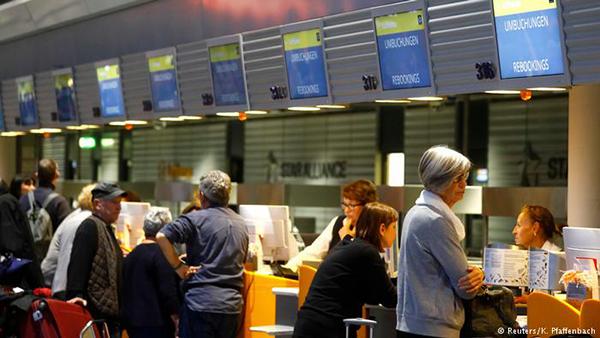 Several hundred flights from Germany’s main airports have been canceled on Tuesday, affecting an estimated 90,000 passengers. Public sector workers across the country are demanding a pay rise of 6 percent.

A one-day “warning strike” has kicked off at airports across Germany, with at least half of scheduled flights delayed or canceled.

“The walkout started in the morning and will probably last until the evening,” said a spokesman for Fraport, the operator of Frankfurt airport — the largest in Germany.

German carrier Lufthansa said in a statement that only 800 of its 1,600 flights would go ahead. Some 90,000 travelers were expected to be affected.

The walkout, led by major German labor union Verdi, aims to push for a pay rise of 6 percent or at least 200 euros ($245) per month for the 2.3 million public sector workers across the country.

The next round of talks over the pay dispute is set to continue in Potsdam on Sunday.

“Without marked wage increases, there will be no landings during this round of negotiations,” Verdi said in a statement on its website.

Lufthansa personnel chief Bettina Volkens criticized the union’s action as “unacceptable,” and noted that the airline itself was not involved in the wage row.

“It is nevertheless our customers and us who are most affected by the consequences of the disagreement,” she said.

Service at airports is set to return to normal on Wednesday, Lufthansa said. Other public sectors, however, are expected to be affected by the strike until Friday.