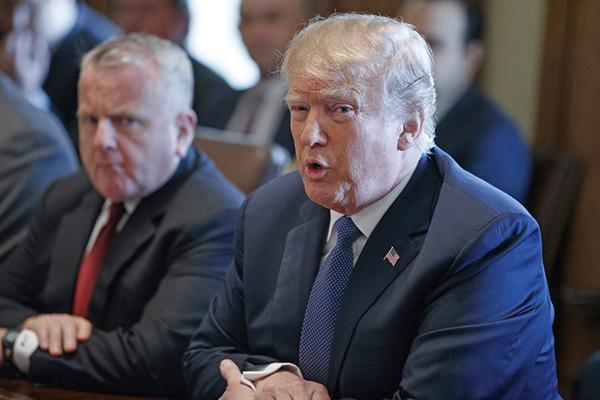 A US military response could come as early as Monday evening after this weekend’s chemical attack on civilians in Syria. That represents something of a turnaround: Last week, President Trump was publicly insisting it was time for US forces in Syria to come home.

APRIL 9, 2018 —President Trump wants to get the United States out of Syria. Yet events in Syria may be pulling the US into deeper involvement in that nation’s desperate civil war.

Chemical weapons are the issue at hand. Over the weekend, the regime of Syrian President Bashar al-Assad apparently unleashed an asphyxiating chemical attack on Douma, a rebel-held suburb of Damascus. Images of the aftermath were heartrending.

“Big price to pay,” Mr. Trump tweeted on Sunday, threatening almost certain retaliation for an action that defiantly crossed a red line established a year ago, when the US ripple-fired cruise missiles at Syrian airfields in retaliation for a similar atrocity.

A US military response could come as early as Monday evening, according to administration officials. That represents something of a turnaround. Only last week, Trump was publicly insisting that it is time for US forces in Syria to pack up and come home, given that ISIS has largely been defeated in the region.

“Let the other people take care of it now!” Trump said at a rally in Ohio.

If only things were that simple. Generations of presidents have discovered that the World War II model of armed intervention – win a big victory, bring troops home, case closed – often doesn’t work in today’s world. We’re still in Korea, Iraq (somewhat), Afghanistan, and other trouble spots. Truth be told, it didn’t work entirely after World War II, given that the US still has forces in Europe.

The president’s public statement last week that he wanted to clear out of Syria took his advisers and the Department of Defense by surprise. Trump’s reasoning was that the main US goal had been reached, with ISIS ousted from the Syrian and Iraqi territory that comprised its self-declared “caliphate.” Yes, Syria’s civil war is going on, but it is clearly tipping in favor of Mr. Assad and his Russian and Iranian allies. That’s not as large a US strategic concern, in Trump’s view. He campaigned on a policy of “America First,” after all.

Aides convinced the president that an immediate withdrawal was impractical. But he made it clear that he wanted the troops out as soon as possible, meaning months at most, not years.

Then came the Douma attack, with images of asphyxiated children and other civilians. This apparently raised a conflicting impulse in the president. “We’re talking about humanity and it can’t be allowed to happen,” he told reporters at the start of a cabinet meeting Monday.

According to Sen. John McCain (R) of Arizona, Trump’s public declaration of impending withdrawal may have emboldened Assad to use chemical weapons for a final push to clear a stubborn rebel stronghold.

But some other experts said the attack highlights reasons why Trump is urging the correct strategy in this case.

“It almost reinforces my contention that we need to get out. This thing is as chaotic and explosive as it gets,” says Daniel L. Davis, a retired Army lieutenant colonel and senior fellow at the think tank Defense Priorities.

There is little or no strategic benefit in continued US involvement in Syria, says Mr. Davis. US forces currently in the region are relatively modest, he says. A continued US presence risks inadvertent fighting between US aircraft or troops and counterparts from Russia, an ally of Assad.

Nor would US retaliation on the scale of last year’s cruise missile attacks do much to deter Assad from future attacks, according to Davis.

“What did we do last year? Twenty-four hours later they were flying aircraft off those airfields. It had zero impact,” he says.

Such a withdrawal would deprive the US of leverage in the region, while abandoning the last vestiges of moderate Arab forces in Syria, according to Anthony Cordesman, the Arleigh Burke Chair in Strategy at the Center for Strategic and International Studies in Washington.

It would expose the Kurdish forces that were crucial in the fight against ISIS to defeat by Assad and Turkey, writes Mr. Cordesman in an analysis of the current Syria situation. It would undermine US trustworthiness in the eyes of Arab regimes, while appearing to grant Iran and Russia a strategic victory.

“It is a dangerous mistake to assume that withdrawal from Syria can come soon, and to act before ISIS is fully defeated, at a time when other extremist movements are gathering power,” Cordesman writes.

Other presidents have faced similar situations. Some were more fraught, with even higher stakes. Think of President Lyndon Baines Johnson, fully aware that victory in Vietnam was a chimera, pouring US troops into Southeast Asia because he did not want to look weak, or risk losing the region to communism.

Trump ran for president insisting he wouldn’t waste US treasure on foreign wars. He also positioned himself as the opposite of President Barack Obama – who, when it came to Syria, didn’t hit Assad when he should have, in Trump’s view.

Thus Trump is now facing contradictory imperatives. He wants to get out, but he also wants to be strong, and he has already set a precedent for trying to punish bad Syrian behavior.