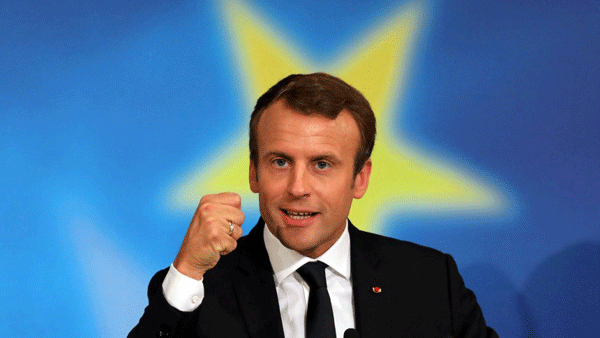 French President Emmanuel Macron has commented on the possibility of a military response to the alleged chemical attack in Syria, the decision will be made soon after consultations with the US and the UK.

According to French President Emmanuel Macron, any French strikes on the Syrian government would target alleged chemical facilities.

France does not want any military escalation in Syria and the Middle East region and also advocates strict observance by all parties of international law, first of all, norms in the field of humanitarian law, Macron said.

At a press conference with Saudi Crown Prince Mohammed bin Salman, an arch-rival of Iran, French President Emmanuel Macron admitted to differences with Riyadh on the 2015 Iran nuclear deal, but said the two agreed on the need to “limit Iran’s ballistic activity and regional expansionism.”

The Saudi crown prince said that the Saudi-led coalition is doing everything to avoid civilian casualties in Yemen, but mistakes in conflicts are inevitable.

German Foreign Minister Heiko Maas, in his turn, has criticized Moscow over its unconstructive behavior in relation to the alleged chemical attack in the Syrian city of Douma and urged the international community to undertake decisive actions in response to the use of chemicals in the city.

Media reports about the alleged deadly chemical attack in Douma emerged on Saturday. The United States and the European Union accused Syrian President Bashar Assad of staging the attack, however, the Syrian authorities denied the allegations.

“The fact that such gas attacks continue, such incidents repeat, and no one is held accountable for such heinous crimes, is inadmissible … Up until now, [Russia] has not been allowing for the possibility to hold a check on the international level and identify the perpetrators … We believe this is unconstructive and unsatisfactory, this cannot continue,” Maas said.

Speaking about the US threats of providing a military response to the Syrian authorities over their alleged involvement in the purported chemical attack in Duma, Maas noted that all avenues should be used, specifically reiterating the Western countries’ expectations to Russia in relation to its actions.

On April, 8, US Homeland Security Adviser Tom Bossert said that the White House was not ruling out military action against Syria amid reports about an alleged chemical attack in the city of Duma.

The White House said on April, 9, that President Donald Trump was considering all options in response to an alleged chemical weapons attack in Duma.

The Russian Center for Syrian reconciliation, operating in the Middle Eastern country, refuted the reports about chemical weapons use in the area of Eastern Ghouta, where Duma is located, saying that no traces of chemical agents were found there.

Moreover, the center said that doctors from Duma had denied media reports about receiving patients with symptoms of exposure to toxic substances.

Russian Foreign Minister Sergei Lavrov said on Monday, that Moscow and Damascus had repeatedly warned about possible provocations involving the use of hazardous substances against civilians aimed at accusing the Syrian authorities of being responsible for such attacks.

The media reports about the chemical attack in Duma emerged amid the withdrawal of the Jaish al-Islam militant group from the city under the agreement with the Syrian authorities.