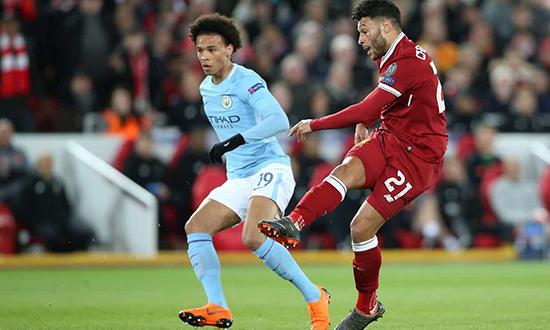 Liverpool will be in box seat in Champions League second leg, with only seven teams in 126 having overturned a 3-0 deficit

They tell a story at Manchester City, going back to the days when European Cup quarter‑finals were for other clubs, about a time when Liverpool, in their pomp, turned up at Maine Road with all their trophies and continental experience and pushed their luck a bit too far.

Those were the years when the Kop at Anfield was in its heyday. City, on the other hand, had a woman named Helen behind one goal whose gimmick was that she would ring a bell – and Ray Clemence found it so off-putting he called them up to complain that it should not be allowed. The Liverpool goalkeeper wanted Helen’s bell confiscated, not perhaps realising she was part of what the club was all about. Helen used to give the home keeper, Joe Corrigan, a sprig of lucky heather before each match and go into the players’ lounge afterwards to collect money for an old people’s home.

Word of Clemence’s complaint seeped out and the next time Liverpool visited Maine Road there were more bell-ringers in the old North Stand than on an average Sunday at Manchester Cathedral.

It is a lovely story, especially if you remember the days in football when it felt as if Liverpool had all the power, the biggest trophy cabinet, the noisiest crowd and the best team. City? Let us just say it was very different from the scene Jürgen Klopp, the current Liverpool manager, encountered when he arrived in Manchester for Champions League press-conference duties. In one of the quieter moments the German could be found in an upstairs room of City’s training ground, gazing out of the window with row after row of pristine football pitches as far as the eye could see. “Is this all City’s?” he wanted to know, and it was unmistakable envy in his voice. The answer was yes. “Wow! Very big, very good.” Melwood, Liverpool’s practice ground, must feel almost Lilliputian in comparison.

None of which will greatly matter, of course, if Liverpool can reach the Champions League semi-finals at the expense of Pep Guardiola’s team and, with a 3-0 lead from the first leg, it would be remarkable if the opportunity was passed up.

In the entire history of the Champions League, there have been 126 other occasions when the odds have been stacked this way. Of those, only seven teams have saved themselves in the return leg. Or to put it another way, City have a 5.6% chance, applying the lesson of history. One goal from Liverpool, remember, means the Premier League champions-elect will need five.

Barring a remarkable feat of escapology, that will leave City reflecting on a solitary semi-final appearance since the Abu Dhabi royal family started changing the landscape of English football in 2008. The 10th anniversary is coming up in September and the bad news for all City’s rivals is that Sheikh Mansour could feasibly still be in charge in another decade.

Everybody knew what Guardiola meant when he said “sooner or later” City would win this competition. Yet it would still count as a failure of sorts given the expenditure and ambitions of the owners. Chelsea’s first decade under Roman Abramovich resulted in two finals – one victory, the other a penalty shootout defeat – and four other semi-finals.

First things first, however, and Guardiola certainly did not sound as if he thought “the perfect game” was beyond the team chasing a minimum of three goals. “We have 90 minutes, plus extra time, and what we have shown this year is that we can create a lot of chances even in a few minutes. We know that and our opponents know that, too.”

Klopp was not referring to the Manchester weather when he said Liverpool could expect a “thunderstorm” and he made the point that City could conceivably have scored five or six in the first half alone against Manchester United on Saturday. Instead City then conceded three. “They have had a fantastic season, an outstanding season, but they are human beings, thank God,” he said. “They have had two results no one expected but we had to play at our best and United, for sure, had a bit of luck and used it.”

Klopp’s cautionary tone was understandable when even a flicker of complacency, at this level, can be a killer. Take the case of Milan, for example, when a team featuring Kaka, Andriy Shevchenko, Cafu and Paolo Maldini won 4-1 against Deportivo La Coruña in 2004. “We were already thinking about the semis,” Andrea Pirlo later wrote in his autobiography. Deportivo won the return leg 4-0 and the holders were eliminated. “We forgot to play,” Pirlo added. “They were laughing at us that night.”

Liverpool, chasing their first semi-final place in a decade, surely will not be so presumptuous when they are 17 points behind City in the Premier League. Klopp’s team also made full use of the away-goal rule to eliminate United in the Europa League two years ago, and should be optimistic of scoring again if Mohamed Salah is indeed fit enough to explore the theory that, when players run at Nicolás Otamendi, the centre-half can become a bran-tub of errors.

Salah has had the beating of him every time they have met this season and, if that happens again, it could be decisive for a Liverpool team that has already scored 37 times in their previous 11 Champions League assignments.