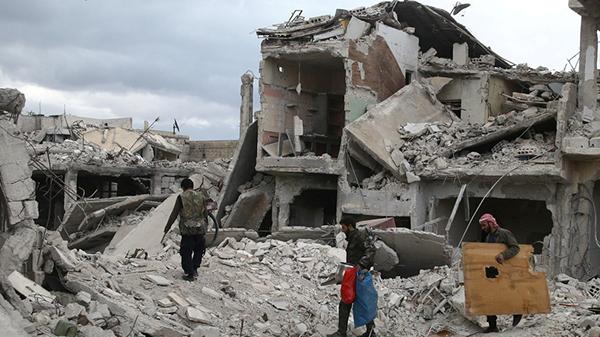 Moscow has proposed to create an independent investigative mechanism into the alleged chemical attack in the Damascus suburb of Douma, promising, along with the Syrian army, to guarantee prompt access for experts to the site.

Russia’s envoy to the UN, Vassily Nebenzia, has reiterated that Russia will support a thorough investigation into the alleged use of chemical weapons in the rebel-held town of Douma over the weekend.

“Let us recall that our draft resolution to set up such a mechanism is in blue. And we stand ready to adopt it today if necessary,” Nebenzia said, referring to the Russia-sponsored UNSC resolution to establish an independent investigative mechanism under the auspices of the Organization for the Prohibition of Chemical Weapons (OPCW).

Moscow is ready to serve as a guarantor of security for those OPCW experts who would inspect the site of the incident, Nebenzia added, stressing the need for the probe to be carried out without delay. The experts may “immediately, tomorrow, fly to Damascus,” the diplomat said.

“There, the Syrian authorities and Russian troops will provide conditions to travel to the area of the alleged incident for them to familiarize themselves with the situation,” Nebenzia said, reminding the UNSC member-states’ representatives that “that is what President Trump and other western leaders called upon us to undertake.”

The Syrian Permanent Representative to the United Nations Bashar Jaafari said his country is also ready to welcome the OPCW team as soon as possible and to provide them with everything necessary for a comprehensive investigation.

“My country, Syria, stresses its unlimited cooperation with the OPCW to fulfill the commitments stated in the convention of the prohibition of the development, production, stockpiling and use of chemical weapons,” he said.

Highlighting the importance of a swift investigation, Nebenzia noted that it should be conducted on the ground, and not through third parties. Moscow has repeatedly criticized the OPCW investigation into last April’s Khan Sheikhoun incident as “unprofessional.” One of the major flaws of the Joint Investigative Mechanism (JIM), as pointed out by Moscow, was that the whole investigation was conducted remotely. As a result, the findings of the OPCW report, that blamed the attack on the Syrian government, were mostly based on speculation by analysts, accounts by unidentified witnesses and material evidence submitted by third parties with no chain of custody being implemented.

In November, the mechanism’s mandate expired and Moscow vetoed a resolution to extend its authority, arguing that it was effectively “dead” and couldn’t be revived, stressing a need for a new, “professional, objective and unbiased”mechanism to replace its discredited predecessor. Moscow at the time proposed a resolution to create one but it was not passed by the UNSC.

Speaking to the media on Monday, Nebenzia did not specify if Russia would put the resolution to a vote on Tuesday. Meanwhile, US Ambassador to the UN Nikki Haley said she is looking forward to the Security Council voting on the resolution proposed by the US.

The US draft, leaked to the media, implies that Syria might be found in violation of UNSC Resolution 2118 as a result of the investigation by a proposed “Independent Mechanism of Investigation.”  The resolution, adopted in 2013, provided for the destruction of Syria’s chemical weapons stockpiles. Damascus has repeatedly stressed its compliance, denying allegations of the use of toxic agents in the offensives on rebel-held regions.

“The Syrian Arab Republic stresses once again it does not possess any chemical weapons of any type, including chlorine,” Jaafari said at Monday’s UNSC meeting.

The US-sponsored draft “condemns in the strongest terms the continued use of chemical weapons” and also stipulates that measures might be taken against Syria under the UN Charter Chapter 7, which paves the way for the use of force.

Nebenzia denounced the draft, saying that it contains “some unacceptable elements.” “There is nothing there that would meet the high standards of the United Nations Chemical Weapons Convention,” he said.

The UNSC President, Gustavo Meza-Cuadra, Permanent Representative of Peru to the United Nations, said that he expects the countries’ delegations to continue to work on the draft for the rest of Monday and on Tuesday, describing the situation as “very difficult.”