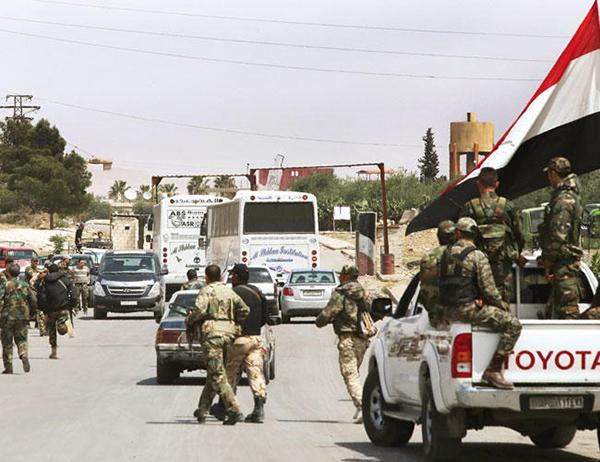 The Syrian regime has drawn global outrage after claims it used chemical weapons in the besieged town of Douma in Eastern Ghouta on April 7 that killed at least 42 civilians, with Turkey also raising strong criticism.

“President Erdoğan expressed concern about the attacks in Douma and Eastern Ghouta and emphasized the importance of preventing civilian deaths and working together to deliver humanitarian aid,” said a Turkish presidential source after telephone talks between the two leaders.

Turkey and Russia have been on opposing sides of the conflict in Syria, as Moscow is the chief ally of the Bashar al-Assad regime while Ankara backs rebels seeking to oust him. Yet Turkey has worked closely in the last months with Russia and Assad’s other main ally, Iran, in what they call a bid to bring peace to Syria. Last week, Erdoğan hosted a summit on Syria in Ankara with Iranian President Hassan Rouhani and Putin.

“We strongly condemn the attack, which there is strong suspicion was carried out by the regime, whose record on use of chemical weapons is known by the international community,” the Turkish Foreign Ministry said in a statement on April 8.

Germany condemned on April 9 the use of chemical weapons in Douma and said the circumstances pointed to the regime of Assad being responsible for the attack.

“The government condemns this new use of poison gas in the strongest terms,” German government spokesman Steffen Seibert told a news conference.

Countries backing Assad’s government should be held to accountable along with the Syrian leader, British Prime Minister Theresa May said on April 9.

“Yes, this is about the actions, the brutal actions of Assad and his regime, but it’s also about the backers of that regime. And of course Russia is one of those backers,” May said during a news conference in Denmark.

France said it would work closely with the United States on a response to the suspected chemical attack.

Presidents Emmanuel Macron and Donald Trump agreed during a telephone call on April 8 that chemical agents were used in the deadly attack, the Elysee Palace said in a statement.

Trump warned there would be a “big price to pay” and called Assad an “animal.”

When asked about the possibility of a U.S. missile strike in response, a top U.S. aide said, “I wouldn’t take anything off the table.”

Just over a year ago, Trump ordered dozens of cruise missiles to be fired at a Syrian air base after declaring there was no doubt Assad had “choked out the lives of helpless” civilians in an attack that he said used banned gases.

The April 7 attack took place in a rebel-held town near Damascus, the capital, amid a resumed offensive by Syrian government forces after the collapse of a truce.

Syrian activists, rescuers and medics said a poison gas attack killed at least 40 people, with families found suffocated in their houses and shelters.

The reports could not immediately be independently verified. Images released by the Syrian Civil Defense White Helmets, a volunteer organization, showed children lying on the ground motionless and foaming at the mouth.

The Assad government, in a statement posted on the state-run news agency SANA, strongly denied the allegations.

The Kremlin warned on April 9 against jumping to conclusions, after Moscow said its experts had found no traces of chemical weapons.

“It’s necessary to examine very carefully what happened in Douma. And it goes without saying that without this information, making any deductions is wrong and dangerous,” Kremlin spokesman Dmitry Peskov told journalists.