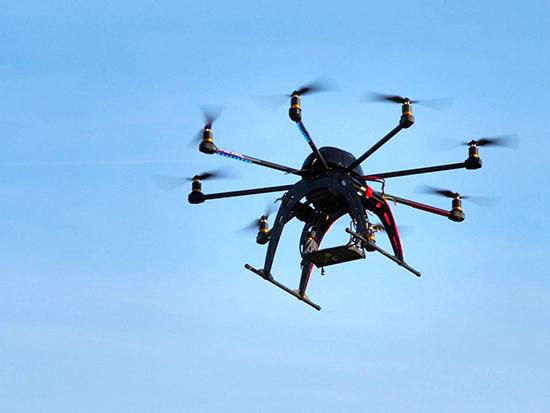 Appearing from nowhere in the past years, civilian drones are now taking flight.

BEIRUT: Whether it’s watching a football match in Beirut’s suburbs, following the trail of the Nahr El Kaleb River to its core, watching performances at the country’s various music concerts, or herding sheep and livestock in Beqaa, what is it that links this variant range of activities together?

They are all things that have been done by small flying robots, better known as drones.

To most people, a drone is one of two very different kinds of pilotless aircraft: a toy or a weapon. It is either a small, insect-like device that can sometimes be seen buzzing around in parks or on beaches, or a large military aircraft that deals death from above.

The first category, recreational drones aimed at consumers, is highly numerous by far; around two million were sold around the world last year, according to research firm CB Insights. However, military drones account for the vast majority of worldwide spending on drones, estimated to be nearly 90 percent.

But after a pivotal year for the civilian drone industry, an interesting space is now opening up in the middle as drones start to be put to a range of commercial uses.

Last year around 110,000 drones, technically known as unmanned aerial vehicles, or UAVs, were sold for commercial use, according to fact-based IT and business consultancy, Gartner. That figure is expected to rise to 174,000 in 2018, and the number of consumer drones to 2.8m.

“Although unit sales of commercial drones are much smaller, total revenues from them are nearly twice as big as for the consumer kind,” the report said.

“Of the total of $100 billion likely to be spent on both military and civilian drones between 2016 and 2020, the commercial segment would be the fastest-growing, notably in construction, accounting for $11.2 billion, agriculture at $5.9 billion, insurance at $1.4 billion, and infrastructure inspection at $1.1 billion,” the report explained.

The rise of commercial drones was made possible by three developments; the first being fierce competition in the consumer market, which made these machines much cheaper, reliable and more capable than they were just a few years ago.

“These are not military products that were downsized; these are consumer technologies that got better,” said Brendan Schulman in a press release, head of policy at Da-Jiang Innovations (DJI), the Chinese firm that dominates the consumer-drone industry.

In many ways, modern consumer drones are more advanced than far more expensive military systems, according to Adham Bou Zayed of FlyQuest, a consumer-drone startup that is attempting to develop a rival to the Mavic.

“The best consumer models are now being redeployed for commercial use, often with little or no modification,” Zayed told Annahar.

He considers that just as with smartphones, people who enjoyed playing with consumer drones realized it made sense to take them to work too. “Even military users are beginning to pay attention to developments in the consumer market,” he added.

The second development is that the global proliferation of consumer drones, which prompted regulations from the military or aviation administration worldwide, has repeatedly delayed introducing rules for commercial drones.

Earlier last month, The Lebanese army warned against flying drones over Lebanese territory particularly over military zones before obtaining a license from the military.

“Any unidentified drones spotted over military zones will be shot down, while their operators will face legal prosecution, due to the dangers these drones pose to state and security institutions, and public safety,” the statement issued by the LAF read.

Many considered the commercial use of drones under a special waiver from the military to be costly and time-consuming.

Aoun explained that with summer approaching, which is known to be the wedding season of the year, his studio has already filed for numerous licenses to use their drones across the country, while being warned to avoid getting military outposts and checkpoints on film as much as possible.

The third development is that the industry’s shake-out of new jostling startups were dominated by DJI, which currently has about 70 percent of the consumer-drone market, and valued at around $8 billion.

The company has established itself as a global premium brand with a reputation for quality and reliability, defying the stereotype of Chinese firms.

To stay in the drone industry, many startups have instead headed toward complementing DJI’s products, by providing software and services for commercial use, instead of competing with the drone giant.

“Everyone is moving to a model where we let DJI control most of the on-board stuff, and we move all our innovation up the stack to the cloud,” Nassib Hajjar, founder of Beirut-based UAV Deploy, a startup that offers drones 3D and 4D mapping software for infrastructure and construction use.

Hajjar considers that pivoting the focus from hardware to software will allow startups and small businesses in the industry to dictate the way these drones are being used since “we are the ones that are programming its brain.”

Having jumped, funding for drone startups is now maintaining a roughly stable altitude worldwide. In 2015, drone firms attracted $479 million in venture capital, up from $149 million the year before, according to CB Insight.

“People are distracted by toy drones and their use in adventurous experiences,” Hajjar noted; but beyond the consumer market, a wide array of potential usages is emerging in construction, agriculture and other industries, as well as public safety.

More speculative usages are on the horizon.

Tiny insect-like drones may one day pollinate plants; big ones might carry not just cargo, but people in self-flying sky taxis; thus, appearing from nowhere in the past years, civilian drones are now taking flight.