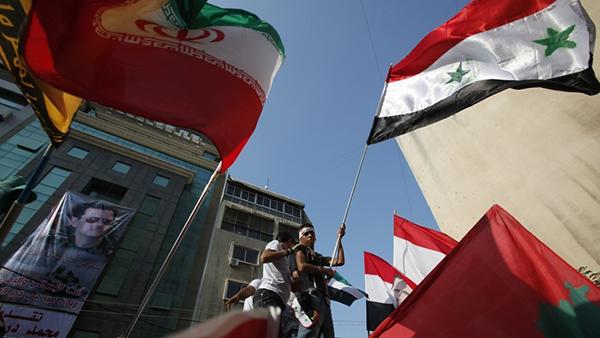 Israel is said to be behind the attack on the T4 airbase where Iran is active.

The Syrian civil war has fast become the Syrian war: Russia and the Assad regime accused Israel Monday of striking a military airport where Iran is known to operate, reportedly killing 14 people. The assault came a day after the U.S. and France, in a statement, vowed a “strong, joint response” to Assad’s alleged use of chemical weapons Saturday in Eastern Ghouta.

Details of the strike on T4, as the Tiyas airbase near Homs is known, are still not fully available. Three members of Iran’s Revolutionary Guard Corps were reportedly among those killed. Israel, which has previously acknowledged attacking targets inside Syria, hasn’t commented. The Assad regime initially saidthe U.S. carried out the strike, but later walked back that claim; Syrian state news then attributed it to Israel. The U.S. military denied involvement.

As Washington debates whether and how to respond to Saturday’s reported chemical attack, the strike on the base was curious not only for its participants but for its location. The U.S. struck near the same base following a chemical attack last year on the town of Khan Sheikhoun, saying the chemical strike had originated there. It’s still unclear what role T4 had in Saturday’s alleged chemical attack in Douma—the base is far from where the attack took place and may not have been involved at all, which raises questions about who ordered the strike, and why. But from the sketchy information available it looks almost like an unrelated move in an Israel/Iran proxy war.

sana, the Syrian news agency, reported that the missiles were fired by Israeli jets in Lebanese airspace. Of eight missiles that were fired, five were shot down, the Russian defense ministry said, and three struck the airbase. Israel says Iran uses the T4 base to transfer weapons to Hezbollah, the Lebanese Shiite militia group with which it fought a 15-year-long conflict in southern Lebanon.

Israeli officials have previously said that one of their goals in Syria is to keep Iran in check and ensure it keeps its distance from the border with Israel. It fears—with some justification—that Iran will use the proximity to the border and access to Shiite fighters to attack Israel. To this end, Israel, which regards Iran’s theocratic regime an existential threat, has struck targets inside Syria dozens of times since the civil war began in 2011. The largest of those attacks, in February, also involved the T4 base.

At the time, an Iranian drone launched from the base entered Israeli territory. In response, Israel struck Iranian targets inside Syria. An Israeli F-16 took Syrian anti-aircraft fire. Two Israeli pilots ejected from the jet and parachuted safely back to their territory. Israel had wanted to stage a larger response, but was reportedly talked back by Russian President Vladimir Putin.

Assad’s choice of allies in the Syrian civil war has all but guaranteed the internationalization of the conflict—and this is true of Iran in particular. The Islamic Republic is involved in all of the major regional conflicts: In Iraq, it is trying to preserve its own interests and that of some of its Shiite allies; in Yemen, it is involved in a deadly proxy war with Saudi Arabia; in Lebanon, it backs Hezbollah; and in Syria, it supports Assad. But as Assad consolidates his victory over the rebels, and isis is all but defeated, Iran’s role may determine the next phase of the Syrian civil war.

Iran is perhaps cognizant of this. Its proxies and fighters were absent from the fighting in Eastern Ghouta and, as Hamidreza Azizi, an assistant professor of regional studies at Shahid Beheshti University in Iran, wrote last week in Al-Monitor, Tehran is aware that its activities in the region are now the focus of U.S. and allied attention. If the tensions with Israel escalate further, Iran has no obvious allies—Russia, its de facto partner in Syria, also has close relations with Israel. Additionally, malign Iranian activity also alienates the Europeans who are trying to save the U.S. nuclear deal with the Islamic Republic (the U.S. is expected next month to withdraw from the agreement).

Meanwhile, Assad is now in full control of Eastern Ghouta, the area outside Damascus that his forces have bombed since February. The alleged chemical-weapons attack Saturday in Douma came before an announcement that the mostly Islamist rebels who occupied the town were leaving the area, handing Assad another major victory. The Syrian leader could not have achieved that victory without the military support of Russia, Iran, and Hezbollah.

The Syrian civil war began in March 2011, and at times it looked as if Assad would go the way of Egypt’s Hosni Mubarak and other Arab leaders ousted by the pro-democracy movements that swept the region. But now Assad looks set to stay in power for the foreseeable future. Even as one conflict in Syria ends, there are already others erupting in its place—and the T4 base could be just the beginning.