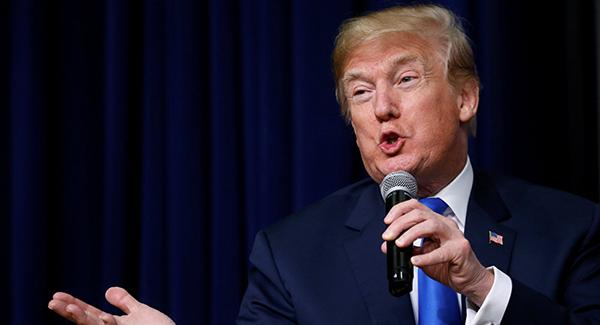 He would not describe the U.S. response or say when it would come. “I don’t like talking about timing,” he said.

Trump ordered a cruise missile strike against a Syrian airbase after a chemical weapons attack on Syrian civilians in April 2017, the first direct American assault on Assad’s forces since the conflict in Syria began in March 2011. Rescue workers and activists said dozens of civilians, including children, died in a chemical attack on Saturday in Douma, a rebel-held town, amid a renewed assault by Assad’s government.

“If it’s the Russians, if it’s Syria, if it’s Iran, if it’s all of them together, we’ll figure it out, and we’ll know the answers quite soon,” Trump said at the beginning of a Cabinet meeting Monday. Asked if Assad’s patron Putin shares responsibility for the attack, Trump answered: “He may. If he does, it’s going to be very tough. He’ll pay a price.”

Trump and French President Emmanuel Macron agreed in a phone call on Monday “to continue their coordination on responding to Syria’s atrocious use of chemical weapons,” the White House said on Monday evening. The two leaders also spoke on Sunday.

“If the red line has been crossed, there will be a response,” French government spokesman Benjamin Griveaux told Europe1 radio.

Russia and Syria have denied using chemical weapons in the country’s civil war, and Moscow’s UN ambassador, Vassily Nebenzia, said at a Security Council meeting on Monday that Saturday’s attack either didn’t happen or was orchestrated by the U.S.

Trump said Monday evening that “we are getting some very good clarity, actually” on who was responsible for the attack. “We have some pretty good answers.”

The president said earlier that he expected the American military to assess who was at fault for the attack within a day.

The White House National Security Council’s principals committee held a meeting earlier in the morning to discuss the chemical weapons attack, a person familiar with the matter said.

Tensions in the Middle East escalated even higher early Monday with an airstrike by unknown warplanes against a Syrian airbase. Russia blamed Israel for the raid; Israel hewed to its customary no-comment policy; and it wasn’t immediately clear whether the facility had a link to the chemical weapons attack. Iran’s Tasnim news agency said Tuesday that the bodies of seven Iranians killed in the missile strike were returned to Tehran.

Trump wasn’t scheduled to be at the NSC meeting Monday but his top national security aides planned to participate, including new National Security Adviser John Bolton, said the person who spoke on condition of anonymity.

Defense Secretary Jim Mattis said he wouldn’t “rule out anything right now” when asked by reporters Monday morning whether the U.S. was considering military actions against Syria including an airstrike.

Trump warned Sunday on Twitter of a “big price to pay” in response to reports of the attack, days after he said he wanted to quickly end the American military presence in the war-torn Middle East country.

While Trump has said he wants U.S. troops out of Syria “very soon,” he posted tweets condemning the attack and charging that Putin and Iran “are responsible for backing Animal Assad.”

The episode thrust the U.S. and Russia into a new confrontation. The Foreign Ministry in Moscow warned that any foreign military strike against Syria over “fabricated” reports of chemical warfare may lead to the “gravest consequences.”

“Another humanitarian disaster for no reason whatsoever. SICK!” Trump said on Twitter.

Syria’s official Sana news agency denied the reports, saying Assad’s rapidly advancing army “doesn’t need to use any chemical weapons as the media channels that support the terrorists are fabricating.” It cited an official it didn’t identify.

Ali Akbar Velayati, adviser to Iran’s Supreme Leader Ayatollah Ali Khamenei, said the U.S. has falsely accused Syria of using chemical weapons.“Iran will support the sovereignty and territorial integrity of the Syrian government with all its might,” Velayati told state-run IRNA news agency on Tuesday.

Russia’s military backing of Assad helped turn the course of the war in his favor. According to the Tass news service, which cited Major General Yuri Yevtushenko, Moscow plans to send specialists to analyze the scene once militants are expelled from the area. The data would refute claims of chemical use, Tass reported.

— With assistance by Jesse Hamilton, Nick Wadhams, and Arsalan Shahla