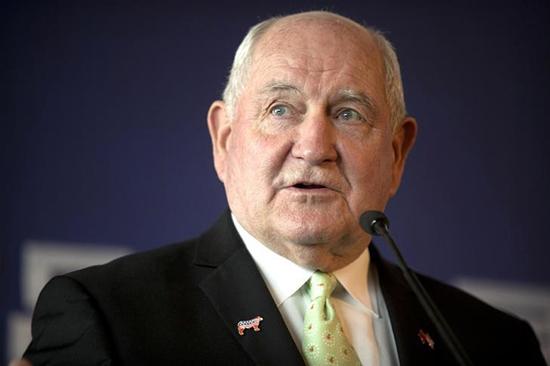 WASHINGTON (Reuters) – U.S. farmers will be protected by the Trump administration during rising trade tensions between the United States and China, Agriculture Secretary Sonny Perdue said on Monday.

“We’re not going to allow agricultural producers to bear the brunt of Chinese retaliation as we defend our own interests,” Perdue said during a speech to the National Rural Electric Cooperative Association in Washington.

He declined to provide details on how that would be achieved. “I don’t think the president’s going to lay all his cards on the table and neither am I. … It wouldn’t be very prudent to give away our playbook and let China know exactly what our plans are to mitigate what they threaten,” Perdue said.

Later on Monday White House spokeswoman Sarah Sanders told reporters at a regular briefing that the Trump administration would present such a plan shortly.

China has responded to an initial U.S. list of proposed tariffs by targeting numerous goods, including agricultural staples like soybeans, the most valuable U.S. agricultural export to China.

Last week the U.S. Department of Agriculture (USDA) said it was looking to find ways to shield farmers from the growing trade conflict between the United States and China, also without providing details of options under review.

Trade tensions with Beijing have escalated since the Trump administration last week threatened tariffs on $50 billion in Chinese goods to combat what they view as deeply entrenched theft of U.S. intellectual property and forced technology transfers from American companies.

Earlier on Monday, U.S. President Donald Trump called the nation’s farmers patriots who would ultimately benefit from his trade policies.

“These are great patriots, and they understand that they’re doing this for the country. We’ll make it up to them and in the end they’re going to be much stronger than they are right now,” Trump said without elaborating.

He cautioned, however, that it could “take a little while.”