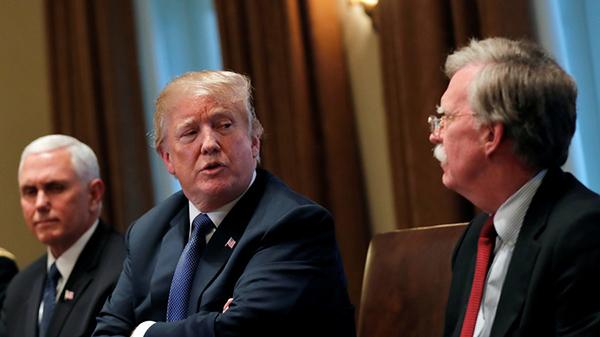 US President Donald Trump has met with military commanders about a possible “forceful response” to alleged chemical attacks in Syria. Washington is ready to act without UN approval, its envoy told the Security Council earlier.

The alleged chemical attack in Syria “will be met and it will be met forcefully,” Trump told reporters on Monday evening. “We can’t let atrocities like we all witnessed… we can’t let that happen in our world,” Trump said, “especially if because of the power of the US, we are able to stop it.”

“We’re getting some very good clarity” on who is responsible for the attack, the president added.

“We have a lot of options militarily, and we’ll be letting you know pretty soon.”

Earlier in the day, US envoy to the UN Nikki Haley spoke of the alleged chemical attack in the Damascus suburb of Douma on Saturday as a proven fact, and blamed Russia and the “monster”Bashar Assad for it.

On Monday, however, Russian and Syrian troops inspected the area, which had been cleared of Jaysh al-Islam (Army of Islam) militants, and found no traces of any chemical agents. There were no patients at the local hospital with any signs of chemical poisoning, either.

“All these facts show… that no chemical weapons were used in the town of Douma, as it was claimed by the White Helmets,” the Russian Reconciliation Center for Syria said in a statement, referring to the controversial group that was among the first to report about the alleged attack.

The center called White Helmets-circulated photos of the alleged chemical attack “yet another piece of fake news.”

No options were off the table in articulating the possible US response, with Defense Secretary James Mattis saying earlier he “would not rule out anything right now.”

Flanked by Vice President Mike Pence and his new national security adviser John Bolton, Trump was mostly asked about the FBI raid on the offices of his personal lawyer. He condemned the “witch hunt” against him over alleged Russian collusion from the very beginning of his campaign, calling it a “disgrace” and an attack on the entire country.

Trump has used harsh words about the alleged chemical attack, calling Assad an “animal” and vowing there would be a “big price to pay” for the purported use of chemical weapons. This echoes his words from a year ago, when the US launched missiles against a Syrian airbase after anti-government militants accused Damascus of a chemical attack in the town of Khan Shaykhun.