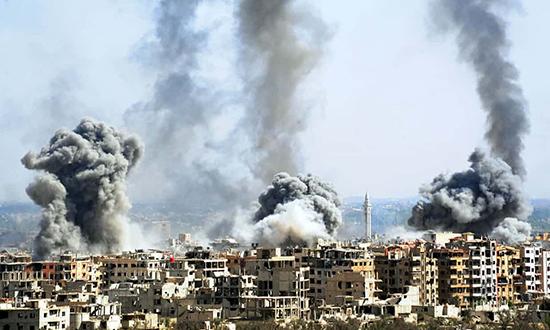 Netanyahu built his career on promising to be a bulwark against Iran, but instead his failures are contributing to the escalation across the Middle East

Clever wheezes in the Middle East have the tendency to not look very smart for very long. A case in point, as has become sharply evident this week, is the much-vaunted “deconfliction” arrangement between Russia and Israel after the former entered the war in Syria on the side of the Syrian president, Bashar al-Assad.

Negotiated between Vladimir Putin and Israel’s prime minister, Benjamin Netanyahu, it was held up at first as evidence of the latter’s diplomatic skills – an arrangement that allowed Israel a free hand against weapons transfers from Iran to Hezbollah and maintained Israeli deterrence on its northern border.

Which outside powers are involved in the Syrian war?

If that arrangement has for long looked very shaky, the reaction of Russia and Iran to Israeli strikes this week on an airbase in Syria, killing seven Iranian advisers, has brutally exposed the assumptions that underlie it, not least Moscow’s tolerance for Israel’s assumption of its freedom of action.

The reality is that Israel – and Netanyahu in particular – has badly misread the trajectory of Russia’s re-engagement in the Middle East, which has created in the very kindest interpretation the context for Iran’s projection of its influence ever further west and ever closer to Israel’s borders.

Why all this matters in the current febrile context following the latest alleged use of chemical weapons in Syria, is that Israel’s misjudgments sit at one corner of a dangerous matrix of unpredictability, perhaps unseen – as James Hohmann argued in the Washington Post – since the secretary of state Dean Acheson suggested in 1950 that Korea was outside the core defence perimeter of the US.

On the American side that uncertainty around intentions has seen Donald Trump flip-flop so dramatically that in a handful of days he has somersaulted from suggesting first that his country was rushing for the exit on Syria to a situation where military strikes seem likely.

In Israel, a wounded Netanyahu – who has built an entire political career on promising to be a bulwark against Iran – is now being confronted with his rhetoric and the consequence of his actions, not least his bloody public pricking of Iran in a way that Tehran may now find hard to discount.

In the final corner there is Putin, whose calculations are opaque because that is his intention – not least over his ambitions and red lines.

The result is a highly combustible situation in which no party to the conflict – direct or otherwise – can be certain of the assumptions that the others are operating under.

All of which has created what Stephen Pinker describes in his illuminating book on violence and war, The Better Angels of Our Nature, as a classic “security” or “Hobbesian” dilemma, a situation where actions by a state ostensibly to heighten their security can prompt other states to act pre-emptively, risking a fugue of escalation. As more violence seems likely, what is also troubling is that the key mechanism for avoiding such an escalation – the UN security council – seems profoundly weakened by the further weaponisation of the US and Russian vetoes under both Trump and Putin.

History teaches us that wars – from the first world war to Korea, the six-day war and the Falklands – are often fuelled by failures of messaging and interpretation.

Looking around the Middle East today never has that felt more true. And never have wise heads been in such short supply.