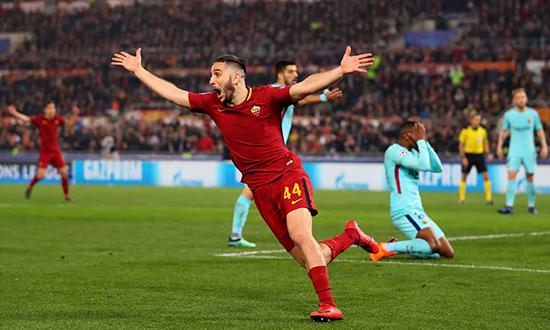 Jacob Steinberg at the Stadio Olimpico

The celebrations went on so long that for a while it seemed Roma’s incredulous supporters would never go home. The sea of red, white and yellow flags in the Curva Sud were lifted with pride, strangers were hugging each other and the anthems floating around the Roman air were still being belted out a good 20 minutes after the conclusion of one of the most remarkable comebacks in the history of the Champions League.

It had been an extraordinary occasion, with one glance off the head of Kostas Manolas in the 82nd minute sparking scenes of pure elation among the locals, and nobody should criticise Roma for reacting as if they had just become the champions of Europe. They achieved something extraordinary, defying the odds on a wild night at the Stadio Olimpico by overhauling a 4-1 deficit to Barcelona from the first leg, and how the underdogs cherished reaching the semi-finals for the first time since 1984.

Barcelona had nowhere to hide. Last year they stunned Paris Saint-Germain in the round of 16, advancing despite being thrashed 4-0 in the first leg, but the shoe was on their leaden foot this time. They were reduced to such a state of disarray that even Lionel Messi was booked for cynically hacking at Aleksandar Kolarov and Ernesto Valverde’s sluggish team could have no complaints about their third consecutive quarter-final exit, even though Roma tortured their fans by leaving it late and almost blew it when a defensive mix-up presented Ousmane Dembélé with an opportunity to rescue La Liga’s champions-elect.

His chip drifted over Alisson Becker’s unguarded goal, however, and the truth is that Barcelona, so insipid until they were behind, deserved to go out. They will be no great loss on this evidence, even if neutrals will mourn Messi’s absence from the last four, and no condescension should be aimed at Roma given that Eusebio Di Francesco’s fearless team finished top of a group that contained Atlético Madrid and Chelsea and beat Shakhtar Donetsk in the last 16. Nothing summed up their defiance more than the players who got their second and third goals. Daniele De Rossi and Manolas both scored at the wrong end in the first leg, leaving Roma with an enormous challenge, but they chose the perfect way to respond, standing tall while their opponents cowered.

Roma, fourth in Serie A, had leaders all over the pitch. “Mission Impossible” was the headline on the front of Gazzetta dello Sport and even the most devoted follower of I Giallorossi could have been forgiven for thinking Barcelona’s advantage was too imposing. Only 11 sides had recovered after losing the first leg by three goals or more in this competition’s 63-year history and Roma faced opponents who had the safety net of Messi’s genius.

But with red smoke billowing out of the brilliantly boisterous Curva Sud and the noise deafening, the hosts wasted no time exposing the frailties in Barcelona’s defence. Alessandro Florenzi’s long pass in the sixth minute was perfectly flighted and the outstanding Edin Dzeko, who had kept the tie alive with his artful poaching in the first leg, bustled Jordi Alba and Samuel Utiti aside before rolling the ball past Marc-André ter Stegen.

Valverde will be criticised for his defensive focus. He opted for pragmatism, starting Sergi Roberto and waiting until the 85th minute to introduce Dembélé and Paulinho, and still Barcelona were overwhelmed in midfield, where De Rossi, Radja Nainggolan and Kevin Strootman were powerful, creative and dominant. Luis Suárez’s only noteworthy contribution was picking up a booking for timewasting and it was strange to think that Barcelona remain unbeaten in the league given how reliant they have become on Messi.

Alisson was protected by his back three and the damage for Barcelona would have been more severe at half-time if Patrik Schick had shown greater precision with two free headers or Dzeko had snuck another effort past Ter Stegen.

The question at the start of the second half was whether Roma would tire after such a frenzied effort. It felt as though any dip in intensity would prove costly, especially when Barcelona began to exert a measure of control in midfield, with Sergio Busquets, Andrés Iniesta and Ivan Rakitic showing signs of gathering their thoughts.

The clock was Roma’s enemy. Yet the mood changed when Strootman hounded Iniesta out of possession in the 55th minute, allowing Schick to run at Umtiti. The forward tumbled and appealed in vain for a penalty but Roma had found a second wind and moments later Dzeko was outmuscling Gerard Piqué, turning and preparing to shoot from close range. Piqué’s foul was desperate and this time Clement Turpin, the French referee, awarded a penalty that De Rossi sent past Ter Stegen.

It was a cathartic moment for the Roma captain, whose team had more than 30 minutes to find the conclusive breakthrough. They tore forward, Ter Stegen saving from Nainggolan and Stephan El Shaarawy, De Rossi heading just wide, and they breathed a sigh of relief when Messi shot straight at Alisson from 18 yards.

That was a reminder of Barça’s lingering threat, yet Roma were far more enterprising and, when Manolas darted to the near post to meet Kolarov’s corner, they were all off the bench to join in the manic celebrations. Even the ball boys were involved. For Roma there were memories to last a lifetime.