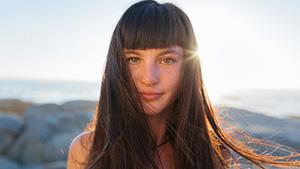 Driving to the gym on a June evening, 17-year-old Grace Russell could not have imagined a devastating stroke was about to leave her fighting for her life. To her, a normal and popular teen taking her A-levels, strokes were something that happened to old people. But in the coming months, while her friends were out socialising and having fun, Grace would be left relearning how to walk, talk, read and feed herself…

Unknown to Grace, of Armitage, Staffordshire, taking the contraceptive pill had left her at risk of a potentially fatal blood clot. “I’d had headaches for a few weeks beforehand, but put it down to exam stress,” said Grace, now aged 25.

“It was a Sunday afternoon. I had felt poorly in the morning with flu-like symptoms, but it was nothing to be worried about. I can remember that my eyes could not focus properly.

“As I drove to the gym I suddenly couldn’t feel my right side. Somehow, I managed to park. I pulled down my sun visor and noticed how droopy my face was. I rang my mum and told her to come and get me.”

Grace’s last memory was of her parents arriving and her mum calling out her name. Grace was taken to A&E in Burton, where she found she could not read sentences and was getting her words muddled up.

“I couldn’t read, write, talk—anything at all.”

“An MRI scan revealed I was having a bleed and a clot on my brain,” she said. “I was screaming in pain.”

Grace was rushed to hospital in Nottingham, where doctors said it was too late for clot-busting drugs and had to perform a craniotomy—removing a third of her skull to allow her brain to swell. She also underwent a tracheotomy and was in a coma for 11 days. She was given just a 20% chance of survival and a 10% chance of even being able to swallow for herself again.

When she woke up, Grace couldn’t move anything on the right side of her body. “I couldn’t read, write, talk—anything at all,” she said. “My mind was fine, but my body wasn’t cooperating. I was trapped in my mind.”

After a month, Grace was transferred back to hospital in Burton and was discharged two months later. A year later, surgeons put a titanium plate in her head.

Grace now suffers from post stroke syndrome, whereby the nerves in her back send pain signals to her brain. “The pain is excruciating,” she says. She takes strong painkillers, but suffers from side-effects, such as loss of appetite and headaches. “Without them I wouldn’t be able to walk or go to work – they are a necessary evil,” says Grace, who was at one point she taking 12 tablets a day and sleeping for 18 hours but still feeling exhausted. Grace is now on a slow-release course of four tablets a day, which she says have made a huge difference.

“As a 17-year-old you think you’re invincible.”

Life after a stroke

Since her stroke, Grace has completed her A-levels, graduated from university and now has a full-time job. “Sometimes I would feel like a 90-year-old woman,” says Grace, who now battles depression. “It has changed my personality. I have a disabled badge and I get abused by old people for using it. I’ve learnt not to judge people.

“As a 17-year-old you think you’re invincible. I was enjoying my life, going out with friends—suffering a stroke wasn’t something that has crossed my mind at all. My granddad had had one, but died before I was born.

“While I was in hospital my friends were going to festivals but I couldn’t. I felt like my body betrayed me – I was very angry and upset, lying in my hospital bed crying. I went through a stage asking, ‘why me?’, ‘what did I do to deserve this?'”

Contraception and the risk of stroke

Grace later learned she has a gene mutation that makes her more susceptible to blood clots, and therefore at risk for stroke. And because some contraceptive pills raise blood clot risk, Grace’s doctors now believe it was her pill that ultimately triggered her stroke.

She never realized taking birth control could put her at risk. “When you go on the pill you are given a big leaflet which refers to things like ‘thrombosis’—no-one knows what that is and they say the odds are ‘one in 5 million’—so you think, ‘it won’t happen to me’ and disregard it.”

Grace believes a blood test should be standard before anyone begins taking the pill. “If I had had one, I wouldn’t have been told to go on the pill. They also didn’t ask for my family history,” she says. “I had no other risk factors at all. I don’t drink, smoke and am not overweight.”

The risk of stroke from using contraception is very low, says Esmee Russell, Head of Prevention and Campaigns at the Stroke Association. “But some types of hormone-based contraception, such as the pill, have an increased risk,” she explains. “This is because they can raise the risk of blood clots forming.”

“Your risk of stroke should be carefully checked before you are given any of these treatments by your doctor,” Russell continues. If you are worried, don’t stop any treatment until you speak to your GP or nurse about your own risk, and the best contraception for you.

A stroke can happen to anyone regardless of age

“It is a myth that strokes only happen to older people. Anyone can have a stroke and it can happen suddenly no matter what age you are.” The Stroke Association says applying its FAST test can help spot the warning signs and stresses the importance of acting fast to help.

FACE: Can the person smile? Has their mouth or eye drooped?

ARMS: Can the person raise both arms?

SPEECH: Can the person speak clearly and understand what you say?

People are most likely to have a stroke after the age of 55, but, according to the charity, in 2010 a third of all strokes happened to people aged between 20-64.