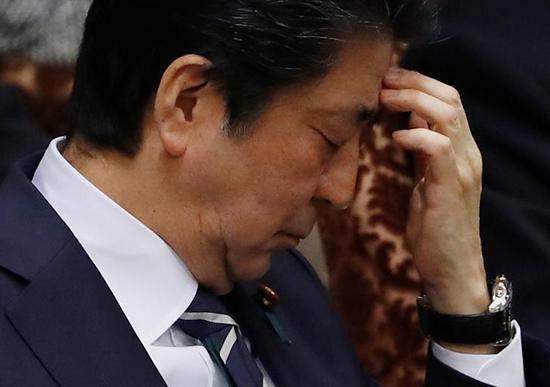 A cronyism scandal embroiling the Japanese prime minister deepened on Tuesday ahead of a summit with U.S. President Donald Trump with a memo media said suggested an ex-aide had helped win approval for a friend of the premier to set up a veterinary school.

Prime Minister Shinzo Abe’s ratings have been hit by several scandals over suspected favouritism and cover-ups, raising questions about how long he can stay in power and his goal of revising Japan’s post-war, pacifist constitution.

His domestic troubles are mounting ahead of the meeting with Trump next week and an expected onslaught over Japan’s trade policies.

The Asahi newspaper said that a former Abe aide, Tadao Yanase, had told local authorities in 2015 that a plan by Abe’s friend for a veterinary school in a government-designated deregulation zone was a “prime ministerial matter” and they should work hard to realise it.

Abe has denied that he ever instructed officials to give preferential treatment to his friend, Kotaro Kake, the director of school operator Kake Gakuen, who wanted to open the school – Japan’s first new veterinary school in more than 50 years.

Yanase, now a senior official at the Ministry of Economic, Trade and Industry, said in a statement he had no memory of meeting authorities in Ehime prefecture or the city of Imabari to discuss the project.

Economic zone status exempts some localities from national regulations such as, in this case, limits on the number of veterinary schools. Kake Gakuen got approval to open the school in a special economic zone in Imabari.

“I met many people every day but as far as I recall, I did not meet people from Ehime prefecture or Imabari City,” Yanase said in a statement.

Yanase added that since the concrete selection process began after he left his post as Abe’s aide, he could not have told outsiders that the issue was a “prime ministerial matter”.

The affair, which emerged last year, is one of several suspected cronyism scandals and cover-ups eroding Abe’s support as he eyes a third term as ruling Liberal Democratic Party leader in a September vote.

Opposition lawmakers on Tuesday repeated calls for Abe to resign, and Shigeru Ishiba, an ex-cabinet minister eyeing a challenge to Abe, told reporters the government had the responsibility to prove its previous statements were correct.

Victory in the September party poll would set Abe, who took office in 2012 pledging to reboot the economy and bolster defence, on track to become Japan’s longest-serving premier.

Support for Abe’s cabinet fell six points to 38 percent in a weekend survey by broadcaster NHK, while his disapproval rate rose seven points to 45 percent, topping his approval rate for the first time in half a year.

Abe has also denied that he or his wife intervened in the sale of state-owned land to another school operator, Moritomo Gakuen, which had ties to Abe’s wife, Akie.

Doubts over the sale deepened on Monday when a finance ministry official said another official had proposed crafting a cover story with the school operator to justify the steeply discounted price.

Abe’s government is also under fire after his defence ministry said the army last year found activity logs from a controversial 2004-2006 deployment to Iraq, but did not tell his predecessor, who had told parliament they could not be found.

The logs could shed light on whether the deployment was to a”non-combat zone” as asserted by the government at the time, in line with constitutional limits on military operations overseas.

“Revelations keep emerging, and I think Abe is in a tough spot,” said Tomoaki Iwai, a political science professor at Nihon University.