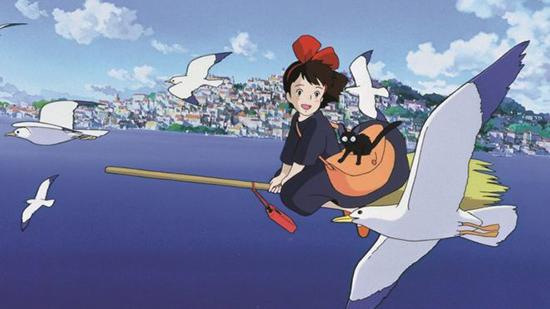 Eiko Kadono’s playful tales about a young witch and her furry companion have entertained generations of Japanese readers, and have now earned her one of the highest honours in children’s literature.

She was inspired to write her most famous series – Kiki’s Delivery Service or Majo no Takkyubin in Japanese – after her young daughter drew a picture of a witch with musical notes flying around it.

“I made Kiki around the same age as my daughter was at that time, just between childhood and adulthood,” Ms Kadono said, according to the Asahi Shimbun.

“It’s all about this kid getting to fly with her own magic.”

Born in Tokyo, Ms Kadono was evacuated from her home at age ten and sent to northern Japan during World War Two.

After the war was over, she attended university in Japan before emigrating to Brazil for a few years.

Some of her works, including Forest of Tunnel and Brazil and My Friend Luizinho, were inspired by her wartime experiences and years in Brazil.

The author describes herself as a “late bloomer”, owing to the fact that she was 35 when her first book came out.

“I was more a reader than a writer. [But] after trial and error, I realised I loved writing,” she told Japanese media at a recent press conference.

“I decided to write throughout my life, even if my works would not be published.”

She has published close to 200 original works, including picture books, stories for young adults and essay anthologies. But her most famous work is undoubtedly Kiki’s Delivery Service.

Image caption Kiki’s has been translated to nine languages, pictured here are the Korean, Mandarin and Thai versions of the book

Originally published in 1985, the story revolves around Kiki, a young witch who travels around on her broomstick with her black cat Jiji.

The series starts with 13-year-old Kiki as she sets out on a year-long apprenticeship for witches in training, and follows her as she tries to find her place in the world despite various setbacks and struggles.

The rest of the series chronicles Kiki as she grows into a young adult and eventually, a mother of two.

Nearly 1.7 million copies of the books have been sold in Japan alone, and the series has been translated into nine languages.

It was later adapted into a film by iconic director Hayao Miyazaki of Japanese animation house Studio Ghibli. The movie became one of Mr Miyazaki’s most popular films.

But what is it about the book that has made it so loved?

“Kiki’s Delivery Service makes children believe that everyone has [their] own magic,” Tomoko Honobe, Ms Kadono’s editor, told the BBC.

“The raison d’etre of children’s literature is giving strength of confidence to children, [enabling them] to become mature.”

And Ms Kadono seems to have some magic of her own.

“She’s just like a good witch, who has all these charms. She is mischievous, chatty, energetic and young,” said Ms Honobe. “I have to work really hard to keep up with her energy.”

‘Words will be your strength’

Last month Ms Kadono found out she had won the Hans Christian Andersen Award, given by the International Board on Books for Young People.

The biennial award is presented to an author whose “complete works have made an important, lasting contribution to children’s literature.”

“I had no idea I could have [such an award],” Ms Kadono said at the award reception.

“It is such an honour… being read by many people, all over the world.”

Yet the acclaimed author says her stories do not belong to her, but rather, her readers.

“The significance of storytelling is, once it is handed to readers, it becomes theirs,” said Ms Kadono.

“[And as] you read and read, you create your own dictionary in you. And those words will be your strength through your life.”

Reporting by the BBC’s Sakiko Shiraishi and Yvette Tan