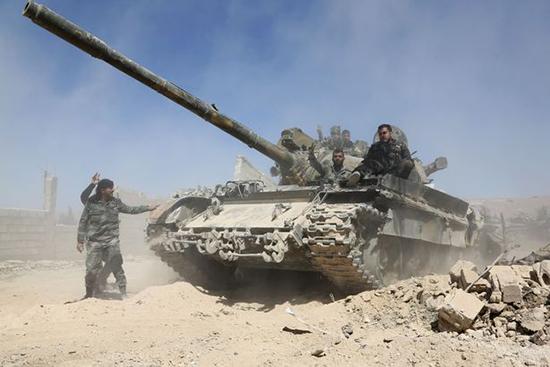 The threat of of war looms as Russia sends troops to Douma, Trump warns “get ready” for missiles and Theresa May says “all indications” point to the Syrian regime. Jeremy Corbyn demanded MPs get a vote on military action

The world is braced for war after Russia announced it will send troops tomorrow into the Syrian town hit by a chemical attack.

It comes just as the 48 hour period Donald Trump said he would use to decide on action expires.

Time is ticking because both sides fear the other could try to destroy evidence of the attack, which left dozens dead including children on Saturday.

Russia claimed today that any US airstrike could be a bid to destroy evidence of the chemical attack – and suggested it was faked by Syria’s White Helmets volunteers.

But UK Prime Minister Theresa May today gave her strongest statement yet laying the blame at Syrian President Assad’s door.

As the world waits to see if she will join with Donald Trump in military action, she declared: “All the indications are that the Syrian regime was responsible.

“We’ll be working with our closest allies to consider how we can ensure that those responsible are held to account, and also how we can prevent and deter the humanitarian catastrophe of the use of chemical weapons in the future.

“The continued use of chemical weapons cannot go unchallenged.”

The world chemical weapons watchdog will hold a special session on Monday, Reuters reported. But US-led calls for an wider inquiry into the attack were vetoed by Russia at the United Nations last night.

He issued the extraordinary threat on Twitter just hours after warnings from senior Russian officials that its military would strike US bomb sites in retaliation to Western aggression.

“If there is a strike by the Americans then … the missiles will be downed and even the sources from which the missiles were fired,” he told Hezbollah’s al-Manar TV.

In response, Mr Trump appeared to pave the way for imminent air strikes, tweeting: “Get ready Russia, because they will be coming, nice and new and ‘smart!'”.

UK Labour leader Jeremy Corbyn demanded MPs get a vote in Parliament on any military action.

He said today: “Parliament should always be given a say on military action.

“That’s a case that I’ve made going back many, many years in parliament.

“Obviously the situation is very serious, obviously there has to be, now, a demand for a political process to end the war in Syria.

“We cannot risk an escalation even further than it’s gone already.”

When asked if she would recall parliament, Mrs May declined to directly answer the question.

Instead she said she was working with allies to prevent and deter the use of chemical weapons.

But Labour left-winger Richard Burgon said: “At no point in my life have I been as genuinely worried for the future of our world.

“Any military intervention could escalate rapidly. Those beating the drums of war need to step back and let the OPCW do their job.”

Lib Dem leader Sir Vince Cable added: “There must be a debate and vote in the House of Commons ahead of any military action.”

The World Health Organization confirmed today that 43 people died in the Douma attack on Saturday from “symptoms consistent with exposure to highly toxic chemicals”.

The figure, specifically for those whose symptoms were linked to chemical exposure, is slightly lower than the 70 reported dead overall previously.

Meanwhile, it appeared Trump’s tweet caught the UK and French Government by surprise.

The US, Britain and France were understood to be seeking to carefully gather further evidence of whether the Assad regime was behind Saturday’s attack on the rebel-held town of Douma, in Eastern Ghouta near Damascus.

In a further astonishing tweet 40 minutes later, Mr Trump added: “Our relationship with Russia is worse now than it has ever been, and that includes the Cold War.

“There is no reason for this. Russia needs us to help with their economy, something that would be very easy to do, and we need all nations to work together.

The war of words between the US and Russia sparked growing concerns that the Syrian civil war could spiral into a broader conflict.

General Sir Richard Barrons, who led UK Joint Forces Command from 2013 to 2016, warned: “I hope the ambassador has chosen his words very carefully.

“What he is actually saying is if the US and allies decide to strike against Syrian chemical weapons and delivery aircraft, not only are they going to try to shoot down the missiles, which they are capable of doing but won’t be with total success.

“But by saying ‘launch platforms’, he’s saying they are going to try and sink ships, sink submarines and shoot aircraft out of the sky.

Speaking this afternoon, the Prime Minister again refused to rule out joining forces with Mr Trump to launch military action against Assad.

She insisted that the “continued use of chemical weapons cannot go unchallenged” and that Britain will work with its “closest allies” to see how those responsible for the latest attack in Syria can be held to account.

all the MP’s will be fine in there hide holes.it will be us fighting the war not them they start it and we have to suffer from there actions.

all the MP’s will be fine in there hide holes.it will be us fighting the war not them they start it and we have to suffer from there actions.