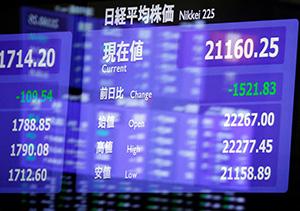 TOKYO (Reuters) – Asian stocks came under pressure on Thursday as the threat of imminent U.S. military action in Syria rattled investors and sent oil prices to their highest levels since late 2014 on concerns about supply.

Trump declared that missiles “will be coming” in Syria, taunting Russia for supporting Syrian President Bashar al-Assad after a suspected chemical attack on rebels. Damascus and Moscow have denied any responsibility.

His comments raised the prospect of direct conflict over Syria for the first time between the two world powers backing opposing sides in the seven-year-old civil war, which has also escalated a rivalry between Saudi Arabia and Iran.

“Last year Russia and Syria did not shoot back against U.S. missiles. But this time the scale of possible attacks by the U.S. and possibly its allies seems larger. If Russia fires back, the war front will be bigger,” said Hidenori Suezawa, financial market analyst at SMBC Nikko Securities.

“I don’t think we are heading into the World War Three but should there be a direct collision between the U.S. and Russia for the first time, that’s the sort of headline that would plunge stock prices,” he added.

The tension intensified in another front as Saudi Arabia said its air defense forces intercepted three ballistic missiles fired at Riyadh and other cities by Yemen’s Houthis.

Fears of military conflicts in the Middle East have boosted oil prices as well as safe-haven assets such as gold.

Both U.S. crude and global benchmark Brent traded at the highest levels since 2014 as geopolitical concerns overshadowed a surprise buildup in U.S. crude inventories.

In the currency markets, the yen was helped by the risk averse mood.

The euro EUR= traded at $1.2370, having risen for a fourth day in a row on Wednesday. Still, the currency has mostly been in a holding pattern since late January.

The Russian rouble steadied on Wednesday after two days of heavy selling due to worries about the Syrian conflict and new punitive sanctions by the United States.

It closed around 62.59 to the dollar RUBUTN=MCX, still down more than 7 percent so far this week.