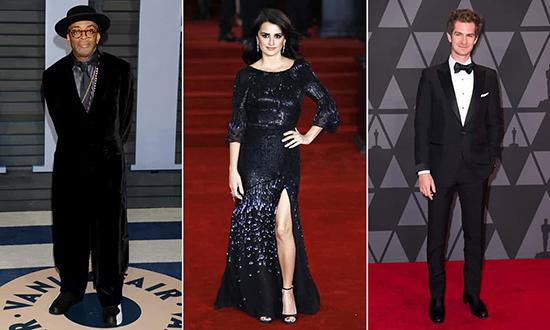 71st edition of the film festival features big names and a global outlook, but only three out of 18 films competing for the Palme d’Or have female directors

The Cannes film festival has announced a 2018 selection that features big names and a truly global outlook – but also some major omissions.

Featured in this year’s lineup are new movies from major auteurs Jean Luc-Godard, Pawel Pawlikowski, Wim Wenders and Spike Lee, as well as a genuine blockbuster in the form of Solo: A Star Wars Story, but expected works by Lars von Trier, Mike Leigh and Terry Gilliam are not present, while the official selection features a lack of women directors in its lineup.

Godard, Pawlikowski and Lee will all debut films in the official competition. Veteran French auteur Godard’s film Le Livre d’Image is a video essay in the style of many of his recent works, while Pawlikowski’s Cold War tells the story of a romance set across multiple countries in the 1950s. Lee, meanwhile, will debut BlacKkKlansman; a crime drama about an African American man who infiltrates a Ku Klux Klan chapter, it is likely to be among the most provocative films in this year’s competition.

The trio are joined in the race for the Palme d’Or by directors from Egypt, Japan, Lebanon, South Korea and China. Also included in the official selection are films by two dissident directors who have been in conflict with the governments of their homelands: Jafar Panahi, who has been banned from leaving his native Iran, will debut Three Faces, while Russian director Kirill Serebrennikov, who has been under house arrest since 2010 over fraud charges, will debut Leto, a drama about the underground rock and roll scene in Soviet Russia. Cannes festival director Thierry Frémaux urged both Russia and Iran to let the directors attend this year’s event.

Another Iranian director, Asghar Farhardi, will open the festival with his film Everybody Knows, a thriller that stars Penélope Cruz and Javier Bardem. David Robert Mitchell moves from horror (It Follows) to film noir with Under the Silver Lake, which stars Andrew Garfield; while Gomorrah and Tale of Tales director Matteo Garrone will present his “urban western” Dogman.

Wim Wenders, meanwhile, will appear out of competition with Francis: A Man of His Word, a behind-the-scenes documentary about Pope Francis’s time as head of the catholic church. The Star Wars spin-off Solo will also premiere out of competition, while Christopher Nolan will present a special 70mm screening of 2001: A Space Odyssey.

While the lineup for this year’s festival was global in scope, there was a notable absence of female directors. Only three of the 18 films competing for this year’s Palme d’Or are directed by women, the same number as at last year’s festival, a situation criticised at the time by Cannes jury member Jessica Chastain.

Discussing the discrepancy, Frémaux blamed wider issues in the film industry. “There are not enough women directors but we don’t have time to talk about that here. Our point of view is that the films are selected for their intrinsic qualities. There will never be a selection with a positive discrimination for women,” he said.

Ahead of what will be the first edition of Cannes since the emergence of sexual misconduct allegations against mogul Harvey Weinstein, a regular attendee at the festival in previous years, Frémaux described the current reckoning over sexual abuse as an “earthquake” moment for both the festival and the industry as a whole. He indicated that the festival would look to change some of its policies in regards to gender equality. “We will discuss equality of salary,” he said. “We want to question our own process about the parity of the juries. The festival director also noted that this year’s festival jury, which will be headed up by Cate Blanchett, would feature more women than men.

However, Melissa Silverstein, founder of activist group Women and Hollywood says that Cannes needs to do more to promote female film-makers. “The Cannes Film Festival is arguably the most important film event in the film world outside of the Oscars. When we don’t have enough women-directed films in the lineup the message received is that women are not good enough.

“If you pay attention to the film community, all around us, the conversation is shifting, and people are pushing for inclusion. It would be great if the Cannes Film Festival was a part of that,” Silverstein added.

Notable too is the absence of several major films that had been tipped for inclusion. There is no place The House That Jack Built, the serial killer drama directed by von Trier. Von Trier had been banned from the festival in 2011 after the director describing himself as “a Nazi” and said that he “understood Hitler”, but had been widely expected to be welcomed back for this year’s event.

Also missing is Leigh’s historical epic Peterloo, while Gilliam’s long-awaited comedy The Man Who Killed Don Quixote cannot be screened at the festival due to a legal dispute between Gilliam and one of the movie’s backers.

It is possible that one or more of those films will be added to the lineup at a later date, with Frémaux promising more news on Von Trier’s film in “a few days”. However, one name that will definitely absent from this year’s lineup is that of Netflix, with the company’s chief content officer Ted Sarandos announcing on Wednesday that none of the streaming giant’s films would be screening at the festival. The move comes in response to a ruling by Cannes that demands that all films competing for prizes at the festival receive a full theatrical release.

Despite the impasse, Frémaux said that Netflix remains “welcome in Cannes. We have an ongoing debate. We want to tell Ted [Sarandos] to come, let’s keep talking.”

The Cannes film festival will be held from 8 to 19 May.