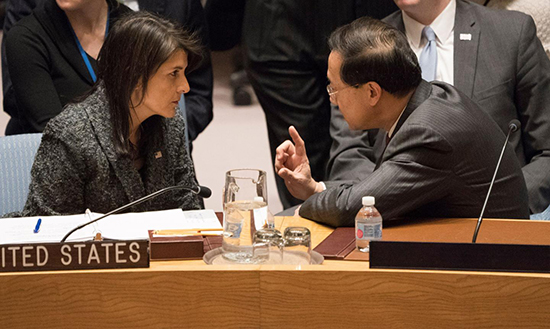 China has urged the U.S. not to take military action against the forces of Syrian President Bashar al-Assad, who some Western governments and their allies have accused of a chemical weapons attack that Beijing said remains inconclusive.

Chinese Foreign Ministry spokesman Geng Shuang told reporters his government was “regretful” after competing U.N. Security Council resolutions regarding the suspected toxic gas incident in the rebel-held Damascus suburb of Douma failed to pass. He said, however, “the pressing concern for now is to conduct a comprehensive, fair and objective investigation on the suspected chemical weapons attack in Syria to find out the truth.”

Both the U.S. and Russia backed opposing bills that both called for an investigation into the incident, but Washington’s would open the door for military intervention against the Syrian military. France, Saudi Arabia and the U.K. may join the U.S. in threatening to attack Syria, despite Russian threats of retaliation and Chinese calls to resolve the matter diplomatically without violating Syrian sovereignty.

“We always believe that political settlement is the only viable way out and military means will lead to nowhere,” Geng said. “China always stands for peaceful settlement of disputes, opposes wanton use or threat of use of force in international relations and acts in accordance with the U.N. Charter.”

China has joined Russia in defending Assad’s government at the U.N. since the early days of a 2011 uprising, which received support from the West, Turkey and Gulf Arab countries. While China has not played a significant military role in Syria’s seven-year civil war or the multinational battle against the Islamic State militant group (ISIS), it has begun to strike lucrative business deals to invest in the reconstruction of Syria as Assad reclaimed territory with help from Russia and Iran.

Beijing has enjoyed good relations with Assad’s Baathist government. Syria’s location at the crossroads of the Middle East and the Mediterranean make it a potentially vital part of Chinese President Xi Jinping’s One Belt, One Road initiative to expand Chinese trade routes across the world. Trump’s vow to send missiles to Syria in defiance of Russian promises to bomb both U.S. missiles and their delivery vehicles threatened to destabilize already torn by conflict.

China has also cast into doubt claims that Assad was behind the alleged chemical weapons attack, calling for a more comprehensive investigation by the Organization for the Prohibition of Chemical Weapons (OPCW). Assad has invited the OPCW to inspect the site of the suspected attack and a Russian military inquiry found no toxic substances.

“Moscow and Damascus repeatedly emphasized that accusations of chemical attacks are ‘lies.’ The Syrian government also welcomed the U.N. delegation to investigate in Douma. The U.S. should give Bashar al-Assad’s regime an opportunity to explain, and wait until the U.N. investigation to act,” The Global Times, an official organ of the ruling Chinese Communist Party, wrote Wednesday, adding that the attack had the potential to spark a direct U.S.-Russia conflict.

“Although Russia’s comprehensive strength has been weakened, it is seeing its strongest capacity in the Middle East. If the US refuses to respect Russia, a nuclear power, it may face terrible consequences. We hope the Trump administration thinks twice before deciding to attack Syria,” it later added.

China and Russia’s militaries have sought stronger relations in recent years, participating in joint drills and exchanging official visits. Newly appointed Chinese Defense Minister Wei Feng offered his support to Moscow earlier this month, saying “the Chinese side has come to show Americans the close ties between the armed forces of China and Russia.”

The official China Military Online also featured Wednesday an op-ed by state-run Xinhua News Agency editor Shao Jie, who said the U.S. said “it is unlikely that the U.S. will resort to large-scale military operations to try to destroy the Assad regime once and for all” and would likely pursue a more limited attack. Last April, Trump ordered a Tomahawk cruise missile attack against the Al-Shayrat air base where the U.S. suspected the Syrian air force carried out another chemical weapons attack days earlier.

China and the U.S. recently went through a tense period of their own as Trump challenged Xi to a trade war of escalating tariffs that risked devolving into a crisis between the world’s two largest economies. Xi sought to calm tensions Tuesday in a speech that sought to open up the economy, but also warned of “a new Cold War and zero-sum mentality.” The U.S. and China remain at odds over territorial disputes in the South China Sea.