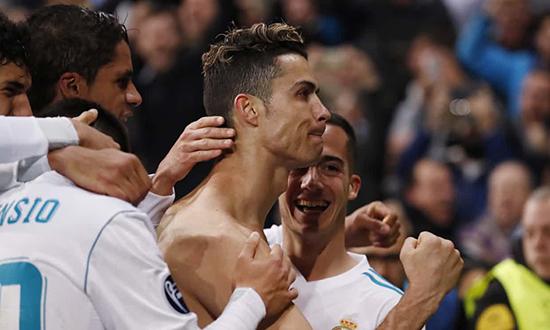 “My heart rate went up a bit but I tried to calm myself down, because I knew it would be decisive,” Cristiano Ronaldo said. All that and it came down to this: 180 minutes reduced to a single moment. A 3-0 victory for Real Madrid in Turin, 3-0 to Juventus in Madrid and then, in the 93rd and final minute, with 39 remaining seconds that would soon be considerably more, Lucas Vázquez went down, nudged by Medhi Benatia. So here they were, a semi-final waiting, everyone watching two men standing 12 yards apart at the north end of the Santiago Bernabéu. Well eventually. One shot but a long time to take it. Juventus surrounded the referee and Gigi Buffon was sent off.

“The referee had a rubbish bin where his heart should be,” Buffon said, while Vázquez insisted: “It’s a penalty, the centre-back arrives and bundles me over. But in a situation like that the protests are normal, it’s the last minute after a great game.” Ronaldo thought differently. “I don’t know why they were protesting but football’s like that,” he said. As he left the stadium, he and Buffon embraced. They had not seen each other when the moment came. Buffon walked, Wojciech Szczesny came on to replace him. All the while, Ronaldo waited.

Szczesny had no time to warm up or touch the ball. Ronaldo, who admitted “the minutes before taking the penalty felt eternal”, had it. Szczesny headed on to his line, where he jumped up and down pushing the bar, making it wobble. Ronaldo, still standing there, took a deep breath and then another, as if trying to force both lungs out with the air that had filled them. He was not the only one. Eventually he began his run, Dani Carvajal way behind him, on his knees and unable to look. The clock had said 92min 21sec when Vázquez went down; by the time Ronaldo struck the penalty it was 96.55.

The nerves he admitted to having were not visible, the ball flying into the top corner – his 15th goal in the competition this season, at least one in every match – and the stadium erupting. “Where does the fear go when it escapes your body?” Jorge Bustos asked in El Mundo. There was a lot of it rushing out. It had been there – “somewhere between your intestines and your throat”, Bustos reckoned – from the start to the end.

Comebacks form part of Madrid’s legend, encapsulated in the phrase uttered by the forward Juanito in 1986. Madrid had been beaten 3-1 by Internazionale in the first leg of a Uefa Cup tie but Juanito warned that the second leg would be different, saying in cod Italian: “Noventa minuti en el Bernabéu son molto longo.” Ninety minutes in the Bernabéu are very long. It was supposed to apply to opponents, not Madrid, but here it was reversed. These 90 minutes were molto, molto longo indeed.

When Juventus scored their first, one minute 16 seconds had gone and it was 8.47pm; when Madrid scored their first, finally ending it, it was 10.40pm. An hour and 53 minutes of suffering and then an explosion. Somehow they had found a way through. On the front of the sports daily AS, the headline said: “From panic to the semi-final.” Madrid had escaped thanks to a “miracle”. In El Mundo, Orfeo Suárez saw Madrid still “on course for their Holy Grail, like Christ resurrected. Cristiano, taking his place standing there in the form of a cross, was as implacable in applying punishment as he was suffering in martyrdom”. Suffering was the word. “Journalists are supposed to say things like: ‘How lovely football is,’” Bustos wrote. “Lovely? Bollocks.”

That is football, though. “There’s not much chance,” Max Allegri had said before the match but Zinedine Zidane insisted: “In football any team can mess things up for you in one move.” He said so even before Barcelona had been knocked out in Rome, and that result came as a timely reminder. Sergio Ramos’s brother, René, used a Spanish phrase that roughly translates as: “When you see your neighbour’s beard shaved off, prepare the shaving foam for yours.” In other words, be warned: what happened to them could happen to you. Watching from the tunnel, suspended, the younger Ramos saw how right he had been. Yet no one had expected anything quite like this, the biggest home defeat Madrid had suffered in this competition.

“Did I think we were going to suffer? Yes. What I didn’t expect was for us to concede in the first minute,” Zidane admitted. “I knew they would pressure us, their coach prepared a great plan and they played a great game. But we didn’t expect a goal after one minute; your head goes down and you give them life.” Juventus reached for it, Madrid clung to it. El Mundo made a play on the chant: “That’s how Madrid win” with a headline that read: “That’s how Madrid suffer.”

Vázquez said: “This was a lesson in football. If you relax or you’re not focused every minute, there is no pardon.” But there was, and this is the way Madrid win, too. They always seem to find a way. They have been under pressure in recent years but progressed; they have trailed and come back; they have been bad, as well as good, and won. And despite the warning – perhaps because of the warning? – this will only reinforce the feeling that Zidane’s side are on course for a third Champions League in a row.

“We knew how to suffer and that goal put us in the semi-final,” Vázquez added. “Juventus forgot that in Europe you have to kill Madrid six times,” Marca wrote. “Football changes, Real Madrid remain: the essence of the Champions League,” said Santiago Siguero.

Manuel Jabois wrote in El País: “The Champions League is a competition in which there are not home and away ties but two slaughterhouses in which it’s not always the cleanest man who survives. That’s why Madrid, a terrorised, trembling team, naked and surrendering, waiting for extra-time like a bullet in the head, won. Juventus passed over Madrid; Madrid, as ever, passed through to the next round. Because of a striker in a trance, a mad man who put the ball on the spot and faced a substitute goalkeeper, then sent a missile into the top corner in the last moment, which is the only way to go into a European Cup semi-final. In the end, Madrid is always everything.”

Ronaldo said: “We suffered and we have to learn. Nobody gives you anything and you have to fight to the end.” But when the end came, standing there alone, it was no longer time to fight; it was time to breathe, steady his heart and take the shot.