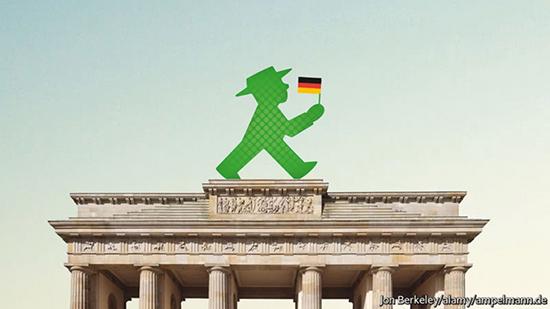 With the right leadership, it could be a model for the West

SINCE the fall of the Berlin Wall the Ampelmännchen, the jaunty, behatted “little traffic-light man” of communist East Germany, has escaped his dictatorial roots to become a kooky icon of Germany’s trendy capital. Tourists pose with life-size models and snap up memorabilia in souvenir shops. The Ampelmännchen’s quirky coolness is an increasingly apt symbol of the country as well as its capital. As our special report in this issue describes, Germany is entering a new era. It is becoming more diverse, open, informal and hip.

At first blush that seems a preposterous suggestion. The Germany of international newspaper headlines is a country with anxious citizens and stagnant politics. Angela Merkel is Europe’s longest-standing political leader, a woman who epitomises traditional German caution. Last September’s election saw a surge in support for the far-right Alternative for Germany (AfD); it took Mrs Merkel six months to cobble together a lacklustre new coalition. To conservative foreign observers Germany is a byword for a reckless refugee policy; to others it is the country that bullied indebted southern Europeans.

But take the long view, and the Ampelmännchen captures how Germany is changing. Post-war German history has moved in cycles of about 25 years. First came the era of reconstruction. Then, from the late 1960s, the federal republic began to reckon frankly with its war guilt. In its latest phase, from the 1990s, Germany has reunified, become a normal country again and shed some of the fetters of its past. Now the wheels of history are turning once more. The Merkel era is drawing to a close. Many of the country’s defining traits—its ethnic and cultural homogeneity, conformist and conservative society, and unwillingness to punch its weight in international diplomacy—are suddenly in flux.

The biggest change comes from Mrs Merkel’s “open door” policy towards refugees, which brought in 1.2m new migrants in 2015-16. This has confirmed once-homogeneous Germany’s transformation into a melting-pot. A more inclusive identity is emerging—a country that waited until 2000 to extend citizenship to many of those without native ancestors increasingly defines nationality in civic rather than ethnic terms. A patriarchal culture has become more gender-balanced: the share of working-age women with jobs has risen from 58% to 70% in the past 15 years. Germans are divorcing more and marrying less. Even the Mittelstand’s firms are adopting disruptive technologies such as artificial intelligence. And having undertaken no foreign military operations in the half-century to 1999, Germany has sent troops to Mali, Afghanistan and Lithuania.

This is shaking up a society that has long prized stability, opening cultural divides between those who embrace the new Germany and those who hanker for the familiar; between urban and rural voters; between young and old. The emergence of a new generation of more combative lawmakers, the AfD’s arrival in the Bundestag and the battle over the future direction of Mrs Merkel’s Christian Democrats are all stoking debates about the country’s identity.

The outcome will determine the future of Europe’s biggest economy. It will also matter beyond Germany’s borders. The country is grappling with the rise of a more plural society at the same time as many others are doing so. Germans are temperamentally moderate and, thanks to their history, particularly sensitive to the dangers of demagoguery. How they navigate their country’s transition could set an example for others.

At home, the new Germany has shed its post-reunification economic woes and is booming, but it is also ageing fast; the largest age group is the 50-to-54s. Preserving its prosperity requires forward-looking reform. Internet access is patchy and slow; roads and classrooms can be surprisingly shabby; a tangle of red tape restricts service industries; and under Mrs Merkel the retirement age has fallen for some and will soon be lower than in France. The flow of newcomers to Germany can help cushion the demographic crunch, especially if immigration procedures are streamlined, education is improved to break the tight link between background and results, and the strictly regulated German professions are made more accessible.

Abroad, the new Germany could also become a different sort of power. It remains frustratingly prone to a small-country outlook: reluctant to spend enough on defence, to confront the imbalances caused by its trade surplus and to accept more burden-sharing in the euro zone. Yet there are signs of movement. Under pressure from France’s president, Emmanuel Macron, it will reluctantly accept some moves towards euro-zone integration, albeit tentative and insufficient ones. Germany’s vulnerability to trade disruption makes it a natural broker in an age of tariff wars. Last month its new economy minister helped to persuade the White House to suspend planned steel and aluminium duties on the EU and other allies.

Meanwhile, the refugee crisis is expanding German horizons. At its peak Mrs Merkel requested a map shaded to highlight Germany’s true borders: North Africa, Ukraine and Turkey. Then at last year’s G20 summit in Hamburg the chancellor advanced a “Compact with Africa” to accelerate development and improve governance on the continent. Though overhyped and underfunded, it gives a hint of the convening and stabilising role a normalised Germany could yet play.

All of which makes the character of Mrs Merkel’s successor pivotal. Her uncontentious, reactive style has suited her times. But a new Germany requires a different type of chancellor: proactive at home, ambitious abroad and with the skills to persuade German voters of the case for this ambition.

With the right leadership, there is little doubt about the country’s capability. In its latest historical phase alone it has absorbed the sclerotic, ex-communist east, overcome economic crisis in the early 2000s, taken in over 1m poor, often desperate immigrants—and coped. Now, as in the past, it would be a mistake to underestimate Germany. Like the Ampelmännchen, it has a knack for reinvention.