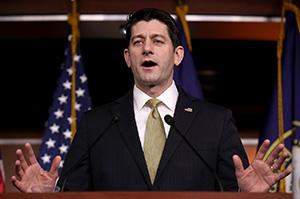 US House Speaker Paul Ryan’s long-rumored decision not to seek re-election is not a huge surprise. But that doesn’t cushion what is a big blow for a beleaguered Republican Party ahead of the midterm elections.

Why is Paul Ryan’s exit important?

First, because of the high-ranking position he holds. As speaker of the House of Representatives, Ryan is not just the administrative head of this Congressional body, he is also, under the US Constitution, number two in the line of presidential succession behind the vice president.

Second, what makes his decision to not seek re-election in the fall midterm elections particularly interesting is the fact that, unlike many of his Republican colleagues in Congress who also announced their retirement, Ryan’s victory in his Wisconsin district was considered likely.

Third, because Ryan’s decision to exit the political scene is a “pretty big blow to morale” for the Republican Party, according to Reed Galen, a Republican strategist who worked on the campaigns of John McCain, Arnold Schwarzenegger and George W. Bush.

“You have to assume that his colleagues, the ones that are not jockeying for his position, are pretty demoralized because they understand that if he quits it means that those guys who are in marginal districts don’t have a lot of chance,” said Galen.

For Vanessa Williamson, a co-author of “The Tea Party and the Remaking of Republican Conservatism” and fellow at the Brookings Institution, Ryan’s exit is a harbinger of tough times ahead for the GOP — even beyond the upcoming elections.

Why did Ryan decide to call it quits?

In his public statement Ryan offered what is arguably the most-often used rationale for politicians vacating a position: more time with family. And that reason may well have played a role in Ryan’s move, especially since he had always credibly maintained that he never wanted to hold the office of speaker in the first place. But it is likely not the whole story.

For Ryan is surely keenly aware, based on his own party’s research as well as public polls, that there is a good chance the Republicans will lose the majority in the House, and as a consequence he will no longer be speaker, but merely minority leader.

For someone who at only 48 already has two decades in Congress and a national campaign as Mitt Romney’s 2012 vice presidential candidate under his belt, that is not an appealing prospect.

That’s why exiting now, for Ryan, “could make perfect sense both politically and personally given the chaos and likely loss of the House and that he does not want to be the Nancy Pelosi of the Republicans,” said Galen, referring to the Democratic lawmaker from California and former House speaker who did not vacate her seat prior to Republicans winning the majority in 2011, and has continued on since as minority leader.

What’s more, exiting two years into President Donald Trump’s tenure might give Ryan — who is said to hold presidential aspirations himself — time and space to try distance himself from an increasingly embattled president with whom he has had a difficult relationship.

“It would make sense in the way of saving your own political hide for the long term,” said Galen. “Ryan understands that this is not getting better over the course of this year, it’s not going to get better in the year three or four of Trump.”

Brookings’ Williamson can appreciate that Ryan may need a respite from leading a fractious Republican Party and working with an unpredictable president, but doubts that he will be able to credible wash his hands of his own key role in the Trump era.

“I don’t think it is plausible at this point to have spent several years working closely with the president and then claim any sort of distance from that presidency, but I can imagine that the experience of working day-to-day with this Republican coalition and with this president would be quite exhausting,” she said.

What does Ryan’s exit mean for the Republicans?

It generally serves as another piece of evidence that the GOP could face a very difficult election this fall. As a consequence of Ryan’s decision, his own Wisconsin district has been reclassified from “Solid Republican” to “Leaning Republican” by the Cook Report, a non-partisan election newsletter.

A likely much narrower majority or an increasingly likely defeat at the polls will almost certainly mean that the arch-conservative Freedom Caucus will gain additional power among a downsized Republican House. That’s because the more moderate Republican candidates, as far as they still exist at all, are the most likely to lose in a possible Democratic wave election.

This, in turn, would only exacerbate the Republican Party’s long-term problems.

“Paul Ryan is really a symptom of a larger problem facing the GOP, which is that they have committed to an agenda and a coalition that is not a nationally viable coalition,” said Williamson. “They rely very heavily on older white people who are an increasingly small percentage of the American electorate.”