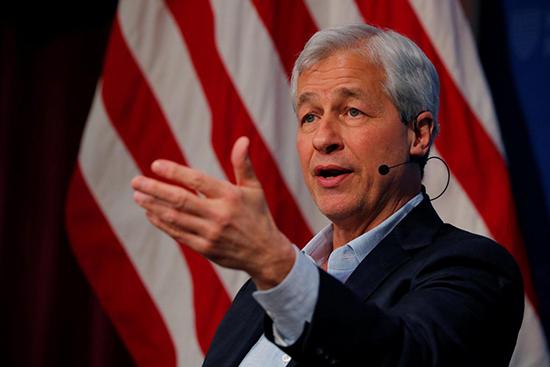 But there will be a downturn at some point, Dimon told the John F. Kennedy Jr. Forum at Harvard University. Asked to assess the chances the U.S. economy would dip into a recession, he said that was a certainty. But he could not say when that might happen.

He said growth for now looked robust as more jobs were being created, wages were rising, consumer credit was strong and the rest of the world was performing relatively well. “I think it should be OK through 2018 and part of 2019,” Dimon said, adding the economy looked “pretty good.”

Speaking at a forum about revitalizing Detroit, Dimon added that good public policies, including streamlining certain regulations, were critical to keeping the economic engine running.

“If you have an idea to build a bridge, it takes 10 years to get the permits … it is a disgrace and it needs to be fixed,” Dimon said.

Speaking just across the river from Boston, Dimon said the bank planned to open branches there. “I said it, we are coming to Boston,” Dimon said.

JPMorgan has already laid out plans to increase its branch network by roughly 8 percent and open about 400 new locations. Besides Boston, Dimon said the bank was eyeing Philadelphia and Washington, D.C.

Dimon said those branches would have fewer tellers but more financial advisers to help solve customers’ problems. He said technology would certainly change the face of banking but that people still needed loans and financial advice. “You use technology to do a better job for clients. I am not afraid at all about technology,” he said.

As head of the biggest U.S. bank, Dimon is often seen as the face of Wall Street. Lately, he has turned more of his attention to advocating for public policies to boost the economy, including infrastructure and job skills training.

JPMorgan has committed $150 million to help revitalize Detroit and Dimon has thrown his weight behind the city’s mayor, Mike Duggan, who also spoke at the forum. The bank’s investment is primarily focused on Detroit’s neighborhoods rather than its downtown.