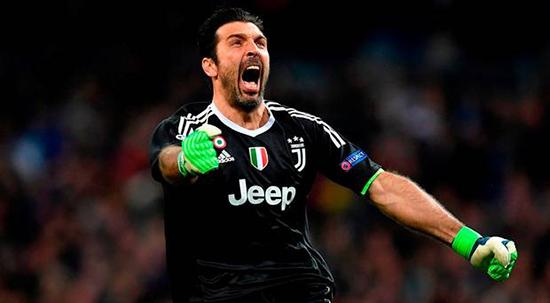 Juventus keeper Gianluigi Buffon offered up an outspoken interview after his side’s Champions League dreams were dashed after an extraordinary night against Real Madrid.

Buffon and his Juve side staged a remarkable comeback as they recovered from a 3-0 first leg deficit to draw the tie level with a stunning performance at the Bernabeu.

Yet there was to be a final twist in the tale as English referee Michael Oliver awarded Real Madrid an injury-time penalty that was converted by Cristiano Ronaldo amid euphoric scenes.

Buffon was sent off before the penalty was taken after he screamed his protest in Oliver’s direction, with his post match comments highlighting his anger.

“It was a tenth of a penalty,” Buffon told Mediaset Premium. “I know the referee saw what he saw, but it was certainly a dubious incident. Not clear-cut. And a dubious incident at the 93rd minute when we had a clear penalty denied in the first leg, you cannot award that at this point.

“The team gave its all, but a human being cannot destroy dreams like that at the end of an extraordinary comeback on a dubious situation.

“Clearly you cannot have a heart in your chest, but a garbage bin. On top of that, if you don’t have the character to walk on a pitch like this in a stadium like this, you can sit in the stands with your wife, your kids, drinking your Sprite and eating crisps.

“You cannot ruin the dreams of a team. I could’ve told the referee anything at that moment, but he had to understand the degree of the disaster he was creating. If you can’t handle the pressure and have the courage to make a decision, then you should just sit in the stands and eat your crisps.”

His rant did not stop there, as he suggested Real Madrid benefited from refereeing mistakes on in both legs of the quarter-final.

“You can have 18 officials, but it’s an issue of sensitivity. You have to have watched the first leg and what happened there, then on a similar incident in the second leg give a penalty at the 93rd minute,” continued Buffon.

“Real Madrid deserved to go through over the two legs, I wish them the best and it has always been an honour for me to face this club, but objectively we at least deserved to go to extra time.

“We started out knowing full well we had 0.0005 per cent chance of doing it. But I am so truly proud to be part of a team that would play like this, work so hard and give everything. I am proud to be with this group of men. Naturally, there is regret and, well, anger.

“The result of the first leg gave normal teams not the slightest chance of dreaming of a comeback. The truth is that we are men of sport, we know how to face games with a consistent advantage and there is the risk of being superficial or laissez-faire. We played on that and gave absolutely everything we had.”