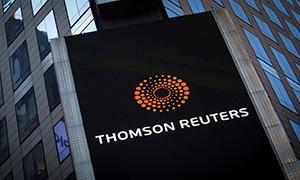 Investment banking fees totalled an estimated US$243.1 million during Q1 2018

According to Thomson Reuters, Middle Eastern & North African investment banking fees totalled an estimated US$243.1 million during Q1 2018, 6% less than the value of fees recorded during Q1 2017. Nadim Najjar, Managing Director, Middle East and North Africa, Thomson Reuters, said: “Debt capital markets underwriting fees totalled US$62.9 million. Despite being down 18% year-on-year, this was the second highest start of the year in the region since our records began in 2000.”

Equity capital markets fees decreased 46% to US$8.4 million, while fees generated from completed M&A transactions totalled US$15.1 million, an 82% decrease from last year and the lowest annual start since 2004. Syndicated lending fees reached a record high of US$156.6 million, up 87% from Q1 2017. Debt capital markets fees accounted for 26% of the overall Middle Eastern & North African investment banking fee pool. Syndicated lending fees accounted for 64%, the highest share of the regional fee pool since our records began in 2000. On the other hand, the share of completed M&A advisory fees fell to its lowest level, only accounting for 6% of the market. Equity capital markets underwriting fees accounted for 3%, the lowest since 2011.

Standard Chartered earned the most investment banking fees in the Middle East & North Africa during Q1 2018, a total of US$25.8 million for a 10.6% share of the total fee pool; also leading in the DCM underwriting league table. Moelis & Co topped the completed M&A fee rankings with 23.2% of advisory fees, while ECM underwriting was led by Al Rajhi Banking & Investment with US$3.1 million in ECM fees, or a 19.1% share. HSBC took the top spot in the Middle Eastern syndicated loans fee ranking.

“The value of announced M&A transactions with any Middle Eastern & North African involvement reached US$13.9 billion during Q1 2018, 7% more than the value recorded during Q1 2017 and a 3-year high,” added Najjar. “Deals with a Middle Eastern and North African target reached an 8-year high rising to US$11.2 billion, up 50% from the same period in 2017 while inter-MENA or domestic deals reached a 5-year high, also up 42% from year-on-year.”

Driven by Total SA’s acquisition of 20% of Umm Shaif and Nasr concession of Emirati state-owned Abu Dhabi National Oil Co for US$1.1 billion, MENA inbound M&A currently stands at an all-time high. At the same time, outbound M&A decreased from US$3.3 billion in Q1 2017 to US$779 million so far this year.
Energy & Power deals accounted for 54% of Middle Eastern and North African involvement M&A by value and despite having the same number of transactions as the financial sector, the latter only accounts for 10.7% of the region’s M&A activity. Goldman Sachs currently leads the Q1 2018 announced any Middle Eastern and North African involvement M&A league table. Rothschild and Morgan Stanley follow in second and third place.

Middle Eastern and North African equity and equity-related issuance totalled US$1.4 billion during Q1 2018, a 158% increase year-on-year. Out of the 6 transactions announced so far this year, 5 have been follow-on offerings, raising a total of US$1.3 billion and accounting for 92% of the quarter’s ECM activity in the region. Orange Egypt follow-on raised US$866 million and stands out as the biggest deal for Q1 2018. EFG Hermes leads the Middle Eastern and North African ECM ranking with a 63.4% market share.

Despite showing a 25% decrease compared to Q1 2017, debt issuance in the Middle Eastern and North African region is at its second highest level since our records began, reaching US$23.9 billion so far this year. The UAE was the most active nation in the region accounting for 33.3% of activity by value, followed by Oman with 29%. International Islamic debt issuance increased 9% from Q1 2017 to reach US$13.6 billion so far during 2018.

Standard Chartered currently leads in the Middle Eastern and North African bond ranking for Q1 2018 with a 16% share of the market, while CIMB Group Holdings took the top spot for Islamic DCM issuance with a 15% share.

A copy of the Thomson Reuters Deals Intelligence Investment Banking Analysis is attached in pdf format. A financial glossary of terms and concepts related to the financial markets can be found at www.glossary.reuters.com

Thomson Reuters is the world’s leading source of intelligent information for businesses and professionals. We combine industry expertise with innovative technology to deliver critical information to leading decision makers in the financial and risk, legal, tax and accounting, intellectual property and science and media markets, powered by the world’s most trusted news organization. Thomson Reuters shares are listed on the Toronto and New York Stock Exchanges (symbol: TRI). For more information, go to www.thomsonreuters.com