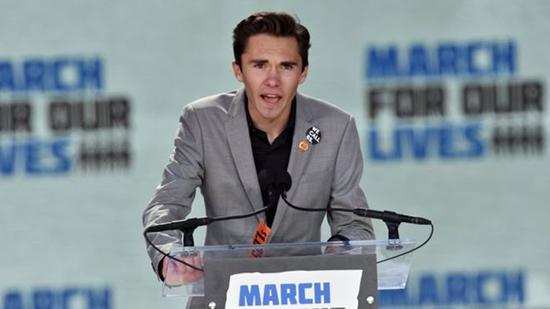 A US TV and radio commentator is off the air after threatening a Florida shooting survivor with sexual assault.

In a tweet, Jamie Allman had said he was “getting ready to ram a hot poker up David Hogg’s ass”.

Mr Hogg is a survivor of the Parkland high school shooting in February and a vocal anti-gun campaigner.

Mr Allman, a conservative commentator, posted the tweet on 26 March.

His page was locked shortly afterwards but a photo of the post has been widely shared online.

Sinclair Broadcast Group, owner of KDNL-TV, announced Mr Allman’s resignation and the cancellation of his show The Allman Report in a short statement.

Sinclair owns roughly 200 local television stations across the US.

Meanwhile, a spokesperson for Entercom Communications – operator of KTFK – said the radio station has “parted ways” with Mr Allman and cancelled his show.

Mr Allman is not the first conservative commentator to attack David Hogg.

Laura Ingraham, host of The Ingraham Angle on Fox News, has lost a number of advertisers and was forced to apologise after mocking Mr Hogg for reportedly not getting into the California universities to which he applied, and for his grades.

Ms Ingraham took a week’s leave after tweeting her apology.

However, Mr Hogg has in fact received an offer from UC Irvine, a University of California school in Orange County.

The activist told TMZ he had got an acceptance letter last week.