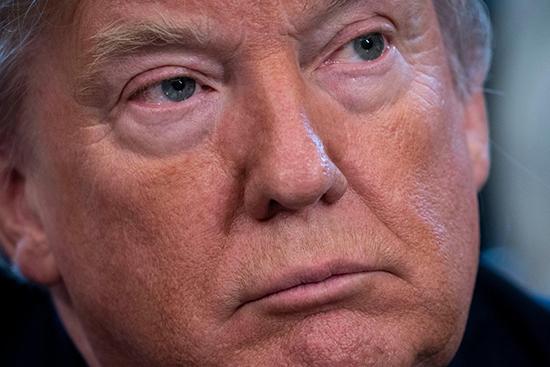 President Trump resembles a Geiger counter: When he emits increasing howls, he is signaling that we’re approaching some radioactive or explosive truth.

Trump is said to be near a “meltdown” in his fury at what he describes as “an attack on our country” — by which he means the ongoing criminal investigation of him. It’s a phrase that he has not used about Russia’s interference with our elections, and my guess is that at some point Trump will fire Robert Mueller, directly or indirectly, or curb his investigation.

Republicans and Democrats alike are pleading with Trump, begging, for the good of the country: Don’t go there. This is larger than Trump. It is a struggle for the idea of equality before the law.

In a narrow sense, firing Mueller might be good for Democrats in November. A Quinnipiac poll this month found that Americans by a 69-percent-to-13-percent majority oppose the firing of Mueller. Even Republicans say by more than a two-to-one ratio that Trump shouldn’t fire Mueller.

It may be that Republicans in Congress would get over their indignation, form a protective circle and try to move on, for that’s what has happened every time Trump has committed some new outrage. So I’m not so sure that “it would be suicide” to fire Mueller, as Senator Charles Grassley, the Iowa Republican, suggested. But even if it wouldn’t quite be suicide, it would be immensely damaging to the entire country.

Trump’s supporters are saying that he could fire Rod Rosenstein, to whom Mueller reports, and appoint an acting replacement who could quietly rein in Mueller. Such a replacement could even go one step further and actually try to “bring an end” to the entire investigation, as Trump’s former lawyer John Dowd urged last month.

But it’s not so simple. “Everything about this is legally uncertain,” Jack Goldsmith, who was an assistant attorney general in George W. Bush’s administration and is now a professor at Harvard Law School, told me.

There are legal disagreements about whether Trump could directly fire Mueller and whether there would have to be a showing of misconduct, and it might well be difficult to find a credible figure to obey instructions and curb the special counsel. In any case, that would not automatically end the separate investigation that led to the raid on Michael Cohen’s files, and it might even fuel state investigations and prosecutions in New York.

If Trump were to recklessly end an investigation into whether he is obstructing justice, that would seem prima facie evidence of obstruction of justice. Trump should have learned something from firing James Comey; that misstep didn’t stop the investigation but assured that Comey’s book will be a best seller when it comes out next week, and handed Comey the ABC interview in which he apparently compares Trump to a mob boss.

Sadly, that’s an apt comparison. Trump’s ethos, ever since he was first sued by the Justice Department for racial discrimination in 1973, has been about cutting corners. He got away with it when he was a businessman buying $100,000 worth of pianos and stiffing the seller.

Now his pattern of behavior may finally be catching up with him; he and those around him may rue the day he was elected president. Trump himself is probably protected from indictment under Justice Department guidelines, and people like Paul Manafort may be counting on a pardon, but the political price of pardons will be increasingly costly — and they won’t provide protection from state prosecutions.

Trump says he’s the victim of a “witch hunt,” but it’s actually a “criminal hunt” — one presided over by Republicans, most of whom he has appointed. He claims persecution, but it’s just embarrassing for a billionaire who is the most powerful person in the world to exhibit a victim complex.

Any attempt to block the investigation would discredit not only Trump but also our country. Foreign policy moves such as a strike on Syria or confrontations with Iran or North Korea would be clouded by the assumption that Trump was tossing us a new and shiny object to chase.

There’s a Latin phrase that goes to the heart of this investigation: “fiat justitia, ruat caelum,” meaning “justice be done, though the heavens fall” — signifying that the law must be followed wherever it leads. Our legal system may in practice sometimes be as ugly as any sausage factory, but it is inspired by a principle as noble and lofty and simple as any: equality before the law.

This isn’t just about Trump, and it’s not just about sex or hush money or even just about collusion with Russia or obstruction of justice. This is about the kind of nation we live in, and whether we aim to be a nation of citizens equal before the law. This is about America.