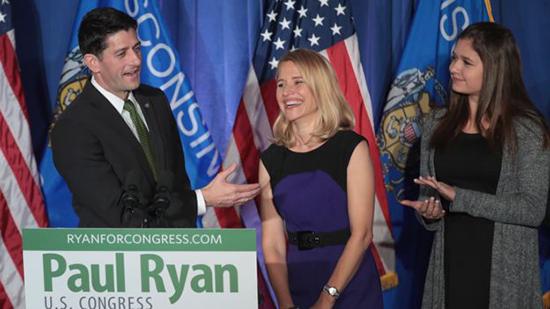 US House of Representatives Speaker Paul Ryan will not run for re-election this year, in a big blow to Republicans with mid-term elections looming.

Congress’ most powerful lawmaker said he would not stand for another term in his Wisconsin district this November.

Republicans already face a tough challenge from Democrats to keep control of the lower chamber.

Mr Ryan joins nearly 30 House Republicans who have announced this year they are retiring outright.

Democrats need 23 seats to take over the House.

In a Wednesday morning news conference, Mr Ryan said the decision was family-related.

“You all know that I did not seek this job,” he said. “I took it reluctantly.

“But I have given this job everything. I have no regrets whatsoever for having accepted this responsibility.”

He continued: “But the truth is it’s easy for it to take over everything in your life and you can’t just let that happen.”

The 48-year-old father-of-three said he did not want to be known by his children as “only a weekend dad”.

Mr Ryan said he would retire in January after finishing his congressional term.

Paul Ryan had to be coaxed into taking the speaker’s gavel in 2015 and never seemed to relish the job. Rumours had been swirling in conservative circles for months that he was eyeing the exits.

The speaker will frame his decision as one of putting family first – and, with young children, the fundraising and legislative duties of the office are burdensome – but it’s impossible not to view the move in a larger political context. He’s had frequent clashes with Donald Trump, and their differences – in temperament and policy – continue to be stark.

A mid-term election looms, and there are at least even odds that a Democrat could be speaker next year. Even if Republicans prevail, their majority will certainly be diminished, making the job of passing legislation through a party already torn between moderates and ideological hardliners all the more difficult.

Rather than go down with the ship – or perhaps suffer the same fate as Tom Foley in 1994, the last sitting speaker to lose a re-election race – Mr Ryan is reserving his seat on a lifeboat. He’s not the first congressional Republican to do so, and with the top man leading the way, more are sure to follow.

According to Axios, which broke the story, he has found his job frustrating, partly because of President Donald Trump.

Mr Trump praised the speaker on Twitter as “a truly good man”.

In an interview with CNN, Mr Ryan explained that he and Mr Trump are “very different people”.

“I’m from the upper Midwest. I’m not from New York, we’re from a different generation. So we have different styles,” Mr Ryan said.

He added that despite having “had a lot of friction in our relationship,” the two men have a “common agenda to agree on”.

“I’m not going to run for president”, he said, concluding: “The last thing I’m thinking about is running for something.”

The Democratic Congressional Campaign Committee said Mr Ryan’s departure was an ominous sign for Republicans, months away from nationwide elections.

Speaker Paul Ryan is a truly good man, and while he will not be seeking re-election, he will leave a legacy of achievement that nobody can question. We are with you Paul!

“Stay tuned for more retirements as Republicans increasingly realise that their midterm prospects are doomed,” the fundraising committee added.

Mr Ryan’s seat in Wisconsin’s first district could now fall into Democratic hands, according to analysts at the Cook Political Report and Sabato’s Crystal Ball.

All 435 House lawmakers and 34 senators will face the voters this November, in what will amount to a referendum on Republican control of Congress and the White House.

The resignation of Mr Ryan – whose role as House speaker places him second-in-line to the president after Vice-President Mike Pence – will spark speculation about whether he could one day mount a White House campaign.

The clean-cut conservative, who has served in the House since 1999, was the Republican vice-presidential running mate for Mitt Romney in 2012.

Love of country compelled Paul Ryan to accept the Speakership, a role he alone could fill at a critical time. He unified the House, passed scores of bills, and led with integrity, honor and dignity. The country will miss Speaker Ryan.

In December Mr Ryan achieved his cherished goal of overhauling the US tax code, and according to Axios, regarded it as the capstone of his legislative career.

Republican congressman Steve Scalise and former White House chief of staff Reince Priebus are among those being touted as possible successors.

Meanwhile, the House speaker whom Mr Ryan replaced – John Boehner – announced on Twitter he is joining the board of a legal cannabis corporation “because my thinking on cannabis has evolved”.

The Ohio Republican, who retired from politics in 2015, once said he was “unalterably opposed” to legalising marijuana.