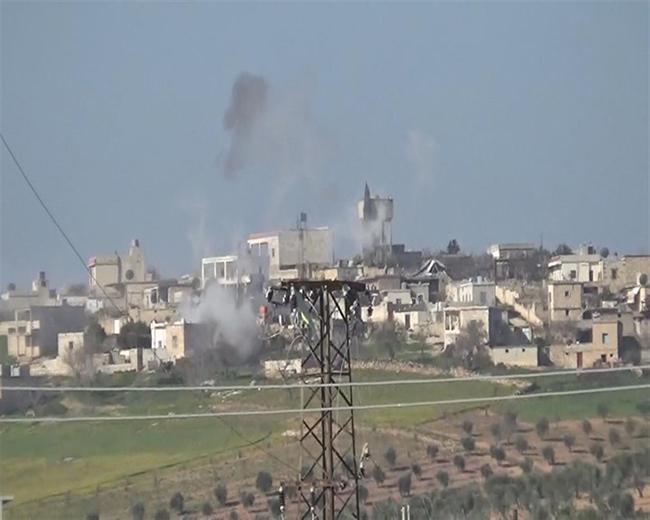 The allegations of chemical weapons use in Syria seem like a front for settling scores between major powers and that was obvious in the recent tweets by US President Donald Trump against Russia.

In one of his tweets on Wednesday, Trump described the relationship with Russia as the worse ever been.

“Our relationship with Russia is worse now than it has ever been, and that includes the Cold War,” he tweeted, a day after his country and Russia clashed diplomatically in the UN Security Council over the draft resolutions to deal with the allegations of chemical weapons use in Syria by the Syrian forces.

But for many observers, the chemical weapons pretext is just a front behind which the US aims at targeting Russia’s interests in Syria, particularly after the Syrian-Iranian-Russian alliance has almost won the war in Syria, while the US side has been largely marginalized.

So the equation is Russia versus US and Israel versus Iran.

Before his tweets on Wednesday, and while commenting on the chemical weapons allegations, Trump said “If it’s Russia, if it’s Syria, if it’s Iran, if it’s all of them together, we’ll figure it out,” he said, adding that Russian President Vladimir Putin, “everybody’s going to pay a price — he will, everybody will.”

After the US warmongering rhetoric against Syria and its allies, Russia warned the US of striking Syria.

Russia’s envoy to the European Union Vladimir Chizhov said his country has warned the US against striking Syria, stating that “Russia has warned US representatives, publicly as well as through proper channels, over the grave consequences that could arise if these strikes happen and whether deliberately or otherwise Russian citizens are hurt.”

Also, Russia’s ambassador to Lebanon Alexander Zasypkin said Wednesday that his country would respond to any US missiles fired at Syria by shooting them down and targeting their launch sites.

In another tweet Wednesday, Trump made remarks about Russia’s remarks of targeting US missiles.

“Russia vows to shoot down any and all missiles fired at Syria. Get ready, Russia, because they will be coming, nice and new and smart!” Trump tweeted.

After taunting Russia in his tweets, Russia’s Foreign Ministry spokeswoman Maria Zakharova said on Facebook that “smart” missiles would destroy any evidence of a suspected chemical weapons attack.

“Smart missiles should fly toward terrorists, not the legitimate government that has been fighting international terrorism for several years on its territory,” she said.

Israel’s Prime Minister Benjamin Netanyahu official twitter account reported that he spoke by telephone with Russian President Vladimir Putin and reiterated that Israel will not allow Iran to establish a military presence in Syria.

“I have a message to the rulers of Iran,” Netanyahu said, warning “Do not put to test Israel’s resolve.”

This comes as Israel targeted the Syrian T-4 airbase in the central province of Homs a couple of days ago, killing 14 soldiers including Iranian fighters amid Iranian warnings.

On Wednesday, Iran vowed to retaliate for the recent attack on the T-4 base in Syria, while blaming Israel for the strike.

Meanwhile, Bouthaina Shabaan, the political and media adviser to President Bashar al-Assad, said Wednesday that her country is not fearing the US threats of striking Syria.

In an interview with pan-Arab al-Mayadeen TV late Wednesday, Shabaan said the US threats of striking Syria aim to make more gains, stressing that consultations are ongoing among the allies of Syria and will not leave things to go Washington’s way.

Shabaan said the results of the Syrian war have come against the Western approach in terms of the emergence of the Russian, Syrian, and Hezbollah alliance, calling it the “alliance of the future.”

The axis of resistance, meaning the Syrian allies of Iran and Hezbollah, has its choices and dealing quietly, Shabaan said, adding that the rule of clashes has changed in favor of the Syrian side.

“The victory of Syria will change the map of the region and the world,” she said, adding that Israel is feverishly trying to prolong the Syrian war “because it would be the biggest loser.”

She said that Israel is the main ignitor of the war on Syria, adding that the Syrian and Russian sides have made all preparations after the Israeli attack on the T-4 airbase a couple of days ago.

Shaaban concluded by saying that Syrian President Bashar al-Assad has always been strong and calm.