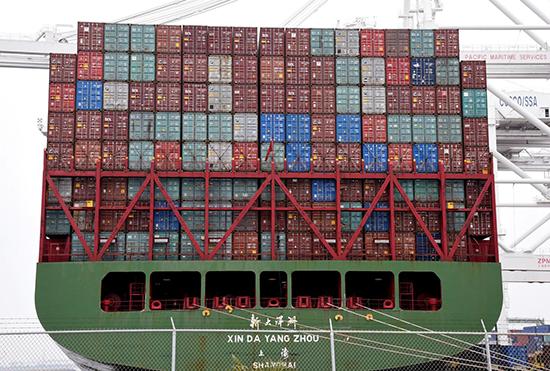 BEIJING (Reuters) – China’s exports growth unexpectedly fell in March, the first drop since February last year, raising questions about the health of one of the economy’s key growth drivers even as trade tensions rapidly escalate with the United States.

March import growth beat expectations, however, suggesting its domestic demand may still be solid enough to cushion the blow from any trade shocks.

That left China with a rare trade deficit for the month, also the first drop since last February.

The latest readings on the health of China’s trade sector follow weeks of tit-for-tat tariff threats by Washington and Beijing, sparked by U.S. frustration with China’s massive bilateral trade surplus and intellectual property policies, that have fueled fears of a global trade war.

China’s March exports fell 2.7 percent from a year earlier, lagging analysts’ forecasts for a 10.0 percent increase, and down from a sharper-than-expected 44.5 percent jump in February, which economists believe was heavily distorted by seasonal factors.

For the first quarter as a whole, exports still grew a hefty 14.1 percent.

Some analysts had expected a pullback in March exports following an unusually strong start to the year, when firms stepped up shipments before the long Lunar New Year holiday in mid-February. That scenario did not alter their view that global demand remains robust.

But a stronger currency could also be starting to erode Chinese exporters’ competitiveness. The yuan CNY=CFXS appreciated around 3.7 percent against the U.S. dollar in the first quarter this year, on top of a 6.6 percent gain last year.

No hard timeline has been set by either Washington or Beijing for the actual imposition of tariffs, which leaves the door open to negotiations and a possible compromise which could limit the damage to both sides.

But with the threat of tariffs hanging over nearly a third of China’s exports to the United States, analysts say its companies and their U.S. customers may try to front load shipments before any measures kick in.

China’s exports to the U.S. rose 14.8 percent in the first quarter from a year earlier, while imports rose 8.9 percent.

China’s total aluminum exports in March rose to their highest since June, just as the United States imposed a 10 percent tariff on imports of the metal on March 23 along with a 25 percent duty on steel imports.

China’s overall March imports grew 14.4 percent from a year ago, beating analysts’ forecast for 10.0 percent growth, and compared with 6.3 percent growth in February.

That produced a trade deficit of $4.98 billion for the month, but such shortfalls are not uncommon early in the year, likely due to seasonal factors.

Analysts expected China would record a trade surplus of $27.21 billion for last month, from February’s surplus of $33.75 billion.

Imports of commodities continued to lead the way in March, with shipments of copper, crude oil, iron ore and soybeans all rising from the previous month.

China’s exports rode a global trade boom last year, expanding at the fastest pace since 2013 and serving as one of the key drivers behind the economy’s forecast-beating expansion.

But the sudden spike in trade tensions with the United States is clouding the outlook for both China’s “old economy” heavy industries and “new economy” tech firms.

Washington says China’s $375 billion trade surplus with the United States is unacceptable, and has demanded Beijing reduce it by $100 billion immediately.

In a move to further force China to lower the billions of goods trade surplus running with the U.S., Trump unveiled tariff representing about $50 billion of technology, transport and medical products early this month, drawing an immediate threat of retaliatory action from Beijing.

China’s tech sector, which is key part of Beijing’s longer-term “Made in China 2025” strategy to move from cheap goods to higher-value manufacturing, may be particularly vulnerable.

Hi-tech products have been among its fastest growing export segments. China exported $137.8 billion worth of high-tech products in the first quarter, up 20.5 percent on-year.