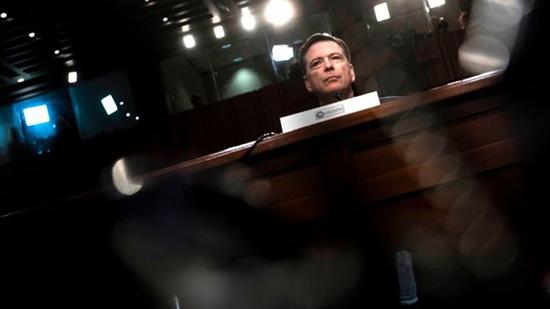 Mr Comey will next week release a book that is expected to paint an unflattering portrait of Mr Trump, who fired him last year.

In an interview, Mr Comey likens Mr Trump to a “mob boss”.

What does Mr Comey say?

According to excerpts of the book obtained by the Washington Post, Mr Comey writes that interactions with Mr Trump gave him “flashbacks to my earlier career as a prosecutor against the Mob. The silent circle of assent. The boss in complete control. The loyalty oaths. The us-versus-them worldview. The lying about all things, large and small, in service to some code of loyalty that put the organisation above morality and above the truth”.

The result was “the forest fire that is the Trump presidency”, he says.

An interview with ABC News will be aired on Sunday, kicking off the book tour.

Preview sales of A Higher Loyalty: Truth, Lies & Leadership have already made the memoir a best-seller on Amazon.

The former FBI boss writes that on at least four occasions Mr Trump raised the matter of the dossier compiled by a former British intelligence official and Russia expert, Christopher Steele, who had been paid to investigate Mr Trump’s ties to Russia.

Mr Comey writes that Mr Trump asked him to have the FBI investigate the allegations – including claims he was once recorded with prostitutes at a Moscow hotel during a 2013 trip – to prove they were untrue because they were painful for his wife, Melania Trump, according to the Washington Post.

He also notes he never saw the president laugh, which he said was a sign of Mr Trump’s “deep insecurity, his inability to be vulnerable or to risk himself by appreciating the humour of others, which, on reflection, is really very sad in a leader, and a little scary in a president”.

In the book, Mr Comey also writes that White House chief of staff John Kelly said Mr Trump’s dismissal of him was “dishonourable”, according to the Daily Beast.

What are Mr Trump’s allies saying?

The website lyincomey.com, set up by the Republican National Committee, emphasises how Democrats pilloried the former FBI director’s handling of an inquiry into Hillary Clinton’s emails.

“All I can tell you is the FBI Director has no credibility,” California Democrat Maxine Waters is shown saying.

To promote the book, Mr Comey plans a series of media interviews, and a CNN town hall address later this month.

“Comey is a liar and a leaker and his misconduct led both Republicans and Democrats to call for his firing,” Republican chairwoman Ronna McDaniel said in a statement to CNN.

“If Comey wants the spotlight back on him, we’ll make sure the American people understand why he has no one but himself to blame for his complete lack of credibility.”

Why was Mr Comey fired?

The firing of the FBI director, who was investigating suspected Russian meddling in the 2016 election, stunned Washington.

The Department of Justice appointed special counsel Robert Mueller to take over the inquiry.

Mr Trump said he fired Mr Comey – who was less than halfway into his 10-year term – due to incompetence.

But the president later added the “Russia thing” was on his mind when he made the decision.

Mr Comey has said little publicly about his experience with Mr Trump, apart from testimony to Congress and a few Twitter posts.

“And they can judge for themselves who is honourable and who is not.”