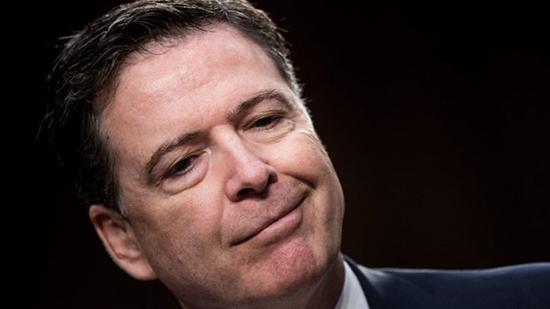 US President Donald Trump is seething about former FBI Director James Comey’s new memoir, which is chock-full of scathing assessments of him.

The publication likens Mr Trump to a mafia boss and details his fixation on unsubstantiated claims he consorted with prostitutes at a Moscow hotel.

But there are some parts the president is unlikely to brand fake news.

Mr Comey says he believes Mr Trump’s hair was his own and his much-mocked hands did not seem unusually small.

He branded him a “weak and untruthful slime ball” and a “proven LEAKER & LIAR”, whom it was his “great honour” to fire in May last year.

The White House and its allies have launched an all-out campaign to discredit the publication, even launching a website, lyincomey.com.

A Higher Loyalty: Truth, Lies & Leadership is due to be published on Tuesday, but advance copies have been obtained by US media outlets. Here is a selection of what’s in it.

Mr Comey, who as a prosecutor earlier in his career helped break up the Gambino crime family, reportedly compares Mr Trump to a crime lord.

He writes that interactions with the president gave him “flashbacks to my earlier career as a prosecutor against the Mob”.

“The silent circle of assent,” he continues. “The boss in complete control. The loyalty oaths. The us-versus-them worldview.

“The lying about all things, large and small, in service to some code of loyalty that put the organisation above morality and above the truth.”

The former FBI boss writes that on at least four occasions Mr Trump raised the matter of unverified claims that he watched prostitutes urinate in a hotel suite during a 2013 Moscow trip.

The allegations surfaced in a raw intelligence dossier compiled by a former British spy who had been hired by Mr Trump’s political enemies to dig up dirt on him.

Mr Comey says Mr Trump angrily denied the claims and asked him to have the FBI disprove them because they were “terrible” for his wife, Melania Trump.

He writes that he first broached the matter at a Trump Tower meeting in January 2017 shortly before the president’s inauguration.

In an interview with ABC News to promote the book, Mr Comey said: “He interrupted very defensively and started talking about it, you know, ‘Do I look like a guy who needs hookers?’

“And I assumed he was asking that rhetorically, I didn’t answer that, and I just moved on and explained, ‘Sir, I’m not saying that we credit this, I’m not saying we believe it. We just thought it very important that you know.'”

Mr Comey added: “I honestly never thought these words would come out of my mouth, but I don’t know whether the current president of the United States was with prostitutes peeing on each other in Moscow in 2013. It’s possible, but I don’t know.”

Ten months after his blockbuster Senate testimony, James Comey is back in the public spotlight. This time, it seems, it’s personal.

There are few new earth-shattering revelations unearthed in Mr Comey’s tome so far, but the former FBI director does shed new light and share new details on the prominent episodes he had extensively discussed last June. What’s changed is the attitude Mr Comey takes when discussing the president.

His book practically drips with disdain for the man in the Oval Office – his personality, his priorities and his overall demeanour. Even without the Russia investigation, it seems highly unlikely these two men would have gotten along.

Now that book excerpts are being shared far and wide, attention turns to the upcoming spate of interviews Mr Comey will undertake in the coming weeks. With his written words, he’s had a chance to give his unchallenged account.

But what about the things he doesn’t want to talk about? Allegations of FBI bias, charges – amplified by Mr Trump – that he’s a leaker and a grandstander? Questions about his handling of the FBI investigation into Hillary Clinton’s email server and the early days of the Trump inquiry?

There may be real bombshells out there, waiting to emerge.

Mr Comey notes that he never saw the president laugh, which he said was a sign of Mr Trump’s “deep insecurity, his inability to be vulnerable or to risk himself by appreciating the humour of others, which, on reflection, is really very sad in a leader, and a little scary in a president”.

He concludes that the president “is unethical, untethered to truth and institutional values”, while his leadership is “transactional, ego driven”.

Mr Comey says Attorney General Jeff Sessions was of little help to him during an Oval Office meeting in February 2017 when Mr Trump allegedly asked Mr Comey to speak privately with him.

The former FBI director has previously alleged that Mr Trump urged him to drop the investigation into national security adviser Michael Flynn, who lost his job after lying about meetings with the Russian ambassador.

Mr Comey says he afterwards confronted Mr Sessions about why he had agreed to leave, saying: “You can’t be kicked out of the room so he can talk to me alone.

“You have to be between me and the president.”

But Mr Comey says Mr Sessions seemed “both overwhelmed and overmatched by the job”.

He “cast his eyes down at the table, and they darted quickly back and forth, side to side.

“He said nothing. I read in his posture and face a message that he would not be able to help me.”

Mr Comey was excoriated by Democrats for reopening the investigation into Hillary Clinton’s emails, a decision she partly blames for her shock loss in the 2016 election.

But the FBI director says he was almost moved to tears in the aftermath of the vote by a private assurance from President Obama about his handling of the Clinton inquiry.

Mr Comey writes that the Democratic president told him in a White House meeting: “I picked you to be FBI director because of your integrity and your ability.

“I want you to know that nothing – nothing – has happened in the last year to change my view.”

The FBI director says he nearly wept as he told Mr Obama: “Boy, were those words I needed to hear. I’m just trying to do the right thing.”

Mr Comey, who is 6ft 8in, says that when he first met the 6ft 3in president-elect he appeared shorter than he did on TV.

“His face appeared slightly orange,” Mr Comey reportedly writes, “with bright white half-moons under his eyes where I assumed he placed small tanning goggles, and impressively coifed, bright blond hair, which upon close inspection looked to be all his.

“As he extended his hand, I made a mental note to check its size. It was smaller than mine, but did not seem unusually so.”