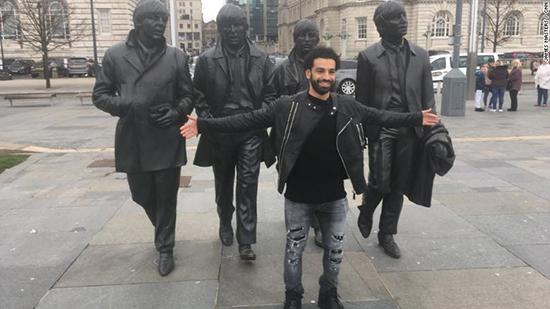 Touring the sights of Liverpool, Salah discusses the unique footballing culture of the city, as well as reflecting on the tie and the atmosphere generated at Anfield in the first leg.

“There’s something very special about playing for Liverpool,” Mohamed Salah tells CNN’s Becky Anderson, ahead of the semi-final draw.

“The Champions League nights are special for the fans too. You can feel it on the streets…
The atmosphere in that first game against Man City was the first time I had really seen something like that.”

Having been tipped as a potential player of the year, it was Salah who brought Liverpool back into the game at the Ethiad Stadium with his 39th goal of the season.

But Salah tells Anderson he wasn’t fazed when the two Premier League sides were pitted against each other in the quarterfinals.

The furore was unbearable and became a factor in the band’s decision to stop touring.

Over half a century later, there’s a new man whipping the city into a frenzy … only he likes it when things get turned up to eleven.

“There’s something very special about playing for Liverpool,” Mohamed Salah tells CNN’s Becky Anderson, as a remarkable debut season in which he has had a direct hand in 50 goals reaches its climax.

Salah has found the net this season with almost metronomic regularity for Liverpool.

More often than not this season the Reds have marched to the relentless beat of Salah’s drum.

On Tuesday it was the Egyptian’s goal that turned the tide in Liverpool’s favor as Jurgen Klopp’s team won 2-1 and 5-1 on aggregate against Manchester City to reach the Champions League semifinals.

“The Champions League nights are special for the fans too,” says the 25-year-old, who joined from Roma for a club-record fee of $49 million. “You can feel it on the streets.”

“The atmosphere in that first game against Man City was the first time I had really seen something like that.”

‘We had to be positive’

Just over a week ago, Pep Guardiola’s celebrated City side visited Anfield having fallen to a single league defeat all season.

Heralded by some as the greatest team in Premier League history, tipped by others to finally contend for a first Champions League title, City’s players trudged off with their heads down and the quarterfinal tie all but over.

As he has so often done this season it was Salah who sparked that win, scoring the first goal in Liverpool’s 3-0 victory.

Smoke bombs and flares had greeted City’s bus to the chagrin of Guardiola, but it was just another day at the office for Salah, dubbed “the Egyptian King” by adoring Reds supporters.

Having opened the scoring after 12 minutes, Salah then set up the third as Liverpool ran out emphatic winners.

Last weekend it got worse for City, a two-goal lead evaporating against rivals Manchester United at the Etihad.

The sheen of invincibility had gone.

Yet by the time the second leg came around three days later, you’d have been hard pressed to find a Liverpool fan who wasn’t worried.

Nerves were jangling even more when Gabriel Jesus found the net after two minutes to give City a glimmer of hope.

But just as the blue moon looked set to rise, once again Salah came to the fore. It was his 39th goal of the season.

Salah’s torrent of goals has prompted Liverpool fans to come up with a number of songs to honor the Egyptian international’s feats this season. No wonder he looks so at home behind those drums in the Beatles museum.

Salah was speaking to CNN’s Becky Anderson for a sport special entitled ‘Mohamed Salah: Liverpool’s Egyptian King,’ set to be released in the build-up to the 2018 World Cup. Watch Friday’s CNN World Sport at 1230 BST for the Liverpool star’s thoughts on the Champions League semifinals.