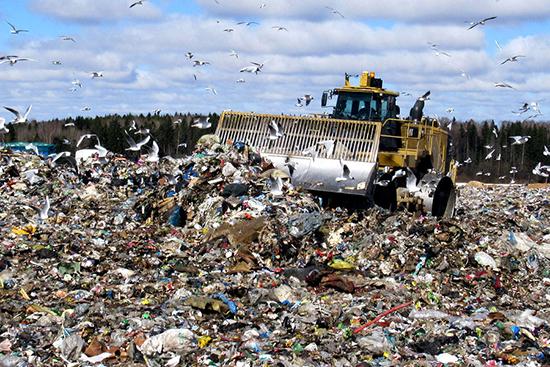 Locals in Volokolamsk say the massive garbage dump outside of their town is poisoning their children. The dump is a byproduct of Russia’s transformation from communist to capitalist society – but the locals’ lawsuit to move it shows that civil society is growing too.

APRIL 12, 2018  VOLOKOLAMSK, RUSSIA—It is early afternoon on Monday, and a dozen grim-faced locals are waiting outside the city court. Most of them are parents.

Their children go to school within a couple miles of an enormous mountain of garbage that hovers on the town’s edge, ever-growing out of refuse created by Russia’s young consumer culture and the rapid expansion of Moscow, some 100 miles away. The children have been getting sick. Few in Volokolamsk have any doubt that the two are connected.

To try to remedy the situation, the parents, with their lawyer, are doing something that may be a first in Russia: file a class action suit on environmental grounds, seeking the dump’s closure and damages for the harm it has done to locals.

Despite the tragic circumstances, the effort – just part of the community’s loud public campaign against the landfill – highlights Russia’s growing space for civil society, and the willingness for Russians to demand more of their government.

“People are getting sick, children are poisoned, and we want that to stop,” says Inna Yeliseyeva, a lawyer representing a growing list of local residents. “People have tried protesting. The authorities didn’t listen. There is still a long line of trucks hauling trash into that dump, and the threat to our health remains. So, we are suing the owners of the dump, which include the city authorities, to make them pay attention.”

The offending landfill is called Yadrovo, and it dominates the surrounding region, about two miles from the city limits of Volokolamsk, an ancient provincial town of about 25,000. Yadrovo was originally designed to be a repository for local rubbish.

But over the past few years Yadrovo has been receiving vast floods of untreated and unsorted garbage from the burgeoning metropolis of Moscow, about 100 miles away. The unending river of trash is simply laid down in layers, covered with sand, and mechanically pressed. For some time, locals have been complaining of evil smells coming off the site.

But one day last month, about 60 children, mostly from a village school located near Yadrovo, sought medical attention for a variety of symptoms, including nausea, dizziness, and nosebleeds. Eight were hospitalized. Few residents seem to doubt that the overpowering fumes wafting from Yadrovo were to blame, though doctors and some local authorities cite different explanations.

“In February my 11-year-old daughter and 12-year-old son fell ill, with nose, throat, and stomach complaints,” says Olga Yegarmina, whose kids go to a school within sight of Yadrovo. “The doctors said it looked like bronchitis, maybe gastritis, and treated them accordingly. But in March my daughter was taken to the hospital again. This time I have a medical document that says ‘intoxication with unknown etiology.’ In other words, she was poisoned. I want answers. That’s why I decided to take part in this lawsuit.”

On March 21, a huge crowd gathered in Volokolamsk’s central square to confront local officials and the governor of Moscow region, Andrei Vorobyov, who hastened to the scene. Things turned ugly. Officials were heckled, Mr. Vorobyov withdrew after being pelted with snowballs, and the head of the district administration, Yevgeny Gavrilov, tendered his resignation a couple days later. Protests continue, with another slated for Saturday. Efforts to discourage them, by arresting three local activists on what appear to be drummed-up pretexts, do not appear to be working.

Several other towns around Moscow face similar garbage overflow crises, including Klin, Troitsk, and Sergiev Posad, but so far only Volokolamsk has attracted much media notice, mainly because it is the one that erupted in an ongoing explosion of public rage. One possible difference in this town is that its elected mayor, Pyotr Lazarev, a Communist, has stoutly resisted pressure from above to stop granting permits for the demonstrations.

“I can’t forbid people to gather in the streets, and I don’t want to,” Mr. Lazarev says. “I live here too. I know everybody and his dog, and they all have my personal phone number. Let them protest until they get answers from the authorities who are responsible for this mess.”

The cost of consumer capitalism

This mess, which might be described as emblematic of late Putin-era Russia, has been brewing for some time and has multiple causes. Like many current problems, it stems as much from the country’s economic successes as it does from systemic drawbacks like corruption, official indifference, unbridled business greed, and bad planning.

Consumer capitalism has taken off in Russia only in the past decade or so. With it has come a blizzard of refuse that Americans have long been familiar with, including plastic packaging for everything, aluminum cans, a multitude of disposable products; and a throw-away culture that didn’t exist in the past. The rapid physical growth of Moscow also generates huge quantities of construction debris that has to go somewhere.

The resulting river of garbage has flowed outward, to regional repositories that only used to handle local refuse. The enormous rubbish tip in Yadrovo has expanded far beyond its original limits in the past few years and, like several others around the region, is no longer a problem that can be ignored.

“In Soviet times most waste was recycled. Bottles, metal scrap, newspapers, were all sorted. There was no such thing as plastic packaging, everything was wrapped in paper. Organic wastes were buried. There was a special organization, Gossnab, that supervised this,” says Alexander Shilov, an expert with the official Russian Presidential Academy of National Economy and Public Administration (RANEPA) in Moscow. “The amounts were much more manageable in those days, of course.”

“But now all that experience is forgotten,” he adds. “Today everything is just buried, with minimal sorting, because it’s cheap and avoids any responsibility. People pay for garbage removal, someone comes and takes it to a garbage dump, and it’s profitable for all concerned. But the problem is reaching critical proportions. Solutions need to be found and tough decisions made.”

Russia’s politics-as-usual, where Mr. Putin plays the role of universal Mr. Fixit, also contributed to the crisis in Volokolamsk. In one of his regular telethons last year, Putin promised a caller from the Moscow region town of Balashikha that a nearby garbage dump making residents’ lives miserable would be shut down. Soon afterwards, it was.

That may have won points for Putin in Balashikha, but everyone acknowledges it only increased the pressure on other regional garbage dumps.

“Over the past three years or so, this crisis has grown to unmanageable proportions,” says Denis Kunaev, a lawyer and local activists. “Authorities didn’t address the problems in any timely way. And much of what they did just made things worse, like closing down some dumps without opening new ones. So, one day here in Volokolamsk we realized that this stinking mountain of garbage was towering over our town and we had to do something about it.”

Another example of the delayed consequences of rapid, unregulated development coming home to roost with a vengeance was last month’s tragic shopping mall fire in Kemerovo, Siberia, which killed 64 people, two-thirds of them children. Thousands of local people took to the streets, stunned by news that fire safety systems didn’t work, doors of a cinema filled with children had been locked, and staff were not trained to deal with emergencies.

Unlike Soviet times – when any bad news was simply suppressed – Russian media covered the protests, allegations of official corruption, and malfeasance, along with the wave of public grief. Politicians were forced to respond. Putin himself came to the disaster scene and promised to punish the guilty. The local governor resigned. Promises were made to improve things.

‘This is civil society in action’

The readiness of the public to protest, and take to the courts for redress, is something new in Russia. It may not be the politicized anti-Kremlin upsurge many Western observers are looking for, but perhaps it’s something more significant: the Russian version of NIMBY, the not-in-my-back-yard grassroots protest movements that constantly force Western politicians and corporations to find compromises in order to satisfy local communities.

“If in the past, people were willing to tolerate these situations [like Yadrovo], now they are not,” says Sergei Davidis, a Moscow-based human rights lawyer. “People are starting to understand that they can struggle against such things and win. They get together, share experiences, organize themselves, and they feel hope. This is civil society in action.”

Russian officials insist they have a plan for dealing with the garbage crisis, which was meant to take effect in 2019. In light of the angry protests in Volokolamsk, it’s being moved forward.

“There will be modern trash-sorting methods, facilities for turning organic wastes into compost, and recycling of many things that are now just buried,” says Mikhail Sylka, vice minister for ecology of the Moscow regional government. “All necessary regulations are in place. We’ve had pilot projects in several districts. People see how things are done in Europe, and they want this here. It’s the task of authorities to implement these solutions.”

That does not, apparently, include closing the Yadrovo dump as local activists are demanding. In fact, an adjacent territory has already been selected to expand it.

“The lack of understanding we had in the past, and inadequate dialogue with the public, has now passed into the form of constructive cooperation,” Mr. Sylka insists. “We’ll be consulting with people. Also actively working to remove the gases from Yadrovo, and resolve problems. Maybe the public will understand us better if there are no unpleasant smells irritating them.”

Local activists are not convinced.

“The thing that makes people most angry is not the situation, but the disinformation we keep getting from authorities,” says Mr. Kunaev. “They need to put an effective system in place to deal with trash, and it has to be comprehensive. They say they’re going to do that, but for years they’ve done nothing as the problem grew. One has the impression that the main task of the politicians is just to talk about solutions, not make them happen.”