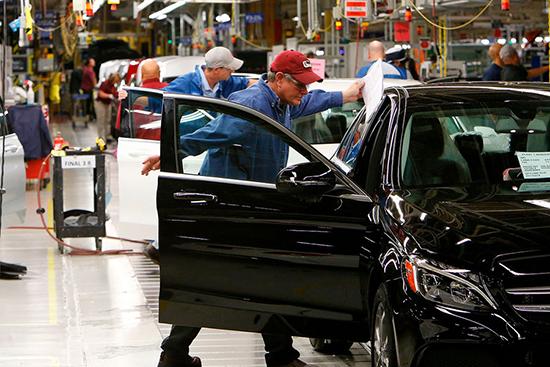 China’s tactics include using industrial policies and state support in a bid for rapid modernization. The Trump administration wants to use American market power to get better deals from trading partners. At risk in the shuffle is a hard-won system of global trade rules.

APRIL 12, 2018  BOSTON AND BEIJING—If US-China trade talks were a TV show – “Game of Tariffs” or “The Good Trade Rep: Season 1” – the ratings would be off the charts. The Trump administration has single-handedly turned a tortuous legalistic process into must-see daytime drama.

The characters are compelling: Is the president a maniacal protectionist, ready to plunge the world into the abyss of a trade war – or a shrewd negotiator who uses unpredictability to keep his opponents off-balance? Is the Chinese premier a master manipulator who bends the world’s trade rules to his own advantage – or a misunderstood protector of the rule of law?

And the plot twists almost daily: Are we on the brink of a breakthrough – or a beggar-thy-neighbor trade war reminiscent of the Great Depression?

While these perceptions play into the almost daily swings of world markets as optimism about the trade talks ebbs and flows, the underlying reality isn’t necessarily complicated. Both sides, trade experts say, are essentially pragmatic, and they actually share a common fear: that adhering to the current rules-based system – that boring legalistic process – puts their nation at a disadvantage. Thus, the real US-China contest is over reshaping the trading system for their own perceived betterment.

“Both see trade as beneficial, but neither side wants to accept certain outcomes of competitive markets,” Mary Lovely, an economics professor at Syracuse University, writes in an email. “China wants to use industrial policies and state support to shape its economy. The Trump administration wants to use American market power to force our trading partners to adopt policies that help us shape our economy [such as tighter rules of origin for auto assembly in NAFTA partners Canada and Mexico]. Neither accepts the damage this behavior does to the rules-based system they both rely upon.”

And that poses a challenge to the whole world trading system. Indeed, should the conflict escalate, it will be the primacy of this rule-based system – even more than the US or Chinese economies – that will be the first casualty, trade experts say. And that is dangerous, they add, because without agreed-upon methods to solve trade disputes, unresolved economic tensions can easily spill over into other areas.

“It’s hard to see how a trade confrontation between China and the United States can be contained within just the trade relationship,” says James Bacchus, a former US trade negotiator and congressman, founding member of the World Trade Organization (WTO) panel that hears trade disputes, and now professor of global affairs at the University of Central Florida. “Inevitably, there will be an overflow of frictions that affect other countries. And those other countries will in turn want to retaliate as well.”

President Trump’s frustration with the current WTO is understandable. With the stall in the latest round of multilateral talks, trade rules have not been updated to deal with the various tactics that China and others have used to try to catch up with developed economies. And even when the rules do apply, the process is tortuous.

Having campaigned on the premise that it was time Americans got a fair deal in international trade deals, Mr. Trump arrived on the scene promising to shake things up. He has followed through, acting like the proverbial “bad cop” after a series of WTO-abiding “good cop” administrations.

For example, the Obama administration had already initiated a WTO case against Chinese aluminum subsidies, but instead of following up, the Trump administration instead chose to slap aluminum and steel tariffs on a number of countries unilaterally. This violates WTO rules, Mr. Bacchus points out, because countries are first supposed to submit trade disputes to the WTO.

A US ‘win’ with South Korea

This pugnacious approach has borne fruit. Last month, facing the threat of 25 percent tariffs on steel, South Korea agreed to cut its steel exports to the US by 30 percent and double the number of US cars allowed into South Korea to 50,000 a year. (American cars aren’t particularly popular, however, and only 10,000 were imported last year.)

The deal is proof, to some, that the “bad cop” approach can work.

“We have all learned by now that we have placed in the Oval Office a master negotiator,” Stephen Moore, a distinguished visiting fellow at the Heritage Foundation and an economic adviser to Trump during the campaign, wrote in an op-ed earlier this month. “Yes, this is a dangerous game Trump is playing for sure…. But Trump recognizes what many of the globalists don’t: the enormous leverage America has on the world economic stage.”

This approach is also reminiscent of Trump’s US trade representative, Robert Lighthizer, who in the 1980s helped negotiate “voluntary restraint agreements” with Japan, which limited exports of cars and other Japanese products to the US.

At the same time, the administration is not ditching the rules entirely. It has announced it’s pursuing a WTO case against China for what the US alleges is a discriminatory licensing procedure. And on Thursday, Trump asked his advisers to look into rejoining the Trans-Pacific Partnership, a multilateral trade pact he roundly criticized during his campaign. The shift suggests that the administration is looking for additional leverage from Asian allies in its efforts to wring concessions from Beijing.

Although the administration’s moves have apparently baffled officials in Beijing, China has so far projected a confident stance in the escalating trade dispute, warning that it will fight back “at any cost.” Last week, a spokesman for the Ministry of Commerce said that the country was preparing to respond with a “fierce counterstrike” if the United States follows through on Trump’s threat to impose even more tariffs on Chinese goods.

Meanwhile, Chinese state media and government officials have seized on the dispute as an opportunity to portray China as a champion of free trade at a time when the US is turning inwards.

The People’s Daily, the official newspaper of the Communist Party, said in a commentary published on Monday that the US suffers from an “anxiety disorder” that stems from its decline on the global stage. The commentary reasserts what many Chinese officials appear to believe: that the Trump administration’s protectionist behavior is motivated by a fear of the rise of China.

Yet there appears to still be room for negotiations that would prevent an all-out trade war. On Tuesday, in a previously scheduled speech, President Xi Jinping pledged to open the country’s economy further by lowering import tariffs on cars and allowing foreign investors access to its finance industries. Mr. Xi also promised to improve intellectual property protection in China and narrow the country’s trade surplus, two things the Trump administration has long called for. About two-thirds of China’s $423 billion surplus last year was with the US.

“China does not seek a trade surplus,” Xi said in his speech. “We have a genuine desire to increase imports and achieve a greater balance of international payments.”

While US trade experts saw little new in the speech, Chinese analysts said it signaled a willingness to keep talks going.

“President Xi Jinping’s speech presents a good opportunity for negotiations,” says Lin Guijun, vice president of the University of International Business and Economics in Beijing. “He was sending a message to the Trump administration. It’s time for the US to respond.”

Even Trump’s sharpest critics say there is still a good chance the two sides can find grounds for an agreement. Despite all the bluster, both sides would prefer to avoid a trade war. A deal could give US companies a way to operate in China without being forced to hand over their technology to Chinese partners.

And from the Chinese side, the threat of the trade dispute gives the government more leverage to pursue desired economic reforms that have been stalled by state-owned enterprises, says Shen Dingli, a professor of international relations at Fudan University in Shanghai.

Risks of a protracted stand-off

But the danger of miscalculation has clearly risen, as both sides look at the same facts and draw different conclusions.

Drawing on their successes in Japan in the 1980s and now South Korea, Trump and Lighthizer may be overestimating the leverage they have in China. After all, Japan and South Korea are allies, who both depend at least in part on the US military for defense. China has no such dependency. And while it’s true that China sells far more to the US than it buys from the US, a trade war wouldn’t slow its large and fast-growing economy by much, economists say.

So China can afford to call Trump’s bluff. If it does, what then?

“Then I think we’re headed toward a scenario where we put our $50 billion worth of tariffs into effect, China does the same, and maybe we put investment restrictions into effect, too,” says Wendy Cutler, vice president of the Asia Society Policy Institute and a former trade negotiator. “Maybe that becomes the new normal. That’s a Plan B and I think it’s a dangerous plan, an unfortunate plan. And frankly, I think the Chinese will have the wherewithal to live through that world better than we will.”

China is capable of overplaying its hand, too. It also looks to Japan and South Korea for lessons in economic development. Both nations used government-directed initiatives, including trade restrictions, to bolster strategic industries. But it’s easy to forget that the US was often willing to overlook those moves, because both nations were key allies during the cold war.

Now that the cold war is over, the US is far less patient on economic issues.

And Beijing is wrong if it assumes that only the US is angry over its trade practices. Despite Xi’s attempts to position his country as a defender of the current trade system, Europe and Japan are also deeply troubled by China’s practices, says Professor Lovely of Syracuse, even if they would prefer a negotiated settlement.