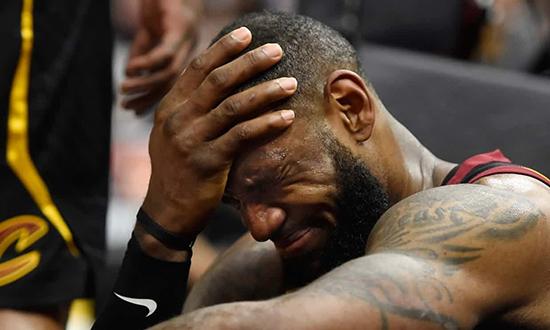 Victor Oladipo scored 32 points and the Indiana Pacers held off Cleveland’s second-half rally for a stunning 98-80 victory Sunday in Game 1 of the Eastern Conference series, handing LeBron James and the Cavaliers’ their first loss in the opening round in eight years.

Indiana was in control from the outset, opening a 21-point lead in the first quarter and leading by 23 in the third. The Cavs stormed back and got within seven, but Oladipo hit a big three-pointer and Bojan Bogdanovic helped put Cleveland away with a three to make it 88-71.

The Pacers completely outplayed the three-time defending conference champions, whose turbulent regular season has carried over into the playoffs.

James scored 24 with 12 assists and 10 rebounds for his 20th career triple-double. But James got little help as Cleveland’s four other starters – Kevin Love, Jeff Green, Rodney Hood and George Hill – combined for 25 points.

This is all new to James, who had won 21 consecutive first-round games and lost a postseason opener for the first time in his 13th playoffs. The 33-year-old is trying to get to his eighth straight NBA finals, and already the path is tougher than imagined.

Cleveland had won 14 straight first-round games, last losing on 22 April 2010, the last season of James’ first stint with the Cavs.

Indiana was swept by Cleveland in last year’s opening round. Those Pacers, though, didn’t have Oladipo or the balance of this Indy squad, which may lack experience but not confidence.

Lance Stephenson, a longtime playoff nemesis for James, helped set the tone in the first quarter with a dunk he punctuated by throwing several punches into the padded basket stanchion.

The Pacers took the fight to the Cavs. They were more physical, more energetic and more composed.

Oladipo has become one of the NBA’s rising stars, and after being a role player in Oklahoma City, he’s Indiana’s main attraction and looked like a seasoned star on the playoff stage. He made six three-pointers, swiped the ball from James on two occasions and more than doubled his previous playoff scored high of 15.

The Cavs fell behind 33-12 during a strange first quarter that included Cleveland missing all eight three-pointers, James not attempting his first field goal until 1:52 remained and fans in Quicken Loans Arena wondering what they were seeing.

As he does for every postseason, James shuts down all social media activities, a routine he calls Zero Dark 23 Mode. And this time, he began it Saturday by posting a quote on Instagram from Martin Luther King Jr: “Darkness cannot drive out darkness, only light can do that.”

The Pacers drove him into a darker place.

James Harden scored 44 points and powered a big fourth-quarter run that allowed the Houston Rockets to outlast the Minnesota Timberwolves 104-101 on Sunday night in Game 1 of the first-round playoff series.

Minnesota scored four straight points to get within 3 with about 30 seconds left. Chris Paul added two free throws after that for Houston, but a tip-in by Karl-Anthony Towns got Minnesota back within 3. After a bad pass by Paul gave the Timberwolves a chance to tie it with 1.5 seconds left, Jimmy Butler’s shot was short.

The Timberwolves had a one-point lead with about seven minutes left when Houston used a 9-0 run, with the last seven points from Harden, to make it 94-86 with about four minutes to go. Harden, who also had a steal in that span, capped the run with a 3-pointer that prompted Minnesota coach Tom Thibodeau to call a timeout.

Jeff Teague ended Minnesota’s scoring drought with two free throws after the timeout and added a 3-point play after a basket by Harden. Harden made another shot to give him 11 straight points for Houston before another basket by Teague.

Harden got Capela in on the scoring after that, finding him for an alley-oop that pushed the lead to 101-93 with less than three minutes left.

The top-seeded Rockets had their hands full with the No. 8 Timberwolves on a night where Houston made just 10 of 37 three-pointers. Harden made 7 of 12 three-pointers, but Trevor Ariza, PJ Tucker, Eric Gordon and Paul combined to make just 3 of their 22 tries.

George set an Oklahoma City playoff record with eight three-pointers, blowing past the previous record of five. He made eight of 11 shots from long range, and 13 of 20 shots overall. It was his first playoff game with the Thunder since being acquired in a trade with the Indiana Pacers in the offseason.

Russell Westbrook had 29 points, 13 rebounds and eight assists and Carmelo Anthony added 15 points for the Thunder, who will host Game 2 on Wednesday.

Jazz rookie Donovan Mitchell had 27 points and 10 rebounds, but he left in the second half with left foot soreness. He returned in the fourth quarter but was noticeably hobbling.

Rudy Gobert scored 14 points, and Joe Ingles and Jae Crowder each added 13 for the Jazz.

The Thunder recovered from a 16-4 deficit to tie it at 25 at the end of the first quarter. Oklahoma City led 54-48 at halftime behind 20 points from George and 14 from Westbrook.

George hit his seventh 3-pointer to push Oklahoma City’s lead to 79-66. George hit a deep 2-pointer to close the quarter and give the Thunder an 81-72 lead.

Alex Abrines hit two 3-pointers early in the fourth quarter to give Oklahoma City a 92-80 lead and force Utah to call timeout. The Thunder held off a surge in the final minute.

Al Horford had 24 points and 12 rebounds and the Boston Celtics overcame Khris Middleton’s long three that beat the fourth-quarter buzzer, topping the Milwaukee Bucks 113-107 in overtime Sunday to open their playoff matchup.

The Celtics led 99-96 with 0.5 seconds left in regulation when Middleton took an inbounds pass on the far right wing and hit a contested 35-footer to force OT.

Giannis Antetokounmpo led the Bucks with 35 points, 13 rebounds and seven assists before fouling out in overtime. Middleton had 31 points, eight rebounds and six assists. Malcolm Brogdon scored all 16 of his points after halftime for Milwaukee.

Game 2 in the best-of-seven series is Tuesday night in Boston.

An acrobatic, spinning layup by Tatum gave Boston a 108-105 lead in overtime.

Antetokounmpo made one of two foul shots with 14.8 seconds left, but he fouled out of the game while going for the rebound on his miss.

The game went to extra time following a wild finish in regulation, that included back-to-back three-pointers in the closing seconds.

Milwaukee was held to just two field goals over the first seven minutes of the fourth quarter as the Celtics built an 86-76 advantage.

The Bucks closed to 89-87 before Marcus Morris made a falling down jumper just inside the arc to make it 91-87.

Antetokounmpo got free for a dunk, But Horford was steady again after being fouled, connecting on two more from the line with 15.2 seconds left.

Out of a timeout, Brogdon got free on the wing and drained a three with 10.3 to play to tie it at 96.

Rozier dribbled the clock down before crossing over Eric Bledsoe, stepping back and swishing an apparent game-winner with a half-second showing the clock.

But after a Milwaukee timeout advanced the ball to half court, Middleton matched it with his own three over Brown as time expired.