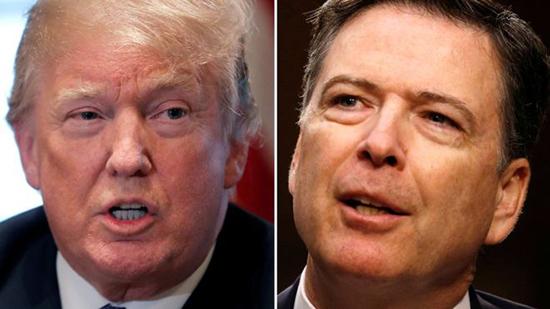 Former FBI director James Comey has said Donald Trump is a man “morally unfit to be president”, who treats women like “pieces of meat”.

Mr Comey was giving his first major television interview since he was was fired by President Trump last year.

He told ABC News that Mr Trump was someone “for whom the truth is not a high value”.

Hours before the interview aired, the president went on the offensive, accusing Mr Comey of “many lies”.

“I don’t buy this stuff about him being mentally incompetent or early stages of dementia,” Mr Comey told ABC’s 20/20 programme on Sunday night.

“Our president must embody respect and adhere to the values that are at the core of this country. The most important being truth. This president is not able to do that,” Mr Comey said.

It is the latest development in a long-standing feud between the two men, further fuelled by the upcoming publication of Mr Comey’s memoir A Higher Loyalty: Truth, Lies and Leadership.

The ex-FBI chief is on a publicity blitz for the book.

In the primetime TV interview, Mr Comey suggested that the president had surrounded himself with people loyal to him – comparing Mr Trump to mob bosses he had investigated as a younger man.

“The loyalty oaths, the boss as the dominant centre of everything, it’s all about how do you serve the boss, what’s in the boss’ interests,” he said.

Asked if those around the president were “enabling bad behaviour”, Mr Comey said: “The challenge of this president is that he will stain everyone around him.”

Mr Comey, however, said he did not believe President Trump should be impeached.

“I hope not because I think impeaching and removing Donald Trump from office would let the American people off the hook,” he said.

Instead, he said, it was something the American people were “duty bound to do directly” at the voting booth.