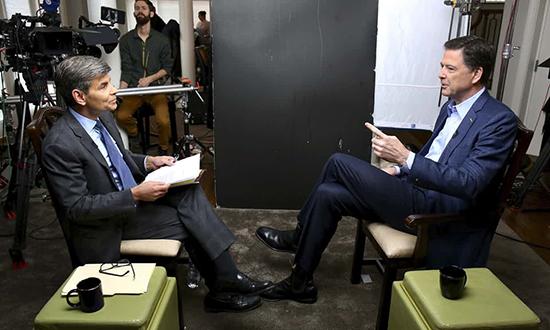 James Comey’s book is called A Higher Loyalty. But judging from his blockbuster interview with ABC News, it should have been called The Art of the Possible. If only as the logical sequel to The Art of the Deal.

Did Donald Trump consort with a golden shower of prostitutes in a Moscow hotel? “I don’t know whether the current president of the United States was with prostitutes peeing on each other in Moscow in 2013. It’s possible, but I don’t know.”

Do the Russians have something on Donald Trump, asked George Stephanopoulos?

“I think it’s possible. I don’t know,” Comey said. “These are more words I never thought I’d utter about a president of the United States, but it’s possible.”

Should he have denied Trump’s request to drop his investigation into his first national security adviser, Michael Flynn?

“It’s possible that in the moment, I should – you know, another person would have said, ‘Sir, you can’t ask me that. That’s a criminal investigation. That could be obstruction of justice.’”

Should he have waited for his FBI agents to look at Anthony Weiner’s emails before blowing up the election on its final weekend, not once but twice? “Well maybe,” he conceded. “And maybe another director might have done that.”

How about that Trump demand for loyalty at a private dinner between the two of them in the White House? Was it a mistake to agree to give Trump “honest loyalty” instead?

Possibly, maybe. Comey just can’t help having it both ways: Trump is possibly a lying mafia boss who might possibly destroy the United States as Comey knows and loves it. But Comey couldn’t possibly have tipped the election to such a man because his actions possibly made no difference.

This kind of hedging gets confusing when you’re warning about existential dangers to democracy.

Except on one point, where Comey is unusually clear. Is Donald Trump unfit to be president?

Moral clarity may be Comey’s strength but he is in fact a slimeball. He is also not smart, and the worst FBI director in history. By far.

We know all these things because the president of the United States helpfully told us them a few hours before Comey’s interview was broadcast on Sunday.

In the interests of completeness, you should know that it is the president’s considered opinion that Comey is a nobody (“I hardly even knew this guy”) and a writer of FAKE memos.

These presidential statements are not at all fake. You see, Comey is actually part of a conspiracy whose breathtaking complexity and power will surely blow your mind. To wit: in a particularly convoluted corner of the president’s brain, Comey intervened in the final days of the 2016 election on behalf of Hillary Clinton – not against her – because he wanted a job from her.

The fact that Comey’s email declarations helped Clinton lose the election, and the fact that Trump himself employed Comey, is neither here nor there. Talk about a slimeball!

Unbelievably, James Comey states that Polls, where Crooked Hillary was leading, were a factor in the handling (stupidly) of the Clinton Email probe. In other words, he was making decisions based on the fact that he thought she was going to win, and he wanted a job. Slimeball!

How can we tell what Trump really thinks about Comey, beyond his verbal evacuations on the Tweet machine? We can cross-check them against what he told his Russian besties just after firing the worst FBI director in history.

“I just fired the head of the FBI. He was crazy, a real nut job,” he told them, according to the White House notes of the meeting. “I faced great pressure because of Russia. That’s taken off.”

And they say honesty is such a lonely word. In Trump’s case, it just needs a little Russian company.

For his part, Comey thinks of himself as the whistleblower-in-chief, calling attention to the high crimes and misdemeanors of the commander-in-chief.

Like all the great whistleblowers, Comey is a deeply flawed human being with more than a little Messiah complex. It was this same delusion about saving the world that led him to break with the FBI and justice department’s longstanding policies not to mess with a presidential election.

Comey believed his boss, the then-attorney general Loretta Lynch wasn’t independent. He talks about this mysteriously in his book and in his ABC interview, citing classified information. According to the New York Times, his opinion was shaped in large part by a Democratic operative’s account, which was hacked by the Russians, of all people.

Knowing all this super-secret stuff, and being so above reproach, Comey felt it was his duty to protect the sanctity of the election by blabbing his mouth to the media just before the election itself. As he likes to say now, he doesn’t know if his public disclosures affected the election, but he really thought they wouldn’t because the polls were so clear.

What he really means is that he thought Clinton could survive the hit: a political calculation he wasn’t qualified to make, nor authorized to act upon in public.

This is a man who thinks Lynch was trying to have it both ways by calling the email investigation “a matter” rather than “an investigation.”

When he told senators he felt “mildly nauseous” that he might have impacted the election, Donald Trump was so pissed that he moved ahead with firing him. The rest of us just continued to feel severely nauseous.

But having helped deliver the Trump presidency, Comey is now going out of his way to deliver the Trump impeachment proceedings. And that is clearly leaving his ex-boss feeling more than a little nauseous during most of his non-golfing hours.

Comey recalls in some detail Trump’s response when he briefed the president-elect on the Steele dossier, complete with its urine-soaked account of Russian kompromat: “He interrupted very defensively and started talking about it, you know, ‘Do I look like a guy who needs hookers?’”

Possibly maybe. More importantly, he now looks like a guy who needs an impeachment lawyer.