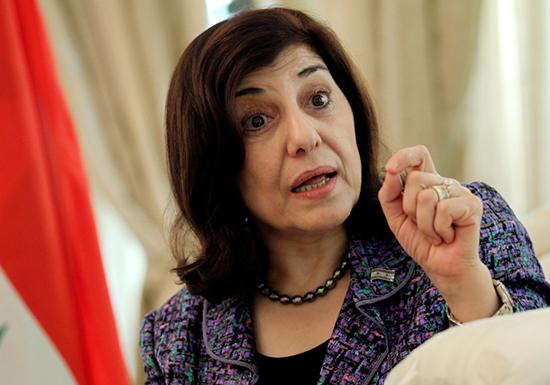 “There are two things that the West and the Zionists want. One is that there be no unity in the [Arab] nation. The other is that [the Arab nation] not arm itself with science and knowledge.”

Syrian air defenses scored a resounding victory over the US, Britain and France – and this triumph marks the beginning of the end of the American empire.

That, at least, is the version of President Bashar Assad’s political adviser on Saturday’s air strikes launched by the three Western powers in retaliation for suspected Syrian use of chemical weapons. Bouthaina Shaaban disseminated her claims in an article published on the Lebanese pro-Hezbollah al-Mayadeen website.

Meanwhile, a Syrian physician who supports the rebels said in a WhatsApp interview that the US-led action would only serve to strengthen Assad’s position.

Shaaban wrote that “the most important fact we should record here for Trump is that his missiles are not smart, not accurate – and that the Syrian air defenses have given the evidence that they are more smart and accurate than his missiles. He should be careful about his tweets.”

Shaaban maintained that the air strike had sent cowering Israelis scrambling into air raid shelters. “Instead of the Syrian people going to shelters, they went to the rooftops to watch Syrian forces shoot down scores of Trump’s missiles before they could reach their goals. This, while the settlers of the Zionist entity fled to their shelters.”

Shaaban took issue with US Secretary of Defense Jim Mattis’s announcement that installations linked to the production of chemical weapons had been struck. “The center of science and research which provides knowledge to the best Syrian students every year was targeted,” she wrote. “Trump is destroying this institution, which has no connection to producing any weapons. This is the lie of war about chemical weapons that Trump created.”

“There are two things that the West and the Zionists want,” Shaaban continued. “One is that there be no unity in the [Arab] nation. The other is that [the Arab nation] not arm itself with science and knowledge, the highest value for humans.

US, British and French forces pound Syria with air strikes early on Saturday in response to a poison gas attack, April 14, 2018(Reuters)

“The real response to their aggression, occupation and attempts to liquidate the Palestinian cause and to humiliate the Arabs and pan-Arabism is to have more science and knowledge, and to develop our capabilities and air defense and laboratories, and to produce anything that secures the needs of our generation.”

Referring to the US, France and Britain, Shaaban concluded that “the breaking of their evil aggression is the beginning of the vanishing of their empire, which will be replaced by new forces which respects the humanity, sovereignty and safety of peoples. As the sun rises from the east, the sun of the just and free world will rise from here [Damascus].”

Meanwhile, the physician who backs the rebels and used to live in Ghouta province took issue with the air raids, but for a markedly different reason: that they were too weak. “This strike is only to save face,” the physician wrote. “Its goal is not humanitarian. The strike that doesn’t break your back makes you stronger. It will strengthen Assad.”

“They waited five days, which gave Assad a chance to empty his headquarters of weapons and people,” he wrote.

Of the gatherings to support Assad after the strikes, he wrote: “The dictator organizes these marches and it is not strange – they can do it in five minutes.”

Social media comment among pro-regime Syrians focused on the complicity or lack of response in the Arab world. “Where are the Arabs?” asked Facebook user Jaber Ashamra.

“The Arabs are sons of bitches,” wrote Gaby Iskevrian, who accompanied his post with a Syrian flag and the words “God Bless Syria.” Ilham Jabour wrote: “The Arabs have funded this aggression with their oil. We paid with our blood. Therefore, we shouldn’t call ourselves Arabs. We are a distinguished people, different from the rest of the Arabs.”

A Palestinian user, Iyad Rajoub from Hebron, commented: “The issue is not if you support Bashar, [Saudi Crown Prince] Mohammed Bin Salman or Trump. The issue is we live in the world of bastards, and all of them have no just cause. Let us care about our families. F*** them all.”

Ibrahim, from Morocco, posted: “I wonder why the Russians did not respond to this aggression. How would America respond if the Russians bombarded Saudi Arabia?”