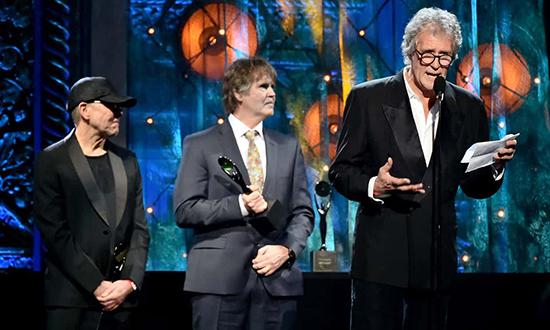 British rockers Dire Straits have been inducted into the rock’n’roll hall of fame, but the occasion was marked without its lead singer and guitarist Mark Knopfler, who chose not to turn up to the ceremony.

Knopfler skipped the concert in Cleveland, US, on Saturday, and it was left to bassist John Illsley to explain his absence.

“I’ll assure you it’s a personal thing,” Illsley said onstage. “Let’s just leave it at that.”

In an earlier interview with Billboard, Illsey said of Knopfler: “He just didn’t feel like coming, it’s as simple as that. It just didn’t appeal to him, and I appealed to him on several occasions.”

On Saturday, Illsley acknowledged the awkwardness of Knopfler not being present and then took a subtle swipe at his close friend by saying, “it’s more than one person, a collective”. The band did not perform after speaking.

Illsley did compliment Knopfler for writing music that made the band – who had a string of hits in 1970s and 80s, including Sultans Of Swing and Money For Nothing – “stand out from the crowd”.

Former Bon Jovi members Richie Sambora and Alec John Such joined current members, including Jon Bon Jovi, onstage to mark the band’s induction into the prestigious club. They performed crowd favourites Livin’ on a Prayer, You Give Love a Bad Name and It’s My Life.

The 33rd annual Rock Hall ceremony kicked off with a tribute to Tom Petty, who died in October at age 66. The late jazz legend Nina Simone was inducted with performances from Lauryn Hill and Andra Day.