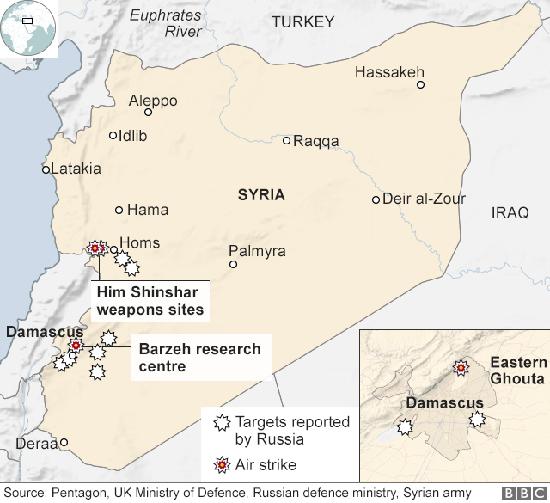 French President Emmanuel Macron has said he convinced US President Donald Trump not to withdraw troops from Syria and instead commit “for the long term”.

Earlier this month, Mr Trump declared that the US would “be coming out of Syria very soon”.

On Saturday, joint US, UK and French strikes targeted Syrian government sites in response to an alleged chemical weapons attack.

The pair, who are reported to have a friendly relationship, spoke multiple times in the days before the military action was taken.

After Mr Macron’s comments, White House spokeswoman Sarah Sanders said: “The US mission has not changed – the president has been clear that he wants US forces to come home as quickly as possible”.

But she added that the US was “determined to completely crush” the Islamic State group and prevent its return.

Announcing the strikes in an address to the nation on Friday evening in Washington, Mr Trump insisted: “America does not seek an indefinite presence in Syria – under no circumstances.”

The US has about 2,000 personnel on the ground in eastern Syria supporting an alliance of Kurdish and Arab militias called the Syrian Democratic Forces (SDF).

What did Mr Macron say?

Speaking in a live TV interview, during which he was grilled on several subjects, Mr Macron said: “Ten days ago, President Trump was saying ‘the United States should withdraw from Syria’. We convinced him it was necessary to stay for the long term.”

In telephone calls with Mr Trump, he also said he “persuaded him that we needed to limit the strikes to chemical weapons [sites], after things got a little carried away over tweets”.

A tweet from Mr Trump last week about US missile strikes on Syria had read: “Get ready, Russia, because they will be coming, nice and new and ‘smart’. You shouldn’t be partners with a Gas Killing Animal who kills his people and enjoys it!”

The French president appears to have struck up a strong relationship with his US counterpart and this month will be afforded the first formal White House state visit of the Trump presidency.

Mr Macron insisted the Western allies had “complete international legitimacy to act” in Syria. He said the allies had clear proof there had been a chemical attack in the town of Douma near Damascus on 7 April and that the Syrian government was responsible. Syria vehemently denies this.

“They have not used chlorine themselves but they have methodically built the international community’s inability to act through diplomatic channels to stop the use of chemical weapons,” he said.

He said the military strikes early on Saturday had been “perfectly carried out” but were not a declaration of war on Syria.

The wave of strikes had represented the most significant attack against President Bashar al-Assad’s government by Western powers in seven years of Syria’s civil war.

Mr Macron said he still wanted dialogue with all parties, including Russia, to try to find a political solution and would go ahead with a planned trip to Moscow next month.

His marathon interview on French broadcaster BFMTV lasted nearly three hours – and #MacronBFMTV was a top trend on Twitter late on Sunday evening.

What’s happening on the ground in Syria?

Inspectors from the independent Organisation for the Prohibition of Chemical Weapons (OPCW) are now in Damascus.

The inspectors will investigate the site of the alleged chemical attack in Douma, which the Western allies believe killed dozens of people with the use of chlorine gas and possibly Sarin.

The inspectors had been expected to travel to Douma over the weekend but there is no news they have arrived there yet.

The Russians say there is no trace of any chemicals and questioned why the allies carried out strikes before the inspectors had reported.

Russia says the attack in Douma was staged, accusing the UK of orchestrating it.

The OPCW will not seek to establish – and publicly announce – who was responsible for the attack.

What are the latest diplomatic moves?

Speaking on TV, US envoy to the UN Nikki Haley said new sanctions would be announced on Monday against Russian companies with links to President Assad.

This would be the second tranche of sanctions against Russian firms in a month, partly related to Russia’s support for Syria.

British Foreign Secretary Boris Johnson said no further strikes were planned, but that this would be reassessed if more chemical attacks took place.

President Putin spoke to Iranian counterpart Hassan Rouhani by phone on Sunday, telling him that any new Western strikes on Syria would spark “international chaos”.

What was targeted by the US, UK and France?

Three sites. Firstly, the Barzeh complex, which the US says is a centre for development, production and testing of chemical and biological weapons, although Syria denies this.

The other two were suspected chemical weapons facilities at Him Shinshar near Homs.

The US said 105 missiles were launched and it believed none were intercepted by Syrian defences. It said Syria’s chemical weapons programme had been set back years.

The Russians said 71 missiles were shot down by Syrian systems.