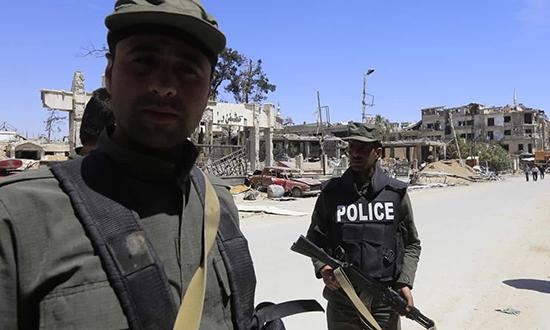 Russia and the Syrian regime have been accused by western diplomats of denying chemical weapons inspectors access to sites in the town of Douma, where an attack killed dozens and prompted US-led missile strikes over the weekend.

Russia and Syria had cited “pending security issues” before inspectors could deploy to the town outside Damascus, said Ahmet Üzümcü, the director-general of the Organisation for the Prohibition of Chemical Weapons, at a meeting of the OPCW’s executive council.

Syrian authorities were offering 22 people to interview as witnesses instead, he said, adding that he hoped “all necessary arrangements will be made … to allow the team to deploy to Douma as soon as possible”.

Speaking in parliament on Monday, Theresa May accused Syria and Russia of blocking access and attempting to cover up the attack. “The Syrian regime has reportedly been attempting to conceal the evidence by searching evacuees from Douma to ensure samples are not being smuggled from this area, and a wider operation to conceal the facts of the attack is under way, supported by the Russians,” the prime minister said.

The Russian deputy envoy at the UN, Dmitry Polyanskiy, said the obstacles were caused by the western bombing. “If you go to a site which was just bombed I imagine you might have certain logistic problems,” he said.

Theresa May on Syria airstrikes: ‘We have not done this because Trump asked us to’ – Politics live

Earlier, Russia’s deputy foreign minister, Sergei Ryabkov, said the inspectors could not access the site because they did not have the appropriate United Nations permission. In response the UN said it had provided the necessary clearances for a fact-finding mission.

Russian military officials were at the site of the Douma attack days before the OPCW reached Damascus. “It is our concern that they may have tampered with it,” Kenneth Ward, the US ambassador to the OPCW, told the council meeting.

In an interview with the BBC the Russian foreign minister, Sergei Lavrov, said he could “guarantee that Russia has not tampered with the site” and reiterated the Russian line that any attack on Douma was “staged”.

The US launched military strikes, alongside UK and French forces, in the early hours of Saturday morning local time aimed at reducing the Syrian regime’s chemical weapons facilities.

What you need to know about the Syria strikes – video report

Over the weekend the OPCW sent inspectors on a fact-finding visit to Douma to search for evidence and interview witnesses. Their arrival coincided with a Syrian military announcement that it had “purified” the region of eastern Ghouta, of which Douma is a part, after a two-month campaign that has killed nearly 2,000 civilians, following years of siege.

Western countries are making a push both at the OPCW in The Hague and the UN in the New York to secure wider diplomatic support for a clampdown on the use of chemical weapons in the Syria. The suspicion is that the Syrian government previously misled inspectors when it declared its entire chemical weapons stockpile had been disclosed and destroyed.

The UN security council’s 15 members will meet on Monday to discuss a call for a wider push to eliminate the covert Syrian government stockpiles.

The White House said there had been no decision on imposing sanctions on Russian entities suspected to have given support and equipment to the Syrian chemical weapons programme, contradicting remarks on Sunday by the US envoy to the UN, Nikki Haley. Haley had said in a television interview that sanctions would be “coming down” on Monday. But the White House spokeswoman, Sarah Sanders, said: “We are considering additional sanctions on Russia and a decision will be made in the near future.”

EU foreign ministers meeting in Luxembourg threatened new sanctions against Syria, but offered little support among member states for fresh US measures against Russia. A joint statement from the 28 also fell short of wholehearted support for the US-led strikes.

Syria joined the OPCW in 2013 after a sarin gas attack that killed hundreds of people in Ghouta. The move was part of a joint Russian-US deal that averted military action threatened by the then US president, Barack Obama.

The OPCW needs a two-thirds majority to take decisions, and faces the threat of being fatally weakened as Russia and the west fight over the OPCW’s mandate to ascribe responsibility for attacks.

A Russian veto at the UN last November means the OPCW is empowered only to state if chemical weapons have been used, and not to attribute responsibility.

Russia is also challenging an OPCW finding that a nerve agent was found in an attack in Salisbury on the Russian double agent Sergei Skripal.

A joint United Nations-OPCW mission concluded the Syrian air force was responsible for a sarin attack that killed nearly 100 people a year ago in the town of Khan Sheikhoun. The finding led Russia to object to the way in which the joint mission reached its conclusions, and to demand changes in its methodology before its mandate could be renewed.

The British envoy to the OPCW, Peter Wilson, told the executive meeting: “The time has come for all members of this executive council to take a stand. Too many duck the responsibility that comes with being a member of this council. Failure to act to hold perpetrators to account will only risk further barbaric use of chemical weapons, in Syria and beyond.”