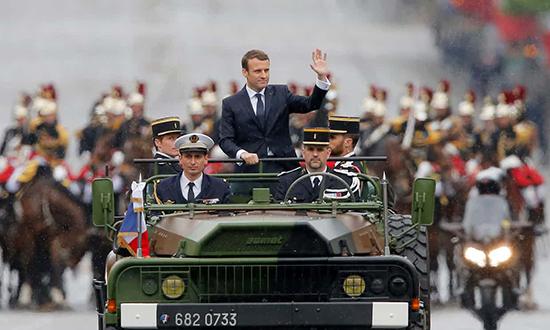 As French fighter jets sped towards Syria in the early hours of Saturday morning, the French president, Emmanuel Macron, sat in a windowless command-room beneath the Élysée Palace. Surrounded by senior military and diplomatic staff tracking the military operation, the 40-year-old French leader was “calm and resolved”, an Elysée source said.

Macron’s decision to order French missile strikes against Syria with the US and UK marks a new phase in his presidency. It is the first time that France’s youngest modern president, who has been in power for a year, has used his constitutional role as commander-in-chief of the army to order a military strike.

From his election last May, Macron had always been keen to showcase France’s military might. He broke with tradition by standing in an open-topped camouflaged military jeep for his long inauguration drive up the Champs-Élysées. Despite being the first modern French president who has neither served in the army nor carried out mandatory military service, he has donned air force uniform and been photographed being winched by helicopter onto a nuclear submarine.

Although Macron chose to continue the previous French administration’s military interventions abroad – important operations against jihadists in west Africa and Islamic State in Syria and Iraq – he had not launched his own military action. The French air force has been active in Syria since 2015 to fight Isis, but until this weekend it had never targeted government assets.

At the Élysée Palace, even before French jets were back on home soil, officials were keen to stress that Macron, with the full force of France’s vast foreign diplomacy network, was moving on to “the next phase”. Macron was seeking to use the momentum of the strikes to keep pushing for a ceasefire and a “political process” in Syria, officials explained. For the centrist president, foreign policy means pushing France to the forefront of a complex and fracturing world stage, attempting to talk to everyone – with a particular focus on those who might not want to hear what he has to say.

Under Macron, French diplomacy is seen as seeking to fill the gaps left by a more distant Trump and a British prime minister preoccupied with Brexit. Macron was the only leader of the trio to hold what a French official called a frank phone conversation with the Russian president, Vladimir Putin, before the strikes, and a firm conversation with the Turkish leader, Recep Tayyip Erdoğan, afterwards. France’s former foreign minister, Hubert Védrine, argued that the strikes had strengthened French diplomacy, showing that Paris was credible.

Macron had put his political credibility at stake the moment he promised last year that proven chemical weapons use in Syria was his personal red line. He told me last summer: “When you fix red lines, if you don’t know how to make sure they are respected, you’re choosing to be weak. That’s not my choice.”

François Miquet-Marty, head of Viavoice pollsters, said: “With the personal political identity that Macron seeks to promote, it would have been difficult for him not to intervene. He styles himself as a man of action, able to take strong action where his predecessors weren’t.”

In 2013, the former socialist president François Hollande had wanted to strike Syria over chemical weapons use but was unable to act alone after the US under Barack Obama did not intervene.

France, the former colonial power in Syria, sought to explain to public opinion that it struck the chemical weapons production and storage site as part of a duty to defend international law. Around 100 years after France suffered chemical attacks on its soil during the first world war, Paris said it had acted to prevent further killing.

But Syria remains a vast challenge for Macron during a difficult period at home.

Macron is facing months of train strikes over sweeping changes to the national rail system, as well as student sit-ins over a new university admissions process. He insists he will stand firm. But although his approval ratings have remained more or less stable at around 40%, his support among poorer and working-class voters has plunged, creating an impression of a country split between the haves and have-nots.

Foreign policy, however, has always been Macron’s strength in the opinion polls. Up until now polls have showed two-thirds of the French electorate approve of his actions on the world stage, “even among those with modest incomes”, Miquet-Marty said.

Macron did not need parliament’s backing to strike Syria, although he must inform the national assembly in the coming days and a debate will be held without a vote. Already, some political opposition to Macron has been critical. On the hard left, Jean-Luc Mélenchon called the strikes a “north American revenge attack and irresponsible escalation” that France should not have been part of. The far-right leader Marine Le Pen said France had missed a chance to show it was “an independent power” on the international stage.

Jérôme Fourquet, a political scientist from Ifop pollsters, said: “The political reactions reflect the sense that there isn’t a consensus on one side or the other. It’s a complex topic and the situation is very confused on the ground. To complicate matters, France still has a terrorist threat that is very present, and influences public opinion.”