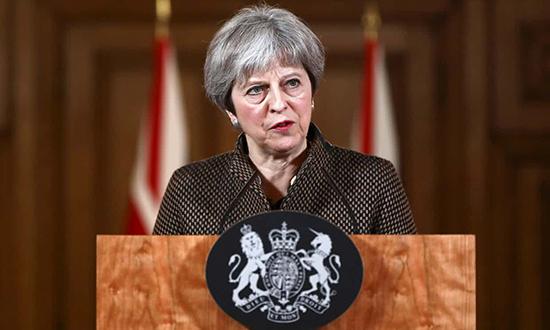 Theresa May will hit back at critics of military action in Syria by insisting the decision to launch airstrikes was aimed at preventing human suffering, and was in Britain’s national interest, as she is questioned by MPs about the attacks for the first time.

With the government braced for highly charged exchanges in the Commons as MPs return from their Easter recess, the prime minister will emphasise the international support for the bombing raids.

She is expected to add: “We have done it because we believed it was the right thing to do. And we are not alone. There is broad-based international support for the action we have taken,”pointing out that she has secured the support of a string of world leaders.

May will give a statement to MPs on Monday afternoon, after refusing to recall parliament last week to seek MPs’ approval before action was taken.

Her remarks will come after Jeremy Corbyn described the attack on Syria as “both wrong and misconceived”.

In an article for the Guardian, the Labour leader said the attack by the west was “either purely symbolic – a demolition of empty buildings, already shown to be entirely ineffective as a deterrent. Or it was the precursor to wider military action. That would risk a reckless escalation of the war and death toll, and the danger of direct confrontation between the US and Russia. Neither possibility offers an end to the war and suffering, or any prospect of saving lives – rather the opposite.”

He also took aim at the foreign secretary, saying: “Boris Johnson’s blithe acceptance that the conflict will now continue on its current course and that peace negotiations would be an ‘extra’ is an unconscionable abdication of responsibility and morality.”

In further remarks that could prove controversial after the Salisbury poisoning, Corbyn also called for “a shift from the rhetoric of endless confrontation with Russia”, which he said could “help lower the temperature, and make a UN consensus for multilateral action to end Syria’s agony more likely”.

The government has also announced that it will urge the Speaker, John Bercow, to grant an emergency debate afterwards, to allow more time to be set aside for MPs to express their views.

The debate would be aimed at preempting attempts by Labour and the Scottish National party to force a vote on the decision to trigger action – though Conservative MPs have been issued a three-line whip on Tuesday in case opposition parties succeed.

Vince Cable, the Liberal Democrat leader, accused the prime minister of failing to consult parliament because she feared losing a vote. “Theresa May had a chance to try and persuade parliament but bottled out of it through weakness,” he said.

May will pledge a further diplomatic push to bring the Assad regime back to the negotiating table in Geneva, and ensure chemical weapons attacks are fully investigated.

Senior government ministers were out in force over weekend, seeking to explain the rationale behind the bombing raids, with Johnson insisting they were “timely, appropriate and commensurate”.

He said the airstrikes were aimed narrowly at sending a signal to the Syrian regime that the use of chemical weapons was unacceptable – not on seeking to resolve the wider conflict.

“There’s one overwhelming reason why this was the right thing to do, and that is to deter the use of chemical weapons, not just by the Assad regime but around the world,” he said, describing the action as a response not only to the Douma attack but repeated use of chemical weapons in Syria in the past few years. “Finally the world has said, enough is enough,” he told BBC1’s the Andrew Marr Show.

He added: “It’s important that we understand the limits of what we are trying to do. This is not going to turn the tide of the conflict in Syria; one can hope it encourages the Russians to the negotiating table in Geneva, to get a political process properly going – but that is, as it were, an extra. The primary purpose is to say no to the use of barbaric chemical weapons.”

Johnson also stoked fears of reprisals by Russia, saying the UK had to “take every possible precaution” to prepare for possible revenge cyber attacks on targets such as the NHS and electrical facilities.

May is expected to face questions from Tory MPs anxious about the potential consequences of Saturday’s raids, the government’s plan for tackling the broader Syrian conflict and the decision to ignore the recent convention of seeking parliament’s approval before military action.

Labour backbenchers with a longstanding interest in the Syria conflict, including the Wirral South MP Alison McGovern, are also likely to pursue the question of what more the UK could and should be doing to ensure the safety of civilians.