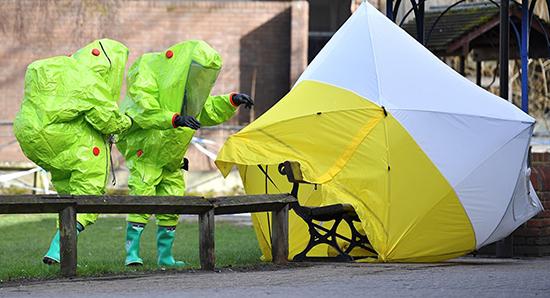 With Britain failing to provide any tangible evidence of Russia’s involvement in the Skripal poisoning case, many people are beginning to wonder whether London’s accusations really hold any water.

The symptoms of Sergei and Yulia Skripals in Salisbury could be indicative of the use of the BZ-type non-lethal nerve gas previously used by NATO and which is effective on humans for a maximum period of three days,” Russian senator and foreign intelligence veteran Igori Morozov told Sputnik.

“This is a non-lethal nerve gas of the third generation, which remains active from six hours to three days,” Morozov said, adding that the fog that shrouded Salisbury on the day of the alleged attack could have added strength to the agent, just like any precipitation would.

Igor Morozov said that he had studied the BZ-gas when he was still a military cadet back in the 1970s.

“We studied it as a chemical weapon in the arsenal of our main adversary,” Morozov said.

“It looks like some of this gas may still be found in US and British chemical storerooms,” he added.

Morozov has wondered why an earlier report filed by a Swiss lab about the possible use of such a military chemical in the Skripals’ case was not mentioned by the full OPCW report.

On Saturday, Russia’s Foreign Minister Sergei Lavrov said that a Swiss laboratory detected traces of BZ, which has been used by the US and UK armies, in samples sent by the OPCW experts investigating the poisoning of Skripal.

When asked about a new information on Swiss experts’ findings related to the Salisbury incident, a press officer of the Russian Embassy in London said that “according to the Swiss Federal Institute for NBC-protection in Spiez, its experts discovered traces of toxic chemical called ‘BZ’ and its precursors.

“It is a Schedule 2 substance under the Chemical Weapons Convention,” the officer said.

On March 4, former Russian intelligence officer Sergei Skripal and his daughter Yulia were found slumped unconscious on a bench outside a shopping center in Salisbury, England.

London was quick to point a finger at Russia, accusing Moscow of poisoning the Skripals with what British experts claimed was the military-grade nerve agent A234.

Moscow has strongly denied any role in the Skripals’ poisoning, pointing to the complete absence of evidence linking it to the March 4 attack.