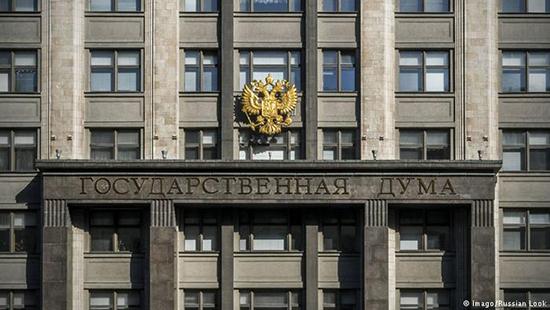 Rare earth metals, medication and software: Russia’s strongest response yet to United States sanctions is taking shape. Now, Washington and its Western allies are in the crosshairs.

The cult 1985 song, “Goodbye, America,” by the Soviet rock band, Nautilus Pompilius, was a melancholic tune from the pro-Western Perestroika generation that cast off American mythology: “Your worn jeans have become too small for me. We’ve been taught for so long to love your forbidden fruit.”

These lyrics could describe the draft legislation that has come before an emergency meeting of Russia’s upper house of parliament. In a show of solidarity, the draft was introduced last week by Duma Chairman Vyacheslav Volodin along with the heads of the parliament’s four factions.

It serves as Russia’s answer to US sanctions from April 6, which are the most severe since the annexation of Crimea in 2014. Targeting top Russian companies and public officials, the sanctions take aim at Russia’s stock and currency exchanges for what the US calls Russia’s “malicious activities” around the world, including in Ukraine and Syria.

Russia’s reaction forms a legal basis for tit-for-tat sanctions, stemming from the US Congress’s passing of CAATSA (Countering Americas’s Adversaries Through Sanctions Act) in the summer of 2017. US-Russia trade is not particularly large: $24 billion (€19 billion) in 2017, according to Russian state news agency RIA, with $17 billion of Russian goods and services sold to the US and $7 billion sold to Russia. That makes it difficult for Russia to hurt the US with sanctions.

The draft legislation proposes restrictions on US agricultural, food, alcohol, tobacco and medical imports. Medication for which there is no Russian replacement would be exempt. A Russian parliamentarian caused a stir when he suggested on a talk show that Russians try tree bark or shrubbery as an alternative to US-produced medicine. It was meant to be a joke, he said.

Boeing and Microsoft likely to be impacted

The sanctions bill also threatens to end US-Russian cooperation in the fields of atomic energy, aircraft production and rocket systems. That could affect Boeing, which imports titanium from Russia. An end to sales of rare earth metals could cause trouble for private US space companies, such as United Launch Alliance (ULA), a joint venture between Boeing and Lockheed Martin. ULA’s Atlas V rocket uses the Russian RD-180 engine. The US Congress has already that requested the country’s aerospace sector stop buying Russian-made engines following the Crimea annexation, but lacking alternatives, sales continued.

Russian lawmakers also want to limit the use of US software in government agencies, such as Microsoft products installed on many Russian computers.

Read more: Why Syria is not the Cuban missile crisis of 2018

The draft legislation could make travel to, and business in, Russia more difficult for US citizens. US airlines may encounter additional fees for use of Russian airports, for example.

The bill is scheduled for its first reading on May 15 and there is a push to get it passed by the Duma and signed by President Vladimir Putin quickly so it can come into force as soon as possible. Putin will be inaugurated again and his new government formed early next month, after which the law could be implemented. Based on the initial draft, it’s not just the US that is being targted — its allies that are part of or that support the sanctions against Russia may also be affected.