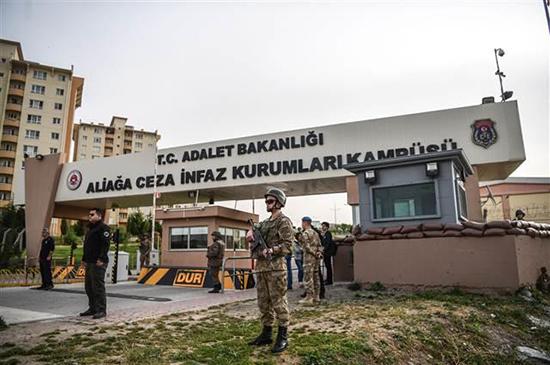 An American pastor denied allegations of links to a group accused of orchestrating a failed military coup in Turkey during his trial on April 16 in a case that has compounded strains in the United States’ relations with Turkey.

Andrew Brunson, a Christian pastor from North Carolina who has lived in Turkey for more than two decades, was indicted on charges of helping the Fethullahist Terrorist Organization (FETÖ), who is widely believed to have orchestrated the failed coup attempt that left more than 250 people killed.

“I have never done anything against Turkey. I love Turkey. I have been praying for Turkey for 25 years. I want the truth to come out,” Brunson told the court in the Aliağa town of the Aegean province of İzmir.

Brunson has been the pastor of the İzmir Resurrection Church, serving a small Protestant congregation in Turkey’s third largest city.

“I do not accept the charges mentioned in the indictment. I have never been involved in any illegal activities,” said Brunson, wearing a white shirt and black suit, giving his defense in Turkish. Brunson’s wife, North Carolina Senator Thom Tillis, and the U.S. envoy for religious freedom, Sam Brownback, were present in the courtroom.

Brunson’s trial is one of several legal cases roiling U.S.-Turkey relations. The two countries are also at odds over U.S. support for the Syrian Democratic Forces (SDF) and the Syrian Kurdish People’s Protection Units (YPG) in northern Syria, which Turkey considers terrorist organizations.

Meanwhile, the relationship between the United States and Turkey is likely to come under pressure as long as the U.S. pastor remains in jail, a U.S. official responsible for international religious freedom said on April 16.

“The United States cares deeply about our relationship with Turkey,” Sam Brownback, the U.S. ambassador-at-large for international religious freedom, told reporters during a recess at the trial.

“That relationship is going to have difficulty moving forward as long as Andrew Brunson is incarcerated,” he added.

Brunson’s lawyer said the pastor, detained 18 months ago, was in custody because of his religious beliefs. Turkey is a majority Muslim country though constitutionally secular.

“There is evidence that shows Brunson was detained due to his faith,” İsmail Cem Halavurt said on the eve of the trial. Halavurt said Brunson’s religious role had been “classified as aiding terror organizations.”

A copy of Brunson’s indictment accuses him of working both with Gülen’s network and the outlawed Kurdistan Workers’ Party (PKK).

Brunson also denied aiding any PKK suspects and dismissed suggestions he had preached in favor of Kurdish independence as “lies.”

On April 15, Halavurt said he believed Brunson would ultimately be acquitted and there was no reason for his continued detention during trial. “Our prior expectation from the hearing is ending the arrest,” he said. “We want Brunson to be freed immediately,” said Halavurt.