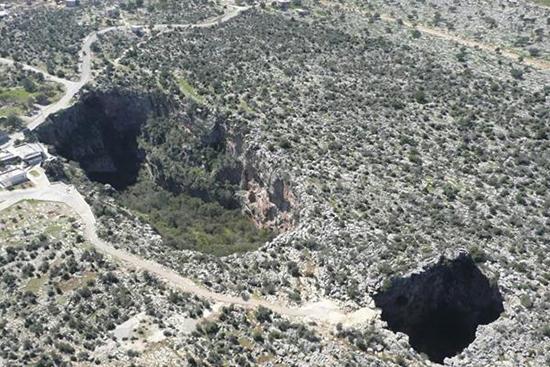 A new project will provide tourists ease of access to the two large sinkholes in the Taurus Mountains, known as the Cennet and Cehennem (Heaven and Hell) caves in Turkey’s southern province of Mersin, Development Minister Lütfi Elvan has announced.

The plans for the project entail the construction of an elevator in the Cennet sinkhole and a glass observation deck in the Cehennem sinkhole, state-run Anadolu Agency reported on April 15.

Elvan said they aim to attract more visitors to the sinkholes, which act as an open-air museum with their cultural wealth.

“Cennet and Cehennem already attract many visitors. However, they have many deficiencies. For instance, it is difficult to go up and down to the sinkholes. This is why we have developed a new project to enrich it and make it an attractive site,” Elvan said.

The expected cost for the project is 10 million Turkish liras (nearly $2.5 million).

The new elevator and the observation deck will allow tourists to examine the area more closely, Elvan said.

The sinkholes are one of the main touristic attractions in the city.

Currently, the 75-meter deep Cennet sinkhole can be reached by a staircase that consists of 452 steps.

Cehennem is a 130-meter deep sinkhole next to Cennet and the upper edge of its opening is concave, which makes it impossible to reach the bottom.

Meanwhile, the project also includes the renovation of the Virgin Mary Monastery and a Temple of Zeus from the Hellenistic era, both located in the Cennet sinkhole.