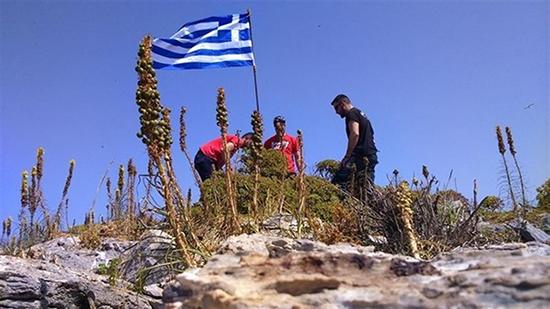 Turkish Prime Minister Binali Yıldırım has urged the Greek government to refrain from “provocative moves” in the disputed areas of the Aegean Sea after the Turkish coast guard removed a Greek flag planted on an islet near the district of Didim, southwestern Turkey on April 15.

“There was an attempt to plant a Greek flag on an uninhabited rocky islet across from [the Turkish resort of] Didim. Our coast guard teams did what was necessary and removed the flag,” he told reporters in Istanbul on April 16.

“Our advice to Greece is to stay within the boundaries of good neighborly relations and to avoid provocations that would escalate tension. No one should think that we would give any concessions over our sovereign rights. We are determined to give necessary responses against de facto interventions,” said Yıldırım.

The prime minister also said the event of the Greek citizen trying to plant the flag was similar to events in February over the Kardak islets, in which a Turkish patrol boat rammed into a patrol boat belonging to the Greek coast guard in the Aegean Sea.

In January, the Turkish Coast Guard blocked Greek Defense Minister Panos Kammenos from approaching Kardak to lay a wreath there.

“The other side should refrain from such moves. They should not take steps that will strain the relations and lead to a crisis in the Aegean for no reason. When they do so, they get a response. Populism brings no benefits to Greece. As two NATO allies, we should focus on a positive agenda,” he said.

“He loves populism. He is from the far right party. He is the leader of the party. His waywardness should not disturb the relations of the two countries,” Çavuşoğlu said, referring to the Greek minister.

Turkey and Greece have long been at odds over multiple sources of tension stemming from the Aegean Sea. There is not a border agreement between the two countries and they often come face to face over a score of disputes islets. The gravest tension occurred in 1996 over the uninhabited Kardak islets, where the two countries came to the brink of hot conflict.

Meanwhile, Greek government had no knowledge of the incident, according to spokesman Dimitris Tzanakopoulos.

“Based on the latest briefings from the Defense Ministry and the Hellenic Navy General Staff, there is no confirmation of any incident of violation of Greek territory,” Tzanakopoulos told reporters on April 16.

“Nonetheless, we will continue to investigate the matter in a calm and very serious fashion,” he added, describing Yıldırım’s remarks as “provocative and reprehensible.”